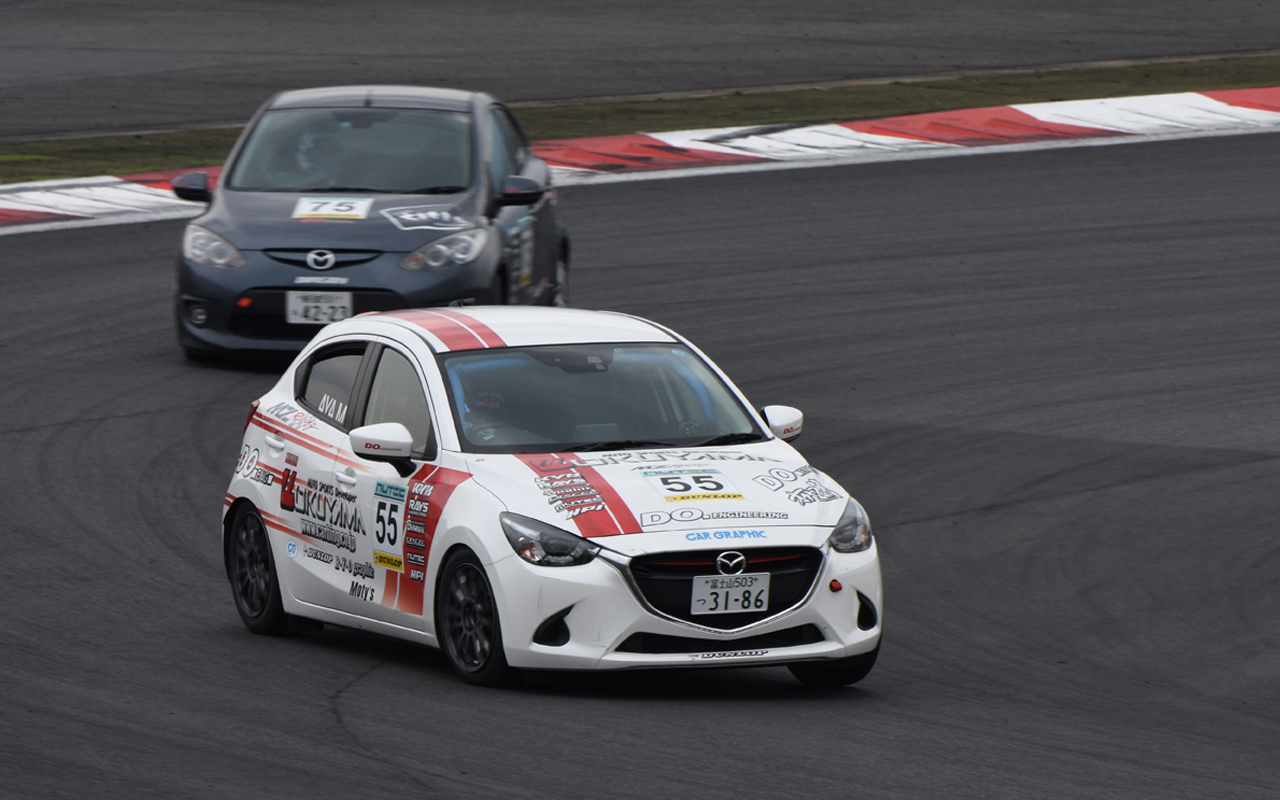 Round 5 of the 2015 Fuji Champion Race series (“Fuji Chan”) was held over October 31st to November 1st. With the exception of the NA1600 category, this would be the final round for categories in which Mazda vehicles compete and with perfect, mildly cool conditions, intense championship battles could be seen unfolding throughout the weekend.

One of those battles that garnered the most attention was the contest between old and new model Demios. #75 Takashi Nakayama, who took victory in the opening round, was the man to beat having taken the championship for 3 years running. Round 2 winner, #34 Takashi Tokiwa went into this race looking to utilize his advantage as the point leader. #55 Aya Machida, who achieved her first victory in round 3 competing in the SKY-D equipped new Demio, the “DO-ENG Okuyama Demio,” was looking to ride on that momentum and achieve a winning streak.

Although Nishiyama secured pole position in qualifying with a course record, both Tokiwa and Machida were right on his tail with less than a second’s difference between them leaving the race as anyone’s game. While Machida’s new model Demio had superior acceleration uphill and on the straight, Nishiyama and Tokiwa’s more developed machines were better in the corners. Machida made a dash out of the blocks at the start of the final race and was briefly in the lead but lost out in the ensuing braking competition and Nishiyama retook his place at the top. However, Machida would manage to get passed him within the first lap. For this final round she carried out a stunning race, taking advantage of the diesel turbo’s superior torque. Point leader, Tokiwa also managed to overtake Nishiyama in this lap to move up to 2nd. If he had managed to continue on in this position he would have taken home the championship but unfortunately he experienced some brake trouble that saw him gradually fall back down the order.

The second half of the race unfolded into a battle between Machida, who was trying to pull away, and Nishiyama, who was engaging in a fierce pursuit. With Tokiwa falling back to 3rd, whichever of the two crossed the finish line first would take home the series and, in the end, Machida managed to shake off the hectic chase from Nishiyama and achieve a 2 round winning streak. Achieving a phenomenal comeback from her 3rd place ranking she took home the championship. Stating, “I can’t express how much I want to thank the whole team,” she then went off to make preparations to depart for Aichi Prefecture to participate as a rally co-driver. There as well she would go on to achieve a miracle victory.

In the Roadster Cup NC Open, point leader Satoshi Kikuchi was unfortunately absent due to an accident that resulted in a fractured bone. #7 Yuji Takahashi, who took his first victory in round 3, achieved a 2-round winning streak to take the crown in his second year of competition. In the Challenge Class, where modifications are severely restricted, #71 Hajime Tosaka may have been absent from the opening round but he followed this up by taking 3 consecutive large-margin victories to take the title 2 years running.

On the other had, the most powerful players in the Roadster Cup NA/NB took victory in the expected order and decided the championship. In the NA6 class Fumiaki Mogi achieved a perfect 4-round winning streak to take the title for the second time in three years, having let last year’s slip out of his grasp due to an incurred penalty. #1 Takashi Yamagata, in the NA8, and #11 Yuichi Toda, each took their third win in the season for their respective classes to take consecutive championships following on from last year.

The N1 title fight that unfolded on November 1st was red hot. Last year’s champion #1 Toshiya Ohno secured pole position with a new course record, while, trailing him with 3-points, #8 Kenji Fukunaga started from 2nd with only the narrowest of margins. The final race saw these two battle it out and pass each other countless times. In the final stages, Fukunaga made it out in front in the final lap of the last corner, however, Ohno skillfully used his opponent’s slipstream to claw back the lead and achieve an edge-of-your-seat comeback victory. With this he has become the champion for 2-years running.

This year will be the last mixed N1400 / N1000 N1 Race where the first generation Demios battle it out. In this last race R.P.M/H took home the championship.