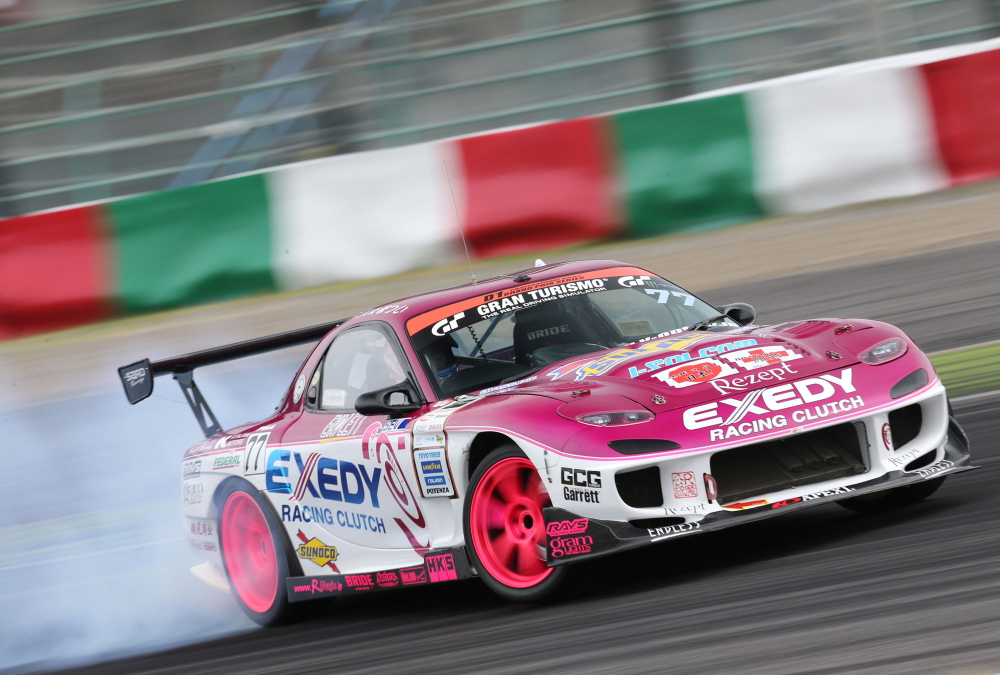 Round 2 of the D1GP was held at the Suzuka Circuit Racing Course over May 16th to 17th. There were three Mazda vehicles competing in this round: the #7 “Team RE Amemiya GruppeM” RX-7 driven by Masao Suenaga, the #77 “EXEDY R Magic D1 Racing” RX-7 with Yukio Matsui in the driver’s seat, and the spot participating #74 “Purism 7 with ORIGIN Labo.” propelled by Junji Yamamoto.

All three vehicles competed in Saturday’s “tanso” (solo) runs. Running first was #74 Yamamoto. However, in the first run, his drift entry was a little too early, breaking his rhythm. Then on the second he went off course meaning he failed to secure a high score. #7 Suenaga also started his drift shallow in the first run, which resulted in a less than superb score of 94.65. His score in the second run was also unsatisfactory and this left #74 Yamamoto and #7 Suenaga being eliminated from the tanso qualifying sessions. Yamamoto commented, “I pushed too hard in the warm up and damaged my suspension which hurt.” Suenaga also lamented, “We only had one warm up run after the road surface dried and I couldn’t fully grasp the right distance.” #77 Matsui pulled out a consistent drive in the first run and passed into through the tanso qualifying session with a 97.16 score.

In the tanso final race, #77 Matsui staggered a little in the first corner and finished in 18th. In the next day’s “tsuiso” (chasing race) sessions, he was to go up against last year’s champion, #1 Kuniaki Takahashi. Unfortunately, Matsui’s machine experienced technical trouble during Sunday’s morning practice and, due to not having enough time to make repairs, was forced to retire. Matsui stated, “I put a lot of thought into how I would drive on Sunday and was confident that I could do better but unfortunately didn’t get the chance to try it out.” It turned into a disappointing weekend for Mazda this time.