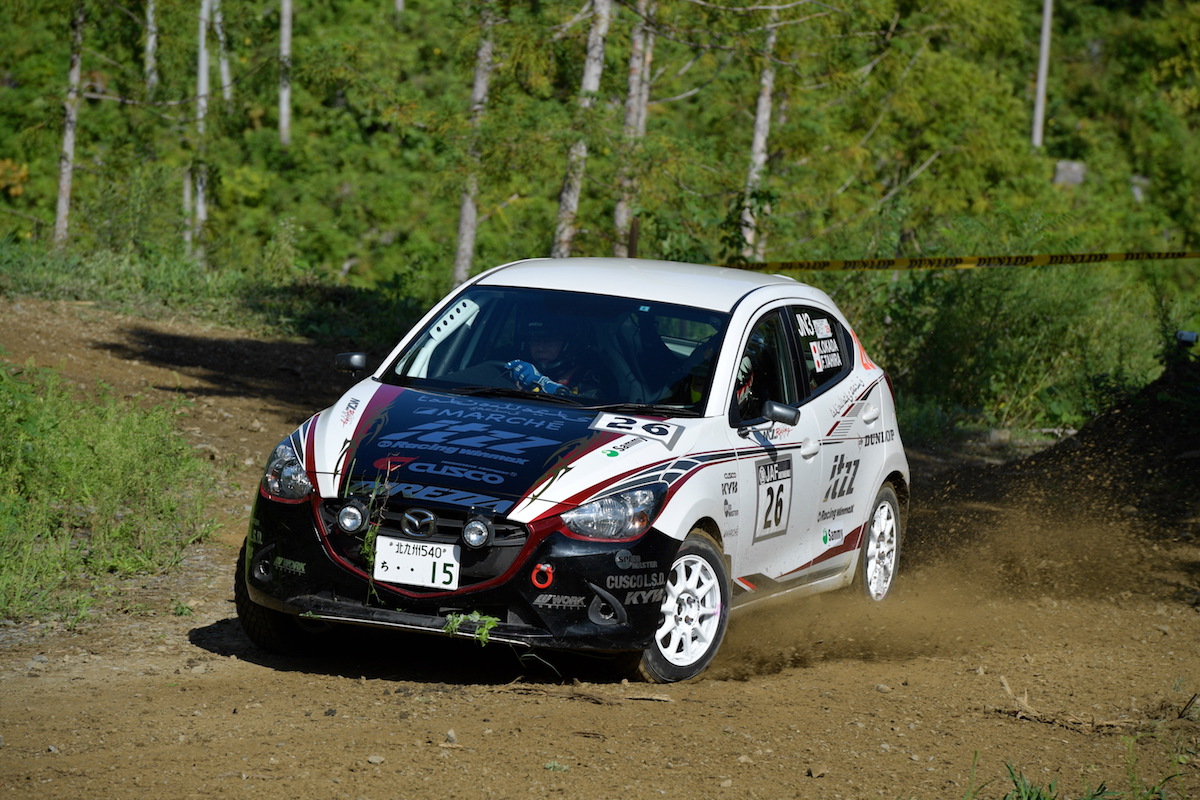 Round 7 of the All Japan Rally, The “MSCC Rally in Iwaki” was held over August 25th to 25th in the regions centered around Iwaki City in Fukushima, where Koichi Okada made a JN3 class return with his Demio 15MB and finished in class 2nd.

Although the Okada Demio 15MB made its debut in round 2, the Karatsu Rally (Saga), in round 3, the Tango Rally (Kyoto) he severely damaged his car during reconnaissance and this forced him to compete with a rental machine in the next three rallies (the Kumakogen Rally in Ehime, the Monterey Rally in Gunma and the Niseko Rally in Hokkaida) while he carried out repairs. However, for this round he would be competing with his own Demio 15MB again. During this time frame Okada had an operation to remove metal parts remaining in his body from the surgeries he had to address injuries he sustained in a crash 2 years prior, so he was competing in round 7 while taking care of his health.

The MSCC Rally centered on the service area established at Onahama Port car park and ran along gravel roads the extended northwest from there into the surrounding forests. The Gallery Stage ran through Misaki Park, that is located close to Onahama Port, and the ranches of Kanotsunodaira, where spectator points were established for the large numbers of fans from Tokyo and Southern Tohoku to see the action. With a total running distance of 410km, comprising 14 Super Stages (SS) of total 62km, the field was made up of 47 machines, with 10 in the JN3 class, including 2 Mazda 15MBs, 5 DE Demios and 1 RX-8.

Due to rain that occurred on the previous day, Leg 1’s first SS saw the tarmac covered in mud, which the Okada Demio struggled to handle and finished the stage in class 7th. However, the next stage was in gravel, which Okada is strong at and after completing all 8 stages of Leg 1, that included the Misaki Park Super SS, and two loops, he had risen to 3rd. On top of that he had reduced his difference with Yukihiro Fujita / Saiko Fujita’s DE Demio to approximately 7 seconds.

In Leg 2 he went onto engage in a fierce battle with the Fujitas and the gap opened and closed between them. Although the Okada Demio would pull ahead in the rough gravel, the Fujitas were superior in the approximately 3km high speed gravel section, which prevented the gap from closing too much. In the following 1km tarmac Super SS a fervent attack from Okada saw him achieve an impressive stage best time. After the first loop the difference had shrunk to 4.5 seconds. After that the Fujitas were 1.6 seconds in front in SS12, but Okada once again recorded a stage best in the Super SS of SS13 to bring the gap down to 3.3 seconds. Heading into the final stage, Okada changed the front and rear tires and altered the suspension settings to be fully prepared for the last spurt in the 6km muddy gravel. As a result he hammered out a class best and finally pulled in front of the Fujitas before returning to the Onahama service area.

Okada went on to say, “I was able to achieve a performance that I could be proud of in that last stage. I’m blown away that I could get in front of Fujita and ecstatic that I could pull that maximum performance out of my Demio 15mb. The handling was great and there is plenty of power coming from the car at this point. We made some progress with the ECU settings and I think with a bit more work we will be closing in on the Amano Vitz. I hope that all the Demio fans and owners continue to support us.”