48 Mazda Machines Converge for the “Fuji-Chan” Final Round 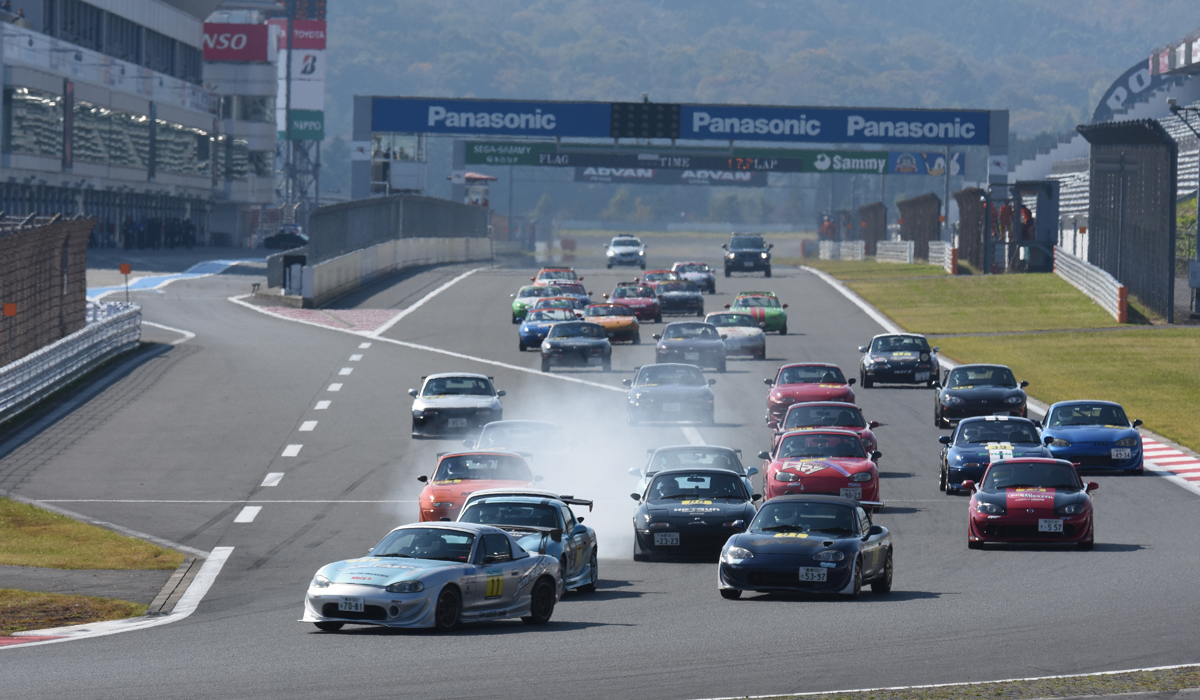 Round 6 of the 2016 Fuji Champion Race (“Fuji-Chan”), the final round of the season, was held over November 5th to 6th at Fuji Speedway, Shizuoka Prefecture. The categories in which Mazda vehicles where competing were consolidated into two races held on the 6th and 48 Mazdas competed in 9 categories, the most ever entries for this season. A number of fierce battles unfolded to create an exciting send off for the end of the season.

Race 1 consisted of the Roadster N1 class and a combination of the Roadster Cup’s (RSC) numbered NA and NB class, with a total of 32 cars running on the track. Race 2 had a varied mix of competition with the RSC NC/ND class, the Demio Race, the first generation Vitz N1000 race, the Audi A1 race, and so on, with 16 Mazda machines taking part.

This season the Fuchi-Chan races were often met with rain but the background for the final round saw the white peak of Mt Fuji set against blue skies, with a slight chill to the breeze making it perfect conditions for racing. In race 2 qualifying, ND Challenge class’ #90 Tatsuya Okahara and #21 Toshikatsu Arai, along with ND Open class’ #9 Fumiaki Mogi rewrote the course record. The evolution of the new model ND Roadster is clearly progressing.

Race 1 began at 11:50am without any major incident and the top three NB8 qualifiers, #11 Yuichi Toda, #21 Kentaro Yamahira and #91 Makoto Kamiya, who were battling it out for the title, proceeded on in their grid positions and engaged in a 9 lap battle. Getting in on this action was #0 Kenichi Obara, who was competing as a spot entry. At lap 3 he made it passed Kamiya to be running in 3rd. It turned into a tough final round for NB8 point leader, Kamiya.

Making waves to their rear was #23 Minoru Yamakawa, who had already secured his second NA6 title, having taken his first 2 years ago. Driving along at a pace faster than some of the relatively high powered NA8, NB8 class vehicles, he ultimately finished the race in overall 5th. He related, “Next season I’m going to compete in a different class so I’m really happy to have finished off this year with a good performance.”

In the N1 one make race, which saw a season maximum of 11 competitors, point leader #1 Toshiya Ono was bested by his teammate #2 Keiji Amemiya in qualifying, but in the race he made it passed in lap 4 to be running in the lead. #81 Yohei Adachi, who was also in the championship fight, also overtook Amemiya but got caught behind some RSC machines and was unable to push further up to Ono and continued to battle it out with Keiji. Having taken 3 consecutive titles Ono said, “I managed to take 3 wins this season, so it was a good year for me.”

Toda was the overall winner having come out on top of his battle with Yamahira. Having gone into this round ranked 3rd in the NB8, Yamahira also had a chance of snatching the title if he could take victory but he let it slip out of his grasp by just 0.49 seconds. With this Toda was crowned champion for the sixth year in a row. Having had to sit out one race and lose his lead in the early stages, he smilingly related “I never gave up and just enjoyed myself.”

Race 2 began from 1:50pm and was fought over 9 laps. In the NC Open, #1 Yuji Takahashi cut a perfect start from his 2nd place on the grid and shot out in front of pole sitter #8 Satoru Kikuchi. However, Kikuchi, who had already secured his 4th consecutive title, smoothly regained his position on the straight at lap 3. From then on he steadily maintained a solid gap and took a glorious final victory. Impressed by his rival’s performance, Kikuchi stated, “This year I gave up motorbike racing and just focused on cars. I really enjoyed my battle with Takahashi.”

4 cars competed in the NC Challenge class and #22 Koji Nakagiri had already taken the championship. He engaged in a tough battle with #80 IINUMA, who was competing for the first time, and the two overtook each other a number of times. Ultimately Nakagiri just managed to finish in front with a mere 0.54 second difference. With two female drivers on each side of the podium, he related, “I’m pretty happy to have been able to stand between these two.”

An intense 3-way battle unfolded in the ND Challenge Class. Okahara, who was fastest in qualifying, fell down the order due to same brake trouble, which left Arai and #3 Kodai Terashita bumper-to-bumper with 0.27 seconds between them. With the winner set to take the title it was edge-of-your-seat tense, but ultimately Arai, who was celebrating his 60th birthday, took the glory.

The Demio race unfortunately only had 3 competitors this time around and there was also unfortunately an accident in the opening lap. #75 Takashi Nishiyama, who had already been crowned champion with 4 wins in the season, was hit by a N1000 class machine and forced to retire. With this #34 Takeshi Tokiwa easily took his season first win. Following behind him was Mazda WIM graduate #6 Megumi Tsujita.

With this the entire 2016 Fuji Chan schedule came to a close but there is still the final round of the IPS (Inter Proto Series), in which Mazda internal test driver Masahiro Sato and pro driver Yasutaka Hinoi will compete, on December 3rd to 4th.