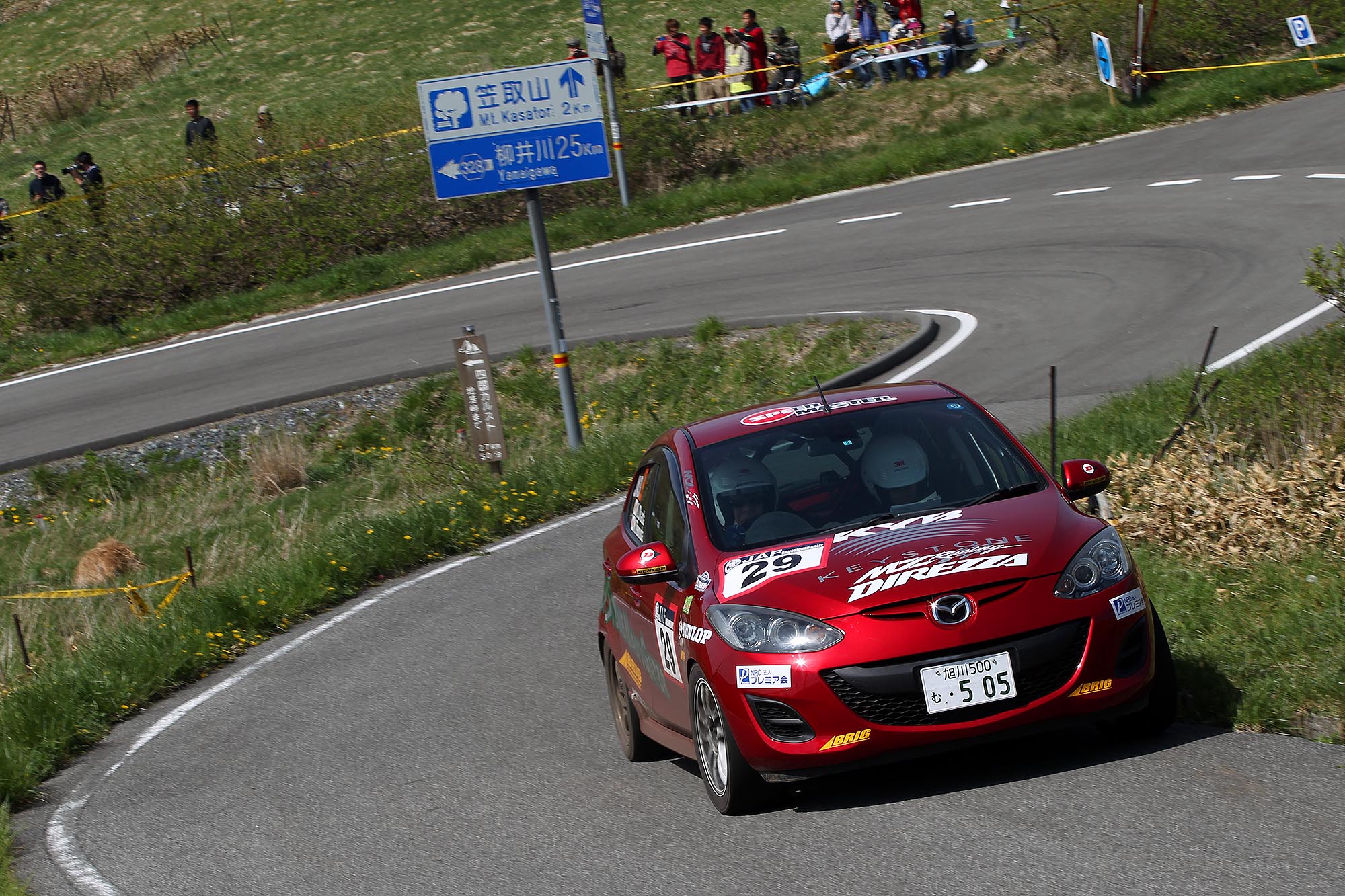 The 2nd round of the All Japan Rally was held over May 9th to 10th in the areas around the Kumakogen Ski Fields in Ehime Prefecture, and the Mazda Demio entry of Koichi Okada and Kunihiko Tsuruta took victory in the JN3 class.

Having driven the soul red painted DE Demio to consecutive victories, Okada sent these comments: “Having gone back from being a gravel rally to a tarmac one for the first time in 5 years, the Kumakogen rally is one I really enjoy to participate in. This is because this rally lets me drive a great distance, with the sum of the special stages exceeding 108km, the longest being 18km. However, contrary to the weather forecast, day 1 was met with rain. With a wet road surface, and the entire “Mikawa” section of the course covered in moss due to not having been used as a rally location, it proved to be a very nerve-racking stage. Due to that, 7 out of 11 cars in the JN6 class went off track and, with 2 of the 4 SS courses blocked by vehicles, the yellow flag was raised, meaning that they would become passed sections. Still, I was able to run at the top of the JN3 and return my machine to the service park. On day 2 the sea of clouds passed and revealed fine, sunny weather. However, as was to be expected, the reverse “Mikawa” was still semi-wet. We made the correct tire choice and it felt great speeding along the majestic “Ogawamine” stage, at around an altitude of 1500 feet. The Mazda Demio, with its excellent handling, cut the best time in every single SS this round, taking victory and building a mammoth 3 minute, 37 second margin over the machine in 2nd. I want to send out a big thank you to all the fans that came out to support, not just at the SS sections, but also here and there during the Liaisons. I’m going to work hard to be fully prepared for success at the next round, the Wakasa Rally.” Following behind Okada, coming home 3rd in the JN3 class was the Mazda Demio of Kentaro Takano and Shoichi Amago.

In addition, the Mazda RX-8 (Yasuo Matsuda / Yoshihiko Sugiwara) took 3rd in the JN2 class. Owner and driver, Mr. Matsuda, commented, “This time around there was no JN1 class established so we competed in a somewhat strange way by being incorporated into the JN2. So we kind of competed here half as a test. The main objective was to complete the race without damaging the car but we also managed to get our first experience driving the RX-8 in the wet, which was a good. It was also an important lesson in making proper tire selection. I hear there will be a JN1 class established at the 3rd round at Fukui (Wakasa Rally), so I am going to do my best to achieve a top finish there.”