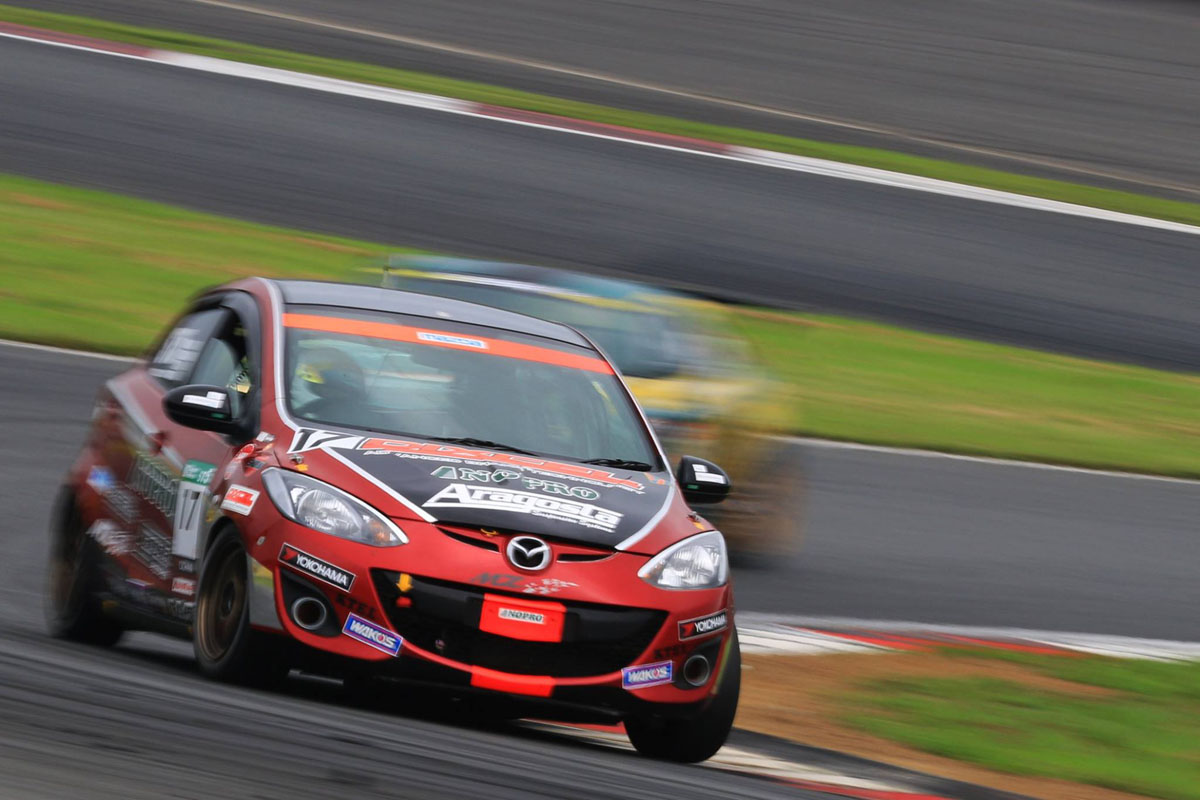 Over July 26th-27th the 3rd round of the Super Taikyu series, the SUPER TEC Fuji 7 Hour Endurance Race was held at Fuji Speedway where the “DIXCEL Aragosta – NOPRO Demio” (Toshihiko Nogami / Tatsuya Tanigawa / Tatsuya Nogami / Kenichi Ohara) took 2nd in the ST5 class, their second podium in a row at Fuji.

Last year the NOPRO Demio achieved it’s first victory at Fuji Speedway and, with the intention of repeating that performance, they went into the race with the same driving line up this year. From 6th place, the veteran, Tanigawa took the wheel for start of the final race. From here he immediately jumped up one place to 5th. Although unable to match the speed of the 4 leading Fit 3s and Fit 2s, he focused on competing the long 7 hour race ahead and, while pushing the Demio’s cornering performance to its utmost limits, carried out a tough 2 hour 20 minute stint (including one stop for refueling) without falling behind the pack. He handed the wheel over to Tatsuya in 4th place. Tatsuya displayed a composed drive in the hottest part of the day and when one of the leading cars dropped behind he jumped up to 3rd. After an approximately 1-hour stint he passed the baton to Ohara. Under hectic course conditions, Ohara slowly widened the gap between he and the Fit 2 in 4th and, after driving 2 stints, once again handed the car over to Tanigawa. As the two Fit 3s in the lead now had a more than 1 lap margin, Tanigawa wasn’t able to raise their position any further. However, he continued to widen the distance between them and the cars behind. After this he gave the reins over to the last driver (and team principal) Toshihiko Nogami. While paying close attention to the condition of his straining machine, Nogami drove passed the checkered flag in 3rd. Following this, one lead vehicle was disqualified for rule violations and their final placing was raised to 2nd.

In the ST-4 class, the #88 “Murakami Motors Roadster” (Hiroyuki Murakami / Takeshi Wakiya / Keiji Amemiya / Masanobu Oi) started from 15th but wasn’t able to pick up its pace and fell down the order. Still, they kept up a steady drive and every one carried out their stint, even when faced with differential problems, and they brought the car home in 17th. The #54 “TCR Roadster” (Teruaki Kato / Tsubasa Kondo / Daisaku Kobayashi) started from 21st but at about the 1 hour mark was forced to pit with technical trouble. After carrying out repairs they returned to the race and Kato and Kondo carried out a cool-headed run right until the 7 hours were up and they had passed the checkered flag in 7th. In the ST-3 class the “Team Shuji Ikeda RX-7” competed for the first time after a long hiatus and began from class 8th. Right up until the 6-hour point of the race the Super Taikyu was treated, for the first time in a while, to the electrifying sound of the rotary engine. Unfortunately, with one hour to go, the RX-7 was forced to retire due to machine trouble. While the Roadster may have struggled with a lack of power at the high-speed circuit of Fuji, the next round will be at the home course of Murakami Motors, the Okayama International Circuit, and there are high expectations for the Roadster’s success there.

Photo by S. Hattori and NOPRO