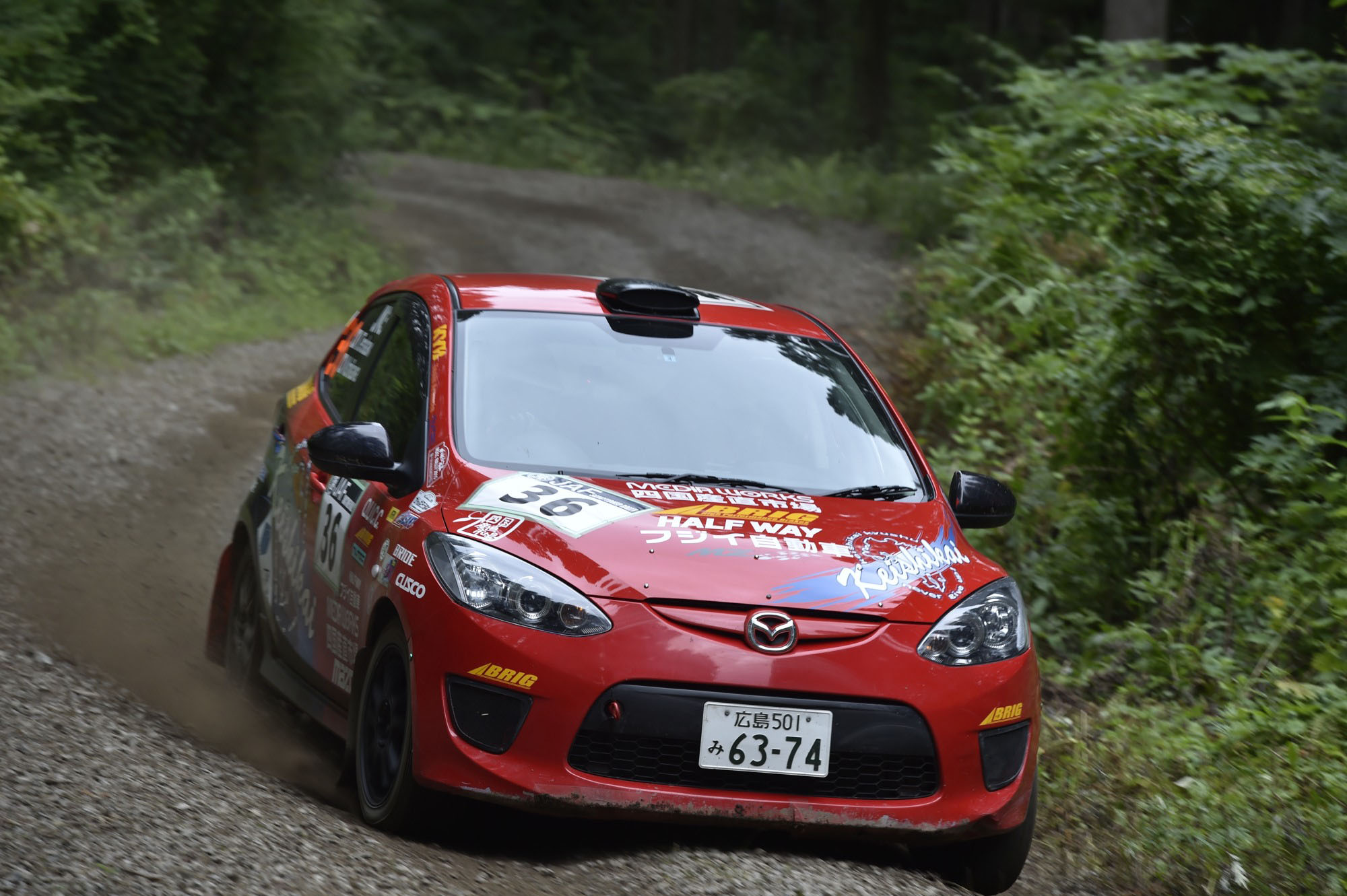 Round 5 of the All Japan Rally, the “Ganbaro Fukushima MSCC Rally 2015” (gravel), was held over July 23rd-26th in the areas around Tanagura, Fukushima Prefecture, where the Mazda Demio of Kazuhiro Terakawa and Miyoko Ishikawa took victory in the JN3 class. This makes it consecutive victories for them following the last round at Rally Toya. The point leader of the same class, Koichi Okada, was forced to retire in Day 1 due to a damaged fuel tank. With this Terakawa has leapt up to 3rd in the championship point rankings.

We received the following summary from Mr Terakawa: “Fukushima was the first location I ever competed at and the road surface is pretty difficult for me so this was a big challenge. Day 1 consisted of two loops of a 3-stage course. SS1 was a very slippery and windy, narrow course. SS2 was quite difficult, being a relatively long, 11km twisty course that also includes paved sections. SS3 on the other had, was comparatively easy to drive on. As I was feeling very unconfident of my abilities on the rough road surface, I pushed hard in the first loop to check what kind of times I was capable of. Just as we were looking to start SS1, though, our intercom, which until then had been working fine, suddenly failed. My co-driver tried her best to yell the pace notes as loud as possible, but at pivotal points I couldn’t make out what she was saying and this meant that I couldn’t push anywhere near as hard as I wanted. Under those circumstances, by the end of SS3 I was about 4 seconds behind point leader, Okada. However, at this point Okada had some trouble with his machine and I unexpectedly moved up into 1st. For the second loop I was tempted to push as hard as I could to test my own limits, but this year we are placing top priority on our class ranking, so I held back and just focused on holding onto our position. That being said, I actually had a hard go of it on the difficult road surface and lost more time than I expected. The competition began closing in on my time.

Day 2 consisted of 3 stages of difficult courses combining slippery, narrow, dirt roads and narrow, treacherous paved streets; 2 short, high-speed downhill dirt runs; and 2 short 1km paved runs. Due to the fact that it was very difficult to reduce the time difference in the short SSs, the rally would be decided on the 3 tough, long stages. Although I was driving with my mind focused on maintaining my margin, I struggled to get into my rhythm, and couldn’t extend the difference as much as I hoped. Due to that, Takano began to close in on me, which caused me to get a little flustered, but due to the margin I built up in Day 1 I was somehow able to stay ahead of him and achieve a consecutive victory. It was an extremely hot, harsh rally, but I was able to run with a lot of confidence due to all the support I received from the Shikoku Sanchoku Ichiba Rally Team. I want to send out a big thank you to them. I managed to grab 1st place, but it was a rally full of challenges regarding things like the optimal driving method and the settings of the car. I’m going to work to improve my performance to ensure that, even on rough road surfaces, I can achieve times that I can be satisfied with.”

In addition to this, coming in 2nd in the JN3 class was the Demio of Takano / Amano, 3rd was the Karakama / Matsuura Demio, 4th was taken by the Fujita / Fujita Demio, and 5th was secured by the Ito / Koizumi Demio, making the top 5 finishers all Mazda machines.