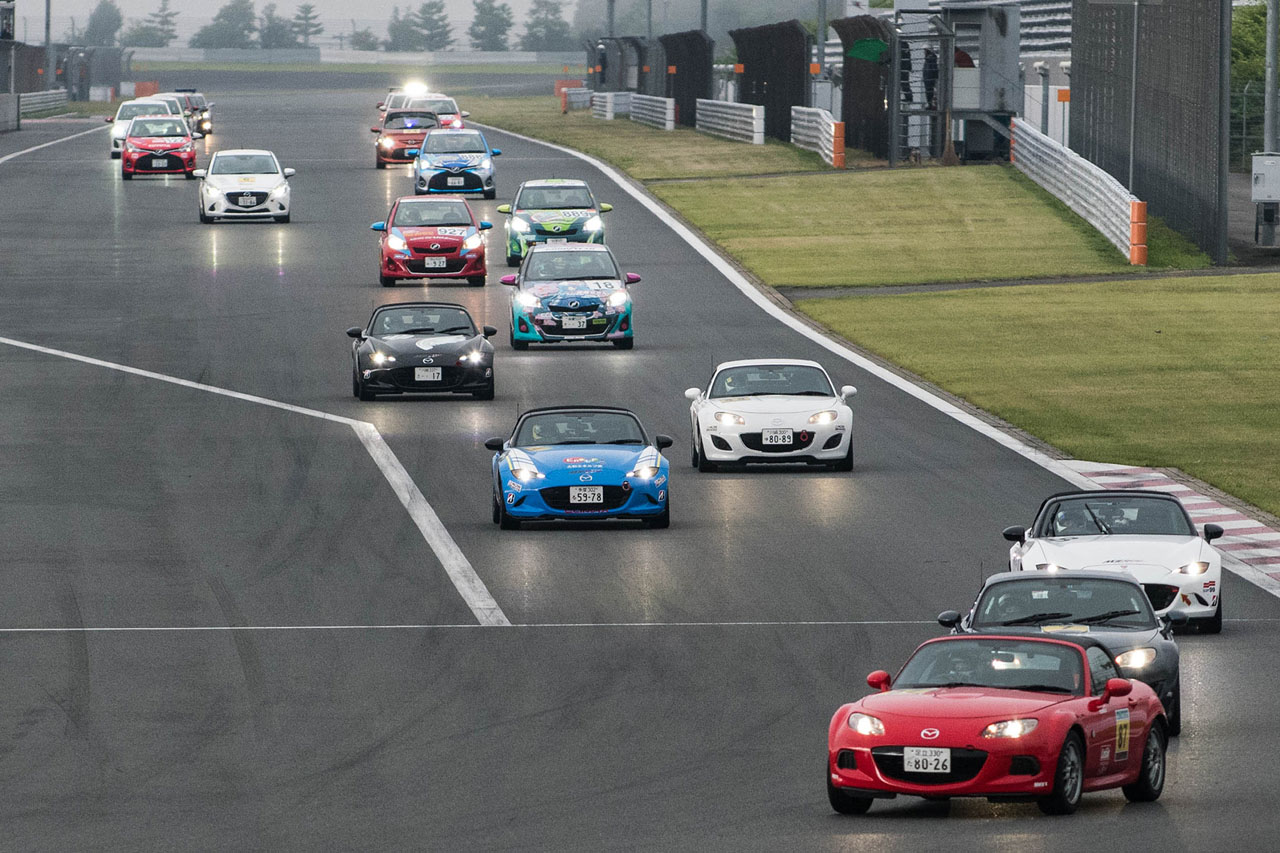 On June 25th, 2017, the female only “Ladies No.1 Race” (L1) was held at Fuji Speedway, Shizuoka Prefecture, where 5 classes consisting of Mazda Roadsters and Demios driven by 24 female racers competed. Grabbing the glory in this first race was Sayaka Kato in her NC Roadster.

The day of the race unfortunately met with overcast conditions. However, although the 20-minute qualifying session began at 10:35am on a wet road surface, by the end of the session it began to dry and the best lap was re-written a number of times.  In the NC Challenge Class #87 Eriko Yamamoto, who took part in the Roadster Cup race on the previous day, marked down a 2 minute 17.465 second time to grab the first pole position of the series. Before the race began about 80 participants of the “WOMEN IN MOTORSPORT Driving Lesson” that was held in the venue car park, came out to watch. Over 100 female motorsports enthusiasts gathered at the control line to cheer on the racers.

Rain that had been falling let up before the final race began at 3:09pm and the 9-lap battle was held on a mostly dry road surface. Of course there were still some wet patches remaining, which made for difficult racing conditions. Taking the lead after the opening lap was the NC Open Class’ #7 Yumiko Sekizaki who jumped up from a 2nd place qualifying position. She broke late at Dunlop Corner and made a superb pass. After being passed, Yamamoto fiercely pursued from 2nd. Behind them a 4-car battle for 3rd unfolded between the ND Challenge Class’ #8 Anna Inotsume, who was running in 3rd and the same class’ #4 Marie Iwaoka, #117 Hiroko Komatsu and the NC Challenge Class’ #45 Sayaka Kato. These cars changed positions multiple times throughout the race.

To their rear in the Demio class, #6 Eri Okamura was in class lead, with #34 Megumi Tsujida, #787 Yumi Hoshi, Taiwan Born #38 Hóng Míng Wèi and #244 Maya Oto following behind. The race took a large turn in lap 7. At he hairpin (ADVAN corner) the fiercely pursuing Yamamoto collided with Sekizaki in the lead. This put an end to Sekizaki’s race and Yamamoto also fell significantly down the order. With this the leader of the second group, NC’s Kato, jumped into the top spot while the ND’s Inotsume was hot on her heels. In lap 9, the final lap of the race, Inotsume passed Kato at the last corner (Panasonic), but at the exit the acceleration for the 1.5 litre ND was outdone by the 2.0 litre NC.  At the final straight Kato was side by side with Inotsume and retook the lead to pass the finish line with a mere 0.083 second difference between them. With this Sayaka Kato took the first ever overall win of the all-female “L1” series.

In the other classes, Sekizaki Yumiko took victory in the NC Open (6-laps mark the end of the race so she is recorded as completing the race), Sayaka Kato was obviously the NC Challenge winner, Anna Inotsume was the ND Challenge class victor and Eri Okamura grabbed the Demio class glory.