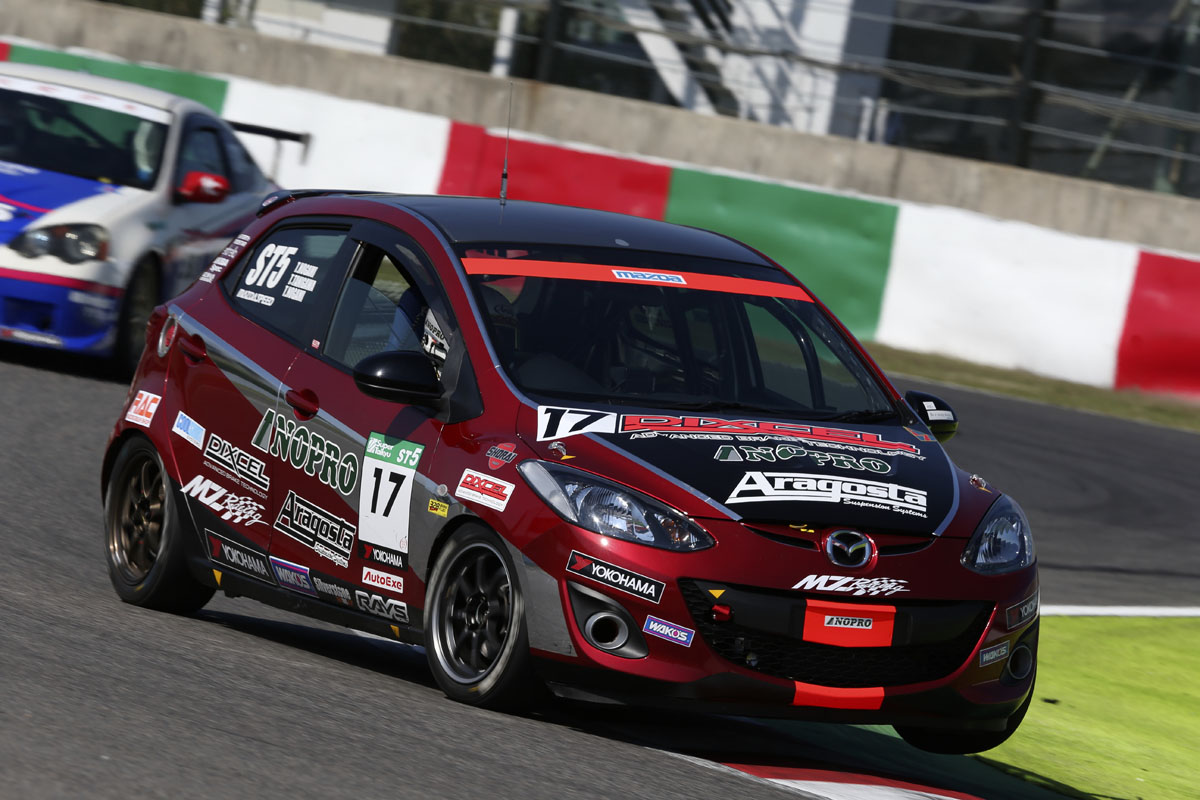 Round 5 of the Super Taikyu was held over October 24th-25th at Suzuka Circuit where the NOPRO Demio, having made a complete recovery since suffering a major crash at the previous round in Okayama, went on to finish in 4th in the ST5 class. In the ST4 class the TCR Roadster completed the race in 11th and the Murakami Motors Roadster came home in 12th.

Due to this race being held in conjunction with the FIA World Touring Car Championship (WTCC), the 140 minute race was held under a special format in which the STX – ST3 classes were classified as Group 1 and the ST4 – ST5 classes as Group 2 with a compulsory minimum of 2 tire changes. For this reason, qualifying sessions were not held and the starting grid was decided according to the point rankings. The final race for Group 2, and the Roadster and Demio, was held on Saturday.

Ranked 2nd in the series, the “DIXCEL Aragosta – NOPRO Demio” (Toshihiko Nogami / Tatsuya Tanigawa / Tatsuya Nogami) began the race from 2nd place, its highest grid start this season. The starting driver was Tanigawa, who has made a complete recovery since last round’s accident. Aiming for a shot at pole from the rolling start he managed to pass the first corner in the lead. However, in the high-speed section following the hairpin, he lost his position to the Fits, with their superior straight speed and by the end of the first lap was in 4th. Despite setting times that exceeded last year’s course record, the Fits were also running at a similar pace and after a tough battle he ended his stint in 5th and went in for a driver change. Taking the wheel next, Tatsuya Nogami carried out a solid 50-minute drive and went into the pits. After completing a tire change and re-fuel in the shortest time possible, Tanigawa took the reigns and went back out onto the course in 6th place to resume their tenacious race. After every competing vehicle had completed their pit works they had moved up to 4th place and despite struggling with tire wear they maintained their position and safely passed the checkered flag. Although they have slipped to 4th in the point rankings, with a narrow margin they will still be in the fight for a top spot in the series when they head into the final round at Autopolis.

Within the large melee of the ST4 class, which had a total of 19 cars competing, the #54 “TCR Roadster” (Teruaki Kato / Tsubasa Kondo / Daisaku Kobayashi) started from 9th and the #88 “Murakami Motors Roadster” (Hiroyuki Murakami / Takeshi Wakiya / TOMISAN) began the race from 12th and immediately climbed through the pack in the early stages. After this, Murakami engaged in a fierce battle with the S2000s and Abarths but, due to power steering trouble, he lost a great deal of time in the pits. In the second half of the race, Kato in the TCR Roadster and TOMISAN in the Murakami Roadster entered into a fight for 11th, with the two roadsters swapping positions numerous times. Ultimately it was the TCR Roadster that came out on top and finished the race in 11th.