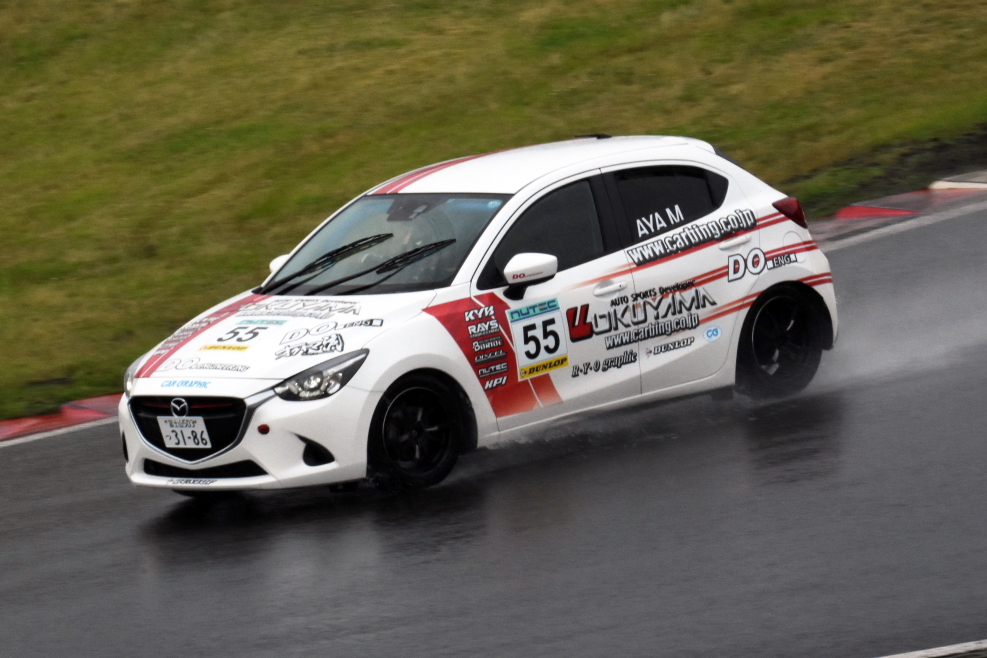 Round 3 of the Fuji Championship Race series was held over June 20th – 21st. All eyes were focused on the races for registered NC Roadsters and Demios. With rain continuing to fall right from the early morning, each passing shower made it difficult for the machines to keep their footing.

Aya Machida, who entered the race in a SKYACTIV-D 1.5 liter turbo diesel engine mounted new model Demio, the #55 “DO-ENG Okuyama Demio,” somewhat anxiously stated, “My situation has changed a lot since last year and I’ve been struggling to find enough opportunities to race the car.” However, she managed to secure 3rd place on the grid in the qualifying sessions and planned to catch the leaders in the final race. In this race the rivalry between #75 Takashi Nishiyama and #34 Takeshi Tokiwa continued and, for the first time, Tokiwa managed to grab pole position. Despite ceding the lead in the final race, Nishiyama managed to catch up when the rain made visibility difficult and kept an eye out for a chance to make his move. Machida was slightly slow off the line and despite being in an unknown situation due to this being her “first time to really drive the Demio under wet conditions,” she managed to maintain her 3rd place until the finish line and grab some important points. The battle between Nishiyama and Tokiwa continued right up until the final lap. After making a gearshift mistake coming out of the first corner, Nishiyama then stumbled at Coca-Cola Corner and Tokiwa coolly overtook him to make this his first victory in the 4 years he has been competing. Tokiwa credited this win to his significant experience stating, “I used to be an official here, so a lot of my friends came out to support, which helped me continue. I have quite a bit of experience in the rain so I didn’t feel uneasy at all.”

In the Open Class, that allows for a large range of modifications and in which the NC Roadsters are competing, there was a close fought battle in qualification between #64 Atsushi Shibamoto, who took victory in the opening round, and #8 Satoshi Kikuchi. This intense clash continued into the final race. In lap 6 an accident occurred at 100R. With Shibamoto judged to have pushed Kikuchi off course, after he passed the checkered flag in 1st, he had 40 seconds added to his final time, dropping him down to 3rd. Victory thus went to Kikuchi and coming home in 2nd was #16 Mamoru Yokoyama. Making his season entry in the Challenge Class, which only allows limited modifications, was last year’s champion #71 Osamu Tosaka. Having built up an almost 2 second margin over the competition in qualifying, it seemed like he would easily run away with the race. However, in the final, #70 Toshiaki Utsumi gave a determined chase and by the closing stages that difference was only 0.8 seconds. Utsumi later commented, “I might not be able to fully keep up in the dry but I’m finally getting the hang of how the car feels.”

Round 4 will be held over August 29th-30th. Stay tuned for the next report!