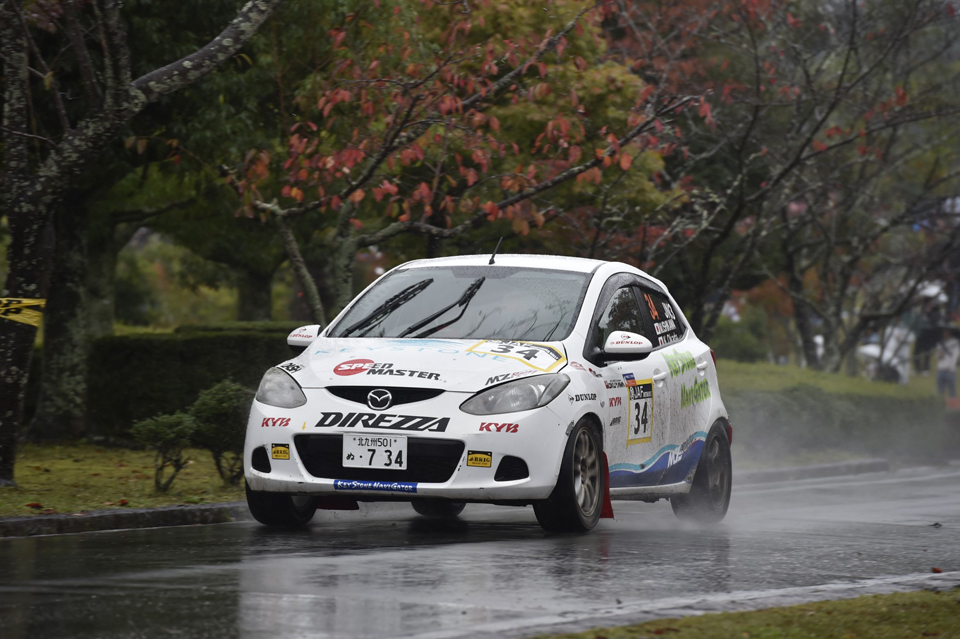 Round 9 of the All Japan Rally Championship, the Shinshiro Rally, was held over October 31st to November 2nd around Shinshiro General Park in Aichi Prefecture and Koichi Okada (Demio) took class victory in the JN3 while Akinori Nakamura grabbed victory behind the wheel of his RX-8 in the JN1 class. A perfect end to the series for these two drivers. This became a double-win winning streak for Okada and Nakamura after both took victory at the previous round, the MCSC Highland Masters (Gifu).

The all-tarmac Shinshiro Rally is known for the efforts of local authorities and the large number of motorsports fans who come out to watch it. With the announcement that this year the president of the Toyota Motor Corporation, Akio Toyoda, would drive an official car and that former WRC star Tommi Mäkinen (FIN) would be making demo run, there was even more anticipation than usual leading up to the event.

Okada relayed, “I achieved a winning streak from the previous round. This Shinshiro Rally was a heavy wet battle under bad conditions where you couldn’t lose concentration even for a second. I attacked the course with a mixture of prudence and audacity and managed to mark off the best times in all six SSs of day 1. By the halfway point I had built up a 43.4 second difference with the vehicle in 2nd. Even though the rain let up on day 2, due to the tree coverage along the Ganpo forest road, the course remained wet. In the SS7 here I was able to build up a 49.7 second lead with the next chasing car and with a total 1 minute 33 second time difference I was in 10th overall. I managed to get through the 5 remaining SSs saving tires. Due to this I’ve managed to finish the last two rounds with victory, which is just an awesome feeling. I finished this season at 2nd in the rankings but, of course, next season I will be aiming to be champion of the Demios. I really want to thank all the Mazda and Demio fans for their staunch support throughout the whole year.”

The RX-8’s Nakamura commented, “As expected the Shinshiro rally was pretty tough. The weather was bad at times and the course was slippery. I had to drive as carefully as possible just to ensure I wouldn’t end the race in a retirement. When the weather let up a little I was able to drive the high-speed course in a way that gave full play to the abilities of the RX-8. On this kind of course I can drive at a pace that is right up there with the 86 and BRZ in the JN5. I was also surprised that Iwaki, who was competing in the same JN1 class in the Demio, managed to mark the top time in the long stage, SS7. This year I manage to take victory in every tarmac rally that I competed in and I’m really relieved I could finish with such a great result.”

Okada and Nakamura will be participating in the Mazda Fan Festa in Okayama on December 7th. It will be great to hear all they have to say on the stage there.