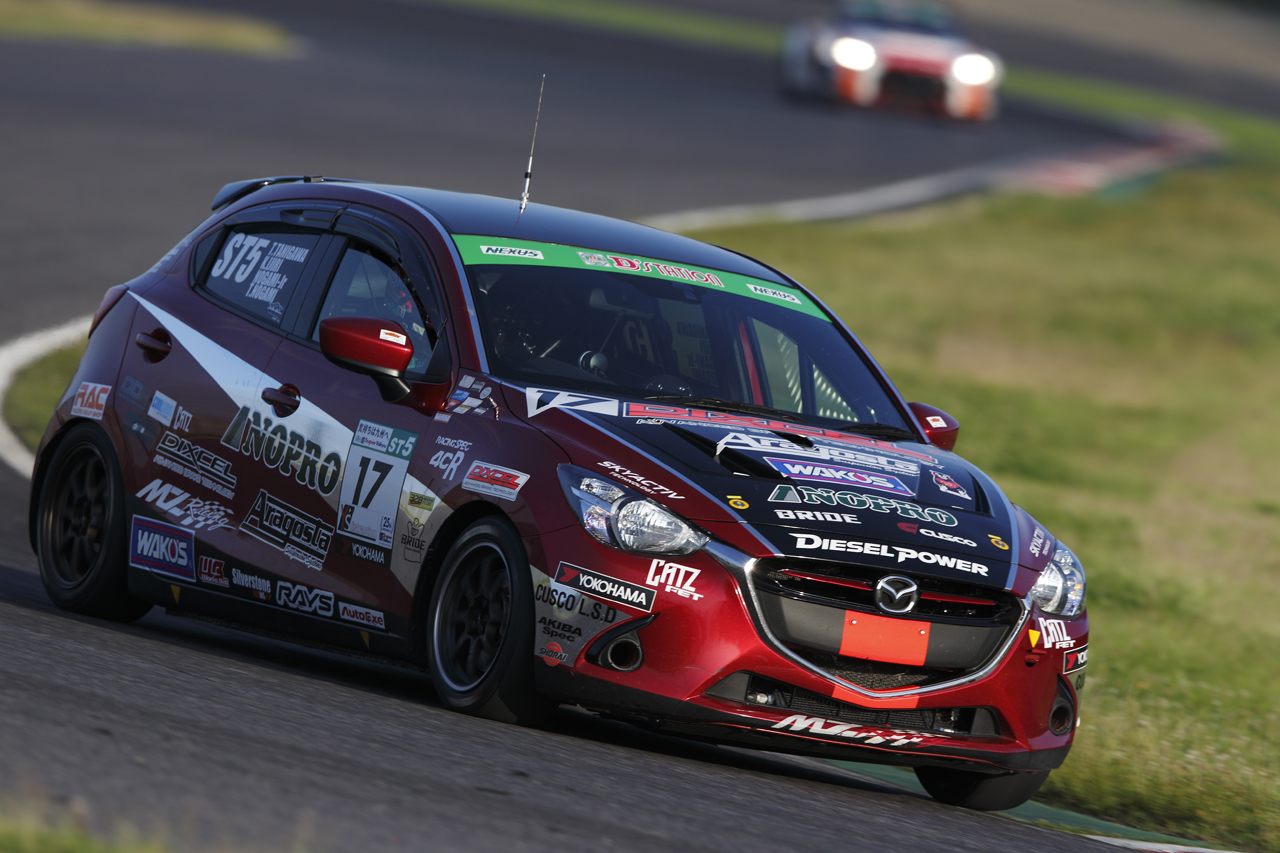 Round 3 of the Super Taikyu was held over June 11th to 12th at Suzuka Circuit where Team NOPRO’s Demio SKYACTIV-D (Tatsuya Tanigawa / Kaoru Ijiri / Tatsuya Nogami) took ST-5 class victory. This was the first victory for a domestically produced diesel car in the series.

This round was the first to employ a new format where the top three starting places in each class would be decided in official qualifying, while the remaining vehicles’ grid position would be decided through a qualification race in which the remaining 23 vehicles competed. This meant that in the ST-5 class, the top three were decided through official qualifying and then the remaining 8 competitors carried out a qualifying race on the 11th. Having been outgunned by three Fits for the top spots, all four Mazda competitors would take part in the grid deciding race. The #88 Murakami ND Roadster (Hiroyuki Murakami / Katsuhiko Tsutsui / Takeshi Wakiya) came out on top of this race, with the NOPRO Demio following behind in 2nd, thus securing 4th and 5th on the grid respectively. The #66 ODULA Demio (Takayuki Takechi / Hiropon / Tomohiro Inoguchi) experienced technical trouble early in the qualifying race and were unable to qualify. In the ST-4 class the TCR Roadster (Teruaki Kato / Tsubasa Kondo / Yui Tsutsumi) passed through the qualifying race without issue and advanced into the final event.

The final race began with light rain beginning to fall. The #88 Murakami ND Roadster was the only competitor in the ST-5 class to head out riding on rain tires. However, the rain did not immediately become stronger and they were forced back into the pits dropping them back down the order. Going head-to-head with the Fits sporting dry tires was the NOPRO Demio SKY-D that saw starting driver, Tanigawa unfazed by the difficult semi-wet track conditions to be right on the heels of the race leaders. After about 1 hour had passed, the rain began to increase in intensity and the top group went into the pits to change to rain tires. The Demio also went in to change tires, refuel and hand the car over to Ijiri. From here out, Ijiri effectively took advantage of the diesel’s fuel efficiency and carried out a mistake free 2-hour stint to see them move up to 2nd place. With around 1 hour remaining he handed the wheel over to Tanigawa who went back out onto the course still in 2nd. A few laps later the #69 Fit that was running in the lead went in to make their final pit. Although the order did not change at this time, Tanigawa, who’s tires had completely warmed up, pushed his machine to its limit and manage to catch the Fit on the main straight as it was leaving the pits and moved into the lead. Tanigawa went on to build up an approximately 20 second margin and continue to tick off laps at a steady pace. Although his rival closed that gap to about 5 seconds in the last few laps, Tanigawa would again lift his pace. The NOPRO Demio SKY-D ultimately passed the checkered flag with an 11 second margin over the competition and secured its first victory. While the gasoline engine machines pitted 3 times to refuel, the NOPRO Demio took advantage of its superior fuel efficiency and was able to get through with just 2. It could also be said that they were helped by the wet conditions, which were kind to the tires and aided them in achieving this first win.

The Murakami ND Roadster looked set to finish the race in 7th place but unfortunately experienced electrical problems in the final lap. In the ST-4 class the TCR Roadster completed the race and finished in 13th.