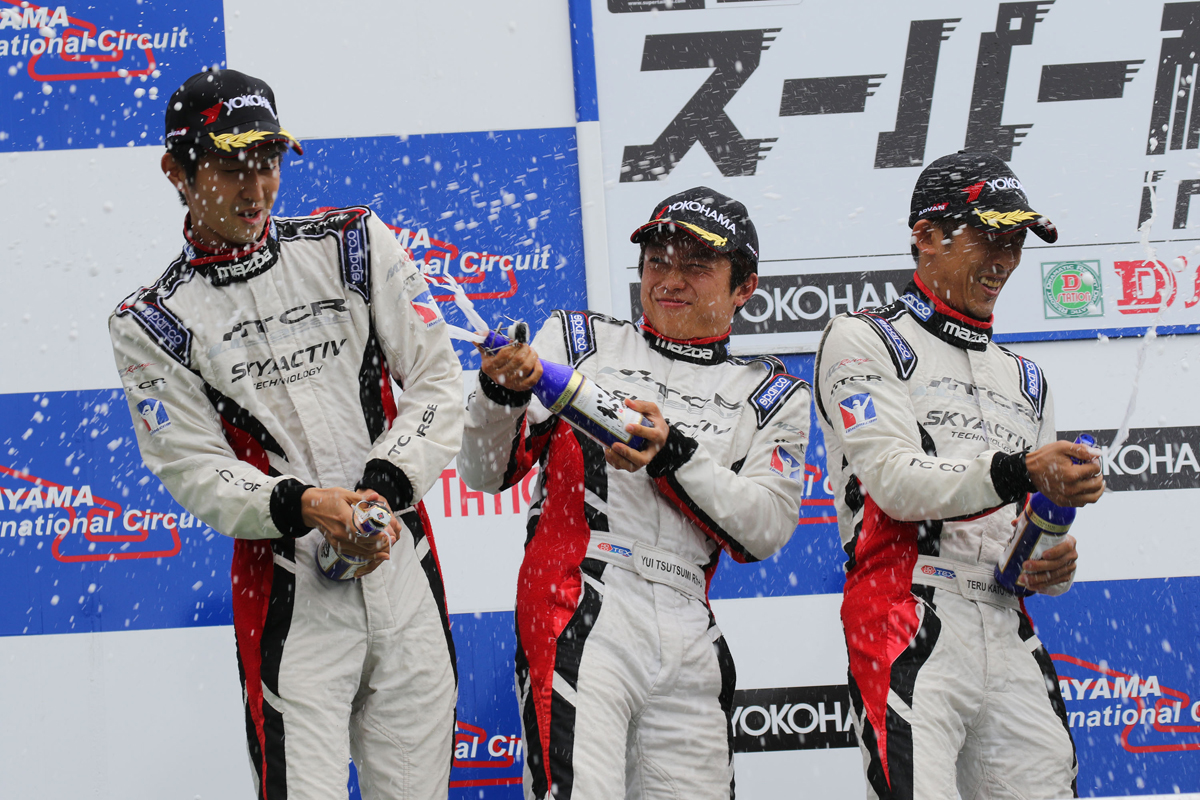 The 3-hour round-5 race of the Super Taikyu series was held on October 23rd (Sun) at Okayama Circuit, Mimasaka city, where TCR Team’s NC Roadster (Tsubasa Kondo / Yui Tsutsumi / Teruaki Kato) competed in the ST4 class and achieved their best result of a 2nd placed finish. After the race was concluded the top finishing car was demoted, which brought the #54 TCR Roadster up into 1st place. This is the first S-Tai win for the team since they took on the series 3 years ago and this unexpected first victory saw the entire team burst into ecstatic celebrations in the pits.

The ST4 class, in which the TCR Roadster competed, is for 2-wheel drive, naturally aspirated, vehicles between 1.501 and 2.0 liters displacement. The Roadster’s main rivals are the Toyota 86 and Honda S2000, which have superior engine power, and this category has become synonymous with its rather large field of 22 competitors who jostle it out in each highly competitive race. The TCR Roadster began competing in this class from 2014 but has had a hard time making it into the top group. The Roadster’s strong point is that it has a well-balanced, light chassis that results in nimble handling. After a number of remakes the team achieved the optimum settings around mid-season and from round 4’s 9 Hours of Fuji the machine’s performance rapidly improved. From then on the prospects of a podium finish, something that before that point seemed far out of reach, became a reality.

Team representative, Teruaki Kato placed Tsubasa Kondo, who became this year’s Porsche Carrera Cup Japan champion in that series’ round 5, into the position of A-driver. Taking the wheel as B-driver was Yui Tsutsumi, who just represented Japan at the recent Global MX-5 Invitational and took 3rd place going up against some of the world’s best. This saw A-driver, Kondo place 5th in qualifying and B-driver 14th with a mere 0.5 second difference with Kondo. The accumulation of the two times meant they would begin the race from 10th on the grid. When they were lining up on the grid, their rival teams offered words of encouragement like, “You guys really got faster, hey? It’s hard to keep up,” and “I’m surprised how fast the Roadster can be. Let’s have a good race.” The TCR Roadster had suddenly begun to garner a lot of attention.

Team representative, Kato, stated on the grid, “It’s taken us 3 years but we’re finally at the point where we can showcase the true performance of the Roadster. I think it will be clear if you keep your eye on Tsubasa (Kondo) and Yui (Tsutsumi), the improvement in our young drivers has been very steady. The ND Roadster is undeniably an appealing car and its performance is clearly built up through close battles that also make the team and drivers stronger competitors. That’s why we have continued to compete in the ST-4. We’ve finally been able to hold our own up against the other competitors so I want to carry out a race on an equal footing.”

Taking the wheel for the start of the race was Kondo. Starting from 10th place on the grid, a number of rivals spun out at the first corner and he immediately jumped up to 5th. After shaking off the pressure from the machines to his rear, he passed the car over to Kato. Kato then ticked off a number of laps at a steady pace before going into the pits in 4th place and changing driver to their anchor, Tsutsumi. Riding on the team’s momentum, Tsutsumi made it passed a rival to move into 3rd and then proceeded steadily, unfazed by the pressure coming from behind and looked for an opening to jump up even further as the race headed into its closing stages. At that point the car that had been running alone in the lead got caught up with the machine in 2nd. The top running 86 then fell out of the fight for the podium. After moving into 2nd place, Tsutsumi struggled a little as the Roadster began to lose tire grip but with 20 minutes remaining a full course yellow was called due to oil on the track and the safety car was dispatched. Cleaning the oil from the course took longer than expected and the race finished behind the lead of the safety car. With this the TCR Roadster finished 2nd and was provisionally in a place to stand on the podium.

Having taken the responsibility as anchor driver, Tsutsumi related, “We went with a strategy of not changing tires and when I began to lose grip towards the end of the race I began to get a little anxious. The machines to my rear were beginning to close in and I thought as soon as the SC was removed I would have a hard time fighting them off. In the end though we were a little lucky and came away with 2nd. I think this was a hard earned 2nd place and I want to aim for victory in the last round.” After this, however, the provisional results were released stating that the top finishing machine was handed a penalty and dropped down to 3rd, which meant that the #54 TCR Roadster was lifted into the top spot. After finding out the result the crew and drivers burst into cheers of elation. After that the TCR Roadster was officially announced ST4 class winner. “If you work hard and don’t give up there is no goal you can’t achieve.” This was a race that epitomized those words.

The #88 Murakami Motors Roadster that started from pole position in the ST5 class unfortunately met with driveline trouble and fell back down the order. The #17 NOPRO Demio SKY-D was briefly running in 3rd but later dropped down the pack due to turbine issues, while the #37 Demio complete the race in 9th. The #66 Demio 15MB finished with a season best 4th place.