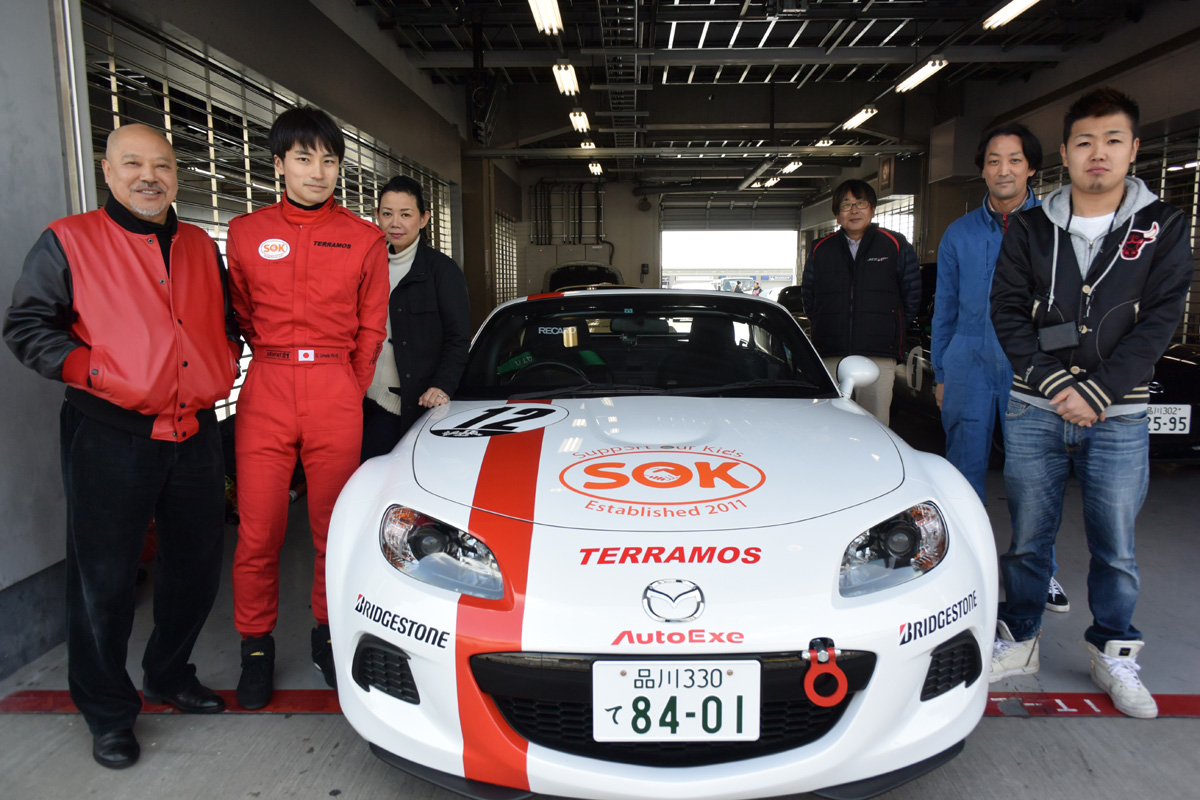 On March 15th (Sun) a special round was held for the Roadster Party Race II as part of the ENDLESS Circuit Meeting that took place at Fuji Speedway.

A total of 14 entrants took part, with 5 cars in the NC, 6 in the NC2 and 3 in the NB. In this special round all eyes were focused on Tsuyoshi Umeda, who is making his party race debut as a training driver for team TERRAMOS, led by Mr. Le Mans himself, Yojiro Terada. When he was introduced to the other competitors at the drivers’ meeting held before qualifying, Umeda received a very warm welcome from everyone.
The 30 minute qualifying session was held from 10:45am on a dry road surface and under slightly cold conditions of 5°C. Each car entered the course, one after the other and began the time attack. As early as the third lap from the start of qualification, Umeda had laid down an approximately 2’10” time, which Koichi Ishii followed up with an approximately 2’11 to leave the two battling it out for pole position. Continuing behind them, Terumasa Moriyama and Tsuboi managed to tick off times of 2’12”0, but struggled to break the 11” mark.
At approximately 15 minutes into the qualifying session, Ishii went into the pits sitting at 2nd fastest. While they carried out adjustments to the air pressure in the tires and cooled down the car, he waited for the perfect moment to carry out his final time attack. Sitting at provisional top place, Umeda also went into the pits to adjust his tire air pressure, get some advice from Mr Terada and prepare for his final attempt. Then, at the final 5-minute mark, these two drivers each went out onto the circuit.
In the end it was Umeda who cut out a new time of 2’09”72. With this, the young driver managed to secure pole position with a time that rewrote the course record for the Party Race. Qualifying 2nd was Ishii, who couldn’t manage to improve his time, and in 3rd was Moriyama.

The final race was contested through 6 laps. Heading into his race debut having secured PP, Terada went out onto the starting grid after receiving some indispensable advice on standing starts from Team Principle Terada. Launching into the lead at the first corner following the extinguishing of the start signal was pole sitter Umeda, while Ishii san found himself embroiled in traffic and falling down the order. After this, Umeda displayed a solid pace, gradually pulling away from the pack and by the end of lap 1 had built up a difference of 1”97 with 2nd place running Tsuboi. Keeping up this pace, Umeda had built up an approximately 1-second lead over the next car by lap 2 and would cross the finish line at a solid overall 1st. Tsuboi managed to come out on top of a 3-car battle for 2nd, while 3rd place was taken by NC1 driver Moriyama.

Following the race, Umeda could not hide the joy on his face. However, he modestly stated that after analyzing the data and checking the interval best time for each lap, he should have been able to run at a solid 2’06” and therefore he still has a long way to go on achieving a consistent pace. It looks like we will have an exciting new driver to look out for at the official season opener in SUGO.

Mr Terada went on to say, “Although this was his first race, I think Umeda achieved a very composed run. I’m hoping that he will continue to pay careful attention to the basics and carry out another solid performance in the next race. I want to send a big thank you out to all those who are giving us their support.”