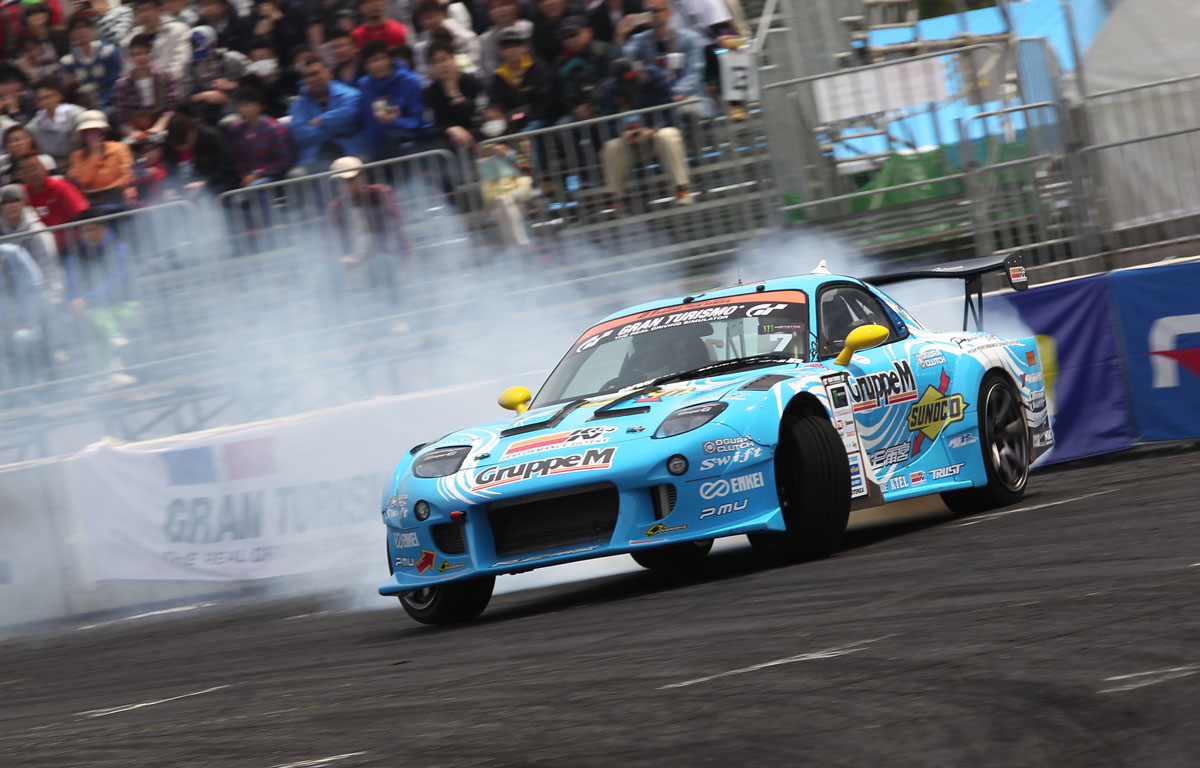 Round 1 of the 2015 D1GP was held on April 19th (Sun) at the special course established at Odaiba, Tokyo. Continuing on from last year, Team RE Amemiya GruppeM’s #7 RX-7 of Masao Suenaga and EXEDY R Magic D1 Racing’s #77 RX-7 driven by Yukio Matsui are competing in the series. The #77 “EXEDY R Magic Pink No. 6” has altered the side port specs of its engine to peripheral ports, which changes its output characteristics to a high-rotation type.

Both cars finished last season at the top of the rankings so they were able to skip the “tanso” (single run) qualifying sessions and go straight into the finals. Unfortunately, though, both drivers made mistakes diving into the corners and were unable to take leading points.

Turning to the tsuiso (chasing race) qualifying sessions, #7 Suenaga went up against the GT-R of Masato Kawabata. Taking the chase in the first run, Suenaga pulled out a stunning panel-to-panel drift but was bested by Kawabata in the second run, after he somehow managed to achieve an even closer performance. #77 Matsui went head-to-head with the Lexus GS of Takayama and despite displaying an almost equal drive, was defeated by a narrow margin through the difference in points achieved in their leading runs. Ultimately the competition was won by Kawabata’s GT-R.

Suenaga lamented, “Since I lost to the winning machine by such a narrow margin, it’s even more disappointing. I want to find where I was lacking and get onto fixing that part right away.” Matsui commented, “We changed the engine and suspension system specs and there are aspects of the car that I’m not completely in tune with. I need to get used to the car quickly and figure out the best settings.”

In the following day an exhibition match, the “D1GP ULTIMATE24” was also held, but #77 Matsui was eliminated in the first tsuiso stage. #7 Suenaga made it into the best 8 and once again went up against Kawabata. Unfortunately, however, after tenaciously chasing his opponent, he was defeated.