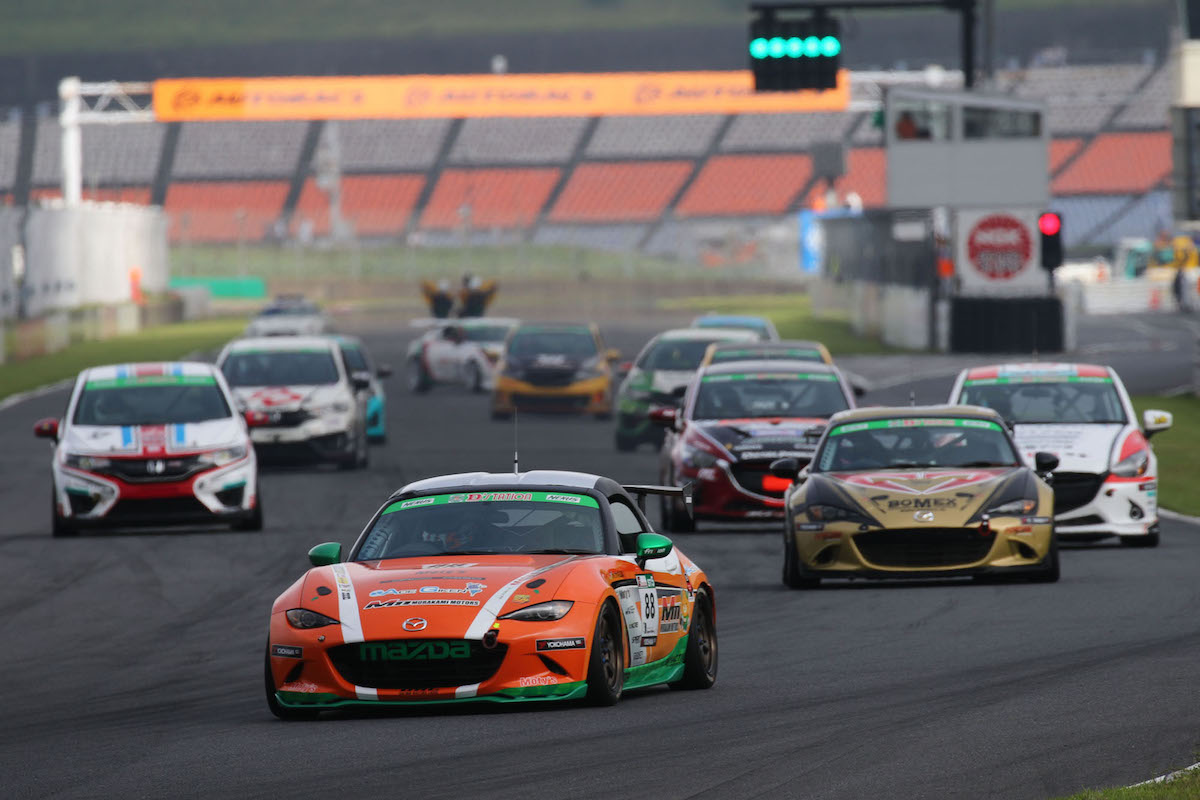 The formation for the second group began at 8:30am and the #88 Roadster driven by Murakami shot out of pole position to lead the rest of the pack with the #2 BOMEX Roadster following in 2nd and the #66 odula Demio 15MB (Riku Hashimoto / Ryuichiro Otsuka / Takayuki Takechi) in tow in 3rd. The #37 NOPRO Demio, the only car competing with a diesel engine pursued in 6th. However, the point leading Murakami Roadster would have to be careful not to overdo it due to the fact that its last two wins saw it loaded with a 35kg handicap weight. Although it would relinquish the race lead to the #2 BOMEX Roadster early on in the race, it continued to tick off laps while keeping its rival within range. The closely fought battle between the top two continued on until the midpoint of the race, with Wakitani going up against Yamashita. In the end the fight would last right until the end of the 3-hour race. The #2 BOMEX Roadster’s Tsutsui was initially separated from the #88 Murakami Roadster by about 20 seconds. However, after changing tires and handing the wheel over to their third driver, Kato, every lap saw the gap gradually shrink and the Murakami Roadster closed in. Then, with 30 minutes remaining in the race, #88 Kato finally pulled out in front of the #2 at the straight end. With an air temperature over 30°C and a road surface temperature of over 50°C, it was harsh racing conditions. However, the two cars would go on to carry out a bumper-to-bumper battle for the last 30 minutes. Kato refused to show an opening to the pursuing Tsutsui and the two passed the finish line with barely an inch between them. The ST-5 class ended with a 1-2 ND Roadster finish. 3rd place was taken by the #37 Demio SKY-D that gradually climbed up from its starting position and, with this, the podium was dominated by Mazda teams. A dramatic moment occurred at the end of the race when the #37 Demio SKY-D’s anchor driver, Ijiri, who’s drink supply failed during his stint, fell to the ground with exhaustion and possible heat stroke as soon as he got out of the car. The #66 Demio 15MB finished in 5th place. Unfortunately, the #50 LOVE DRIVE RACING Roadster (Marie Iwaoka / Hiroko Komatsu / Yumiko Sekisaki) crashed during official qualifying and was unable to compete in the final race.

Having got onto the podium in his debut year competing in the Super Taikyu series, Umeda went on to say, “Me and the whole team put in everything we had. I’m happy to get onto the podium but, to be honest, I was really hoping to be standing in the middle. The car felt really good the whole week and we were marking down good times so I think we had the potential to get to the top of the podium. I want to thank everyone in the team. The two guys in the lead were just that little bit too fast. I want to grab a win in the next round. After achieving their third consecutive lights-to-flag victory, Murakami stated, “I never dreamed we could do this. If we don’t get carried away and continue to carry out mistake free races in the following rounds we are bound to bring home a good result. In the remaining two rounds the drivers and the team are going to work together and grab that championship.”

Kato, team owner of the #54 TC CORSE Roadster (Teruaki Kato / Yui Tsutsumi) that competed in the ST-4 class told MZRacing before the race, “Autopolis is a course that is suited to the NC Roadster but we still qualified 7th. Still, we’ll be aiming for a top order finish in the race.” Then, sure enough, they battled it out in the top group throughout the race and were running in 3rd at the closing stages. However, right before the finish line, an S2000 that had been nipping at their heels managed to get passed them and snatch the podium finish out of their grasp. They ultimately finished in 4th place.

The #17 NOPRO Axela SKY-D (Tatsuya Tanikawa / Tatsuya Nogami / Toshihiko Nogami) competed in the ST-3 class, which is full of powerful opposition. Although they failed to pass through qualifying in the last round at Suzuka, they made some improvements to their car and improved their lap times. Despite the oppressive heat, they did not experience any overheating issues during round 2 at SUGO and were able to strongly complete the entire 3-hour race. Team representative Nogami (Toshihiko) related, “We were able to reduce the difference with our rivals a little today and we are already moving onto the next step. If things go well, I think we will be able to be shoulder-to-shoulder with our rivals at the next marathon round at Fuji. Keep your eyes on the Axela in the next race!”

The next round will be a 10-hour race held at Fuji Speedway. Official qualifying will be held on September 2nd and the races for all classes will be held on the 3rd. There will be a pit tour held for the Mazda cheer squad on the 2nd.