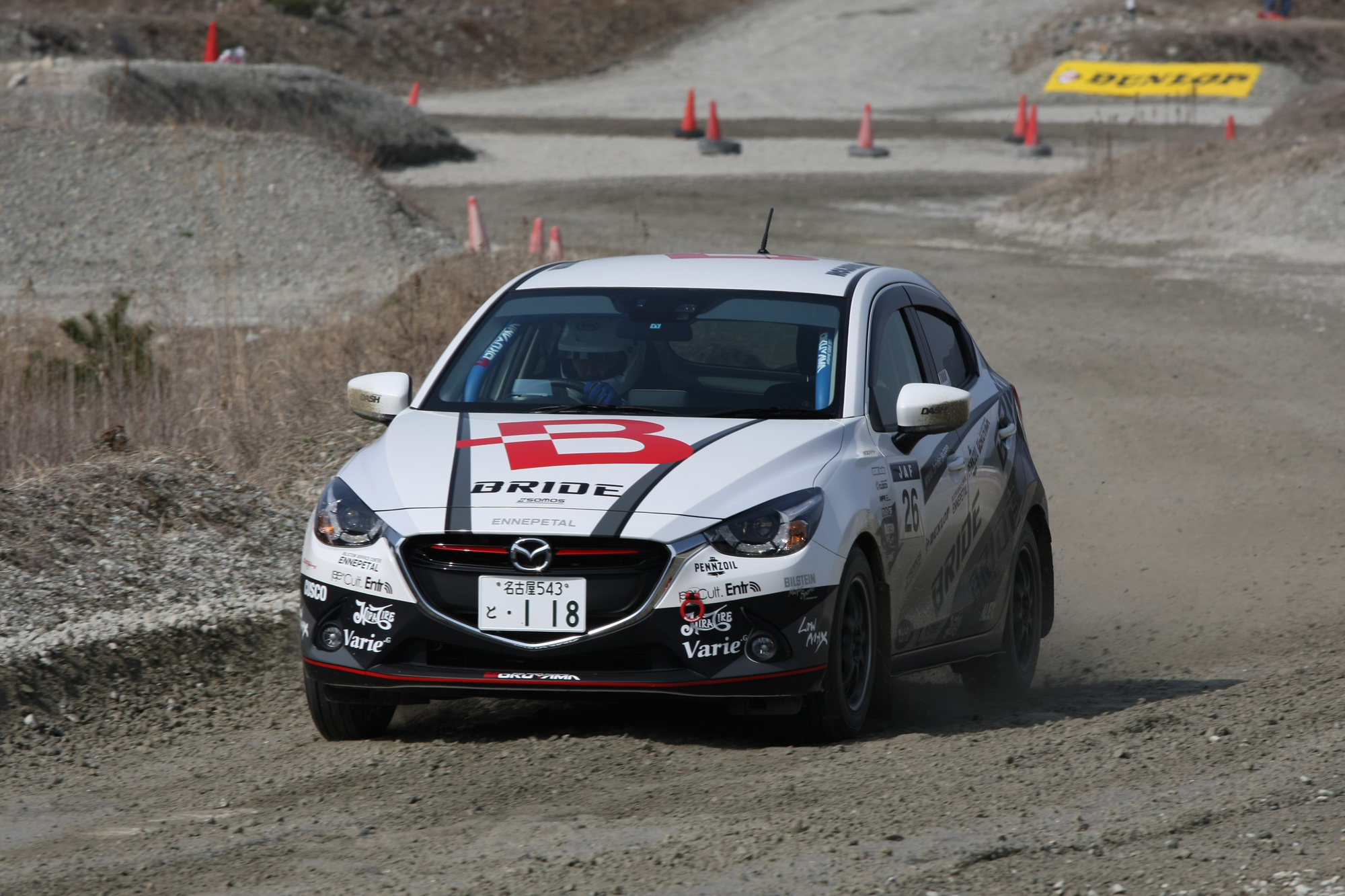 The first round of the All Japan Dirt Trial Championship was held on March 22nd at Maruwa Autoland Nasu, taking the vanguard of Japan’s major motorsports events. MZRacing’s crew was there to grab information on the new SKYACTIV-D Demio (DJ spec) which is competing in this series. We went out immediately to get the scoop.

The new Demio of #26 Haruhiko Torii and #27 Hideki Kawashima was entered in the PN2 class (for two-wheel drive vehicles of more than 1600cc – the closest to commercial spec). Following on from last year, there will be 5 DE-spec Demios competing in the PN1 class (for unmodified, two-wheel drive cars of 1600cc or less). To begin with, the competition was kicked off by a demo run carried out by PWRC world champion, Toshihiro Arai. Within the DE Demios competing in the PN1 class, #8 Hiroyuki Yamakawa attained a good placing. Many drivers took a wait-and-see approach and in the end, while many drivers opted for wet tires, those that chose to run with dry tires would ultimately record the best times. After this, the much-anticipated PN2 class began. As this was to be something of a shakedown for Torii and Kawashima, they told us as they were lining up to the start line, “We decided to preserve our dry tires and see how we go on the wet tires with a fairly restrained drive. I mean this is the first time to head out in a diesel turbo.” In the end #26 Torii finished with a 3-second difference with the lead, while #27 Kawashima ended with a 5-second difference. After the time attack, both drivers stated their impressions of the car, “While the steering characteristics are basically the same as the DE-spec Demio, it is quite difficult to get a handle on the characteristics of the diesel turbo.” Regarding the first-time power unit, Torii added, “the gear ration between second and third is pretty long, so it’s difficult to choose between changing early or half-clutching in third in order to ride the torque and prevent loss of boost.”

Following this, the second heat began in the afternoon. The time attack began from the PN1 class and, with the aim of improving their times, each car changed to dry tires to accommodate the gravel-covered course. Taking over from Yamakawa, who took the wheel for heat 1, #6 Uehara drove the DE Demio into 4th place in the PN1 class. Achieving this result up against the leading Swifts, even with them shouldering a power handicap of 100cc, demonstrates the maturation and improved competitiveness of the DE-spec Demio. Then it was time for Torii and Kawashima in the PN2. They approached the starting line with an announcement brimming with a sense of anticipation for this diesel turbo. However, #26 Torii spun out in the low-speed corners in the first half section and was unable to rewrite the top time. After him, #27 Kawashima managed to scrape over 2 seconds off the first and second half sections to improve their time by more than 4 seconds. After his run, Torii disappointedly stated, “While I was again struggling with second and third gear, I lost traction and spun out. In the second half though we were able to achieve good times and if I hadn’t spun we would have improved by about 6 seconds.” Kawashima added, “This really is a case of constant trial and error where we need to change the driving style that we’ve utilized up until now.” He went on to hint at what they need to focus on in the next race, “In the second heat, rather than go with the car’s momentum, I focused on a driving style that effectively drew out its torque characteristics. As the diesel turbo is a power unit that has never been used before, there is so much that we need to learn.”

Representative for Team Okuyama, which is taking responsibility for the development and maintenance of the machine, Tadashi Okuyama, boldly stated, “Other than the installation of safety equipment, the car is almost completely in its original state. Due to the fact that we are in a class with formidable opponents such as the 86/BRZ and the Vitz Turbo, attaining victory is no easy feat, but I feel that we really have a machine with a lot of potential. The season has only just started, so it’s from now that the competition will truly unfold.”

Introducing the MZRacing Family. This year, beginning with Kawashima and Torii’s entries into the PN2 class, all five DE spec Demios competing in the PN1 class have attached MZRacing stickers onto their machines. Stay tuned for more updates on their performance in the coming months.