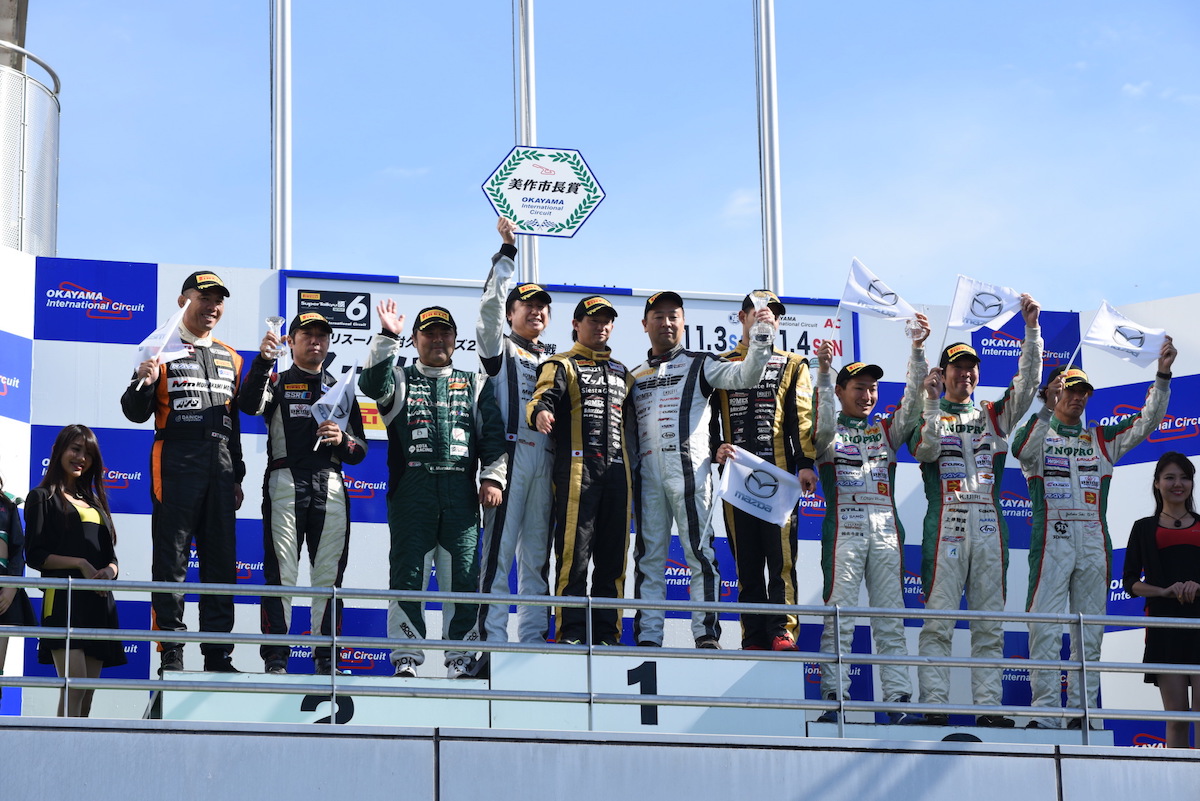 Despite being held in November, the circuit was blessed with fine weather over the weekend, and the race was held under warm conditions exceeding 20°C. In the hard-fought ST-5 class qualifying held on the previous day, the ranking top #88 Murakami Roadster secured 3rd place on the grid, while the #2 Team 221 Roadster, ranked 2nd with a 4.5-point difference, grabbed 2nd with a mere 0.1 seconds difference with the pole sitter. The #50 LOVE DRIVE RACING Roadster (Marie Iwaoka / Anna Inotsume / Sayaka Kato) grabbed 5th place in class, while the #37 NOPRO Demio SKY-D would start the race from 6th. This time the ST-5 class was transferred to the second group together with the ST-4 class, and the race would begin from 8:30am on the 4th.

Chasing pole sitter, the #11 Vitz from the opening lap, the #2 Team 221 Roadster engaged in an aggressive race right from the start. After managing to overtake the #11 in lap 16, starting driver Nishiyama began to greatly pull away from his rival in 2nd place. Meanwhile, the #88 Murakami Roadster, starting from the 6th position, was blocked by a leading car and struggled to climb up to higher rank. On the other hand, the #37 NOPRO Demio, which briefly moved into 2nd, experienced an engine stall at the closing stages of the race. Fortunately, it was able to restart, but fell to 4th place. However, a full course yellow (FCY) caution was implemented at the end of the race, and each car was forced to drive at below 50 km/h. The FCY was lifted a few minutes later, and at this point the #11 Vitz cleared the final corner and the green lights lit up before he reached the control line. The #37 Demio SKY-D did not miss this opportunity and overtook the #11 on the straight to move into 3rd. In the meantime, the #2 Roadster who had built up a large margin with the other competition, gradually began to pull away. The #88 Roadster followed in 2nd place. Taking the checkered flag on the 94th lap they secured their win. In addition, the #88 Murakami Motors Roadster ranked 2nd in the rankings, was unable to unseat the #2 Team 221 Roadster, who maintained a lead of 0.5 points in total points and took the series championship. The #88 Murakami Motors Roadster finished in 2nd place and the #37 NOPRO Demio SKY-D in the 3rd place, seeing Mazda cars occupy the top three spots of the championship, in the same order as the result of the final race. The #66 odula Demio 15 MB (Hashimoto Riku / Shimono Shigetomo / Takechi Takayuki) got 5th place, the #50 LOVE DRIVE RACING Roadster grabbed 7th, the #32 Ace Giken Roadster (Teru Nakamura / Haruhiko Sugino / Yoshitsugu Kondo) 8th, the #78 LOVE DRIVE RACING Roadster (Hiroko Komatsu / Yoshi Tsujida / Eri Okamura) finished 12th, and all Mazda cars of the ST-5 class completed the race.

Team 221 team delegate Katsuhiko Tsutsui who won the series championship and took the race win said, “I think that winning factor is teamwork, everyone did their best job and analyzed the data right from the tests. I knew the Murakami driver team would be formidable because Okayama is their home ground. In this season full of ups and downs, we won the opening round at Suzuka, then the second race, which put us on a good heading. When I had had some contact at the Fuji 24 hours, I thought that that was the end of our season. However, we won again at the Autopolis, but had some trouble at Motegi. Then coming to Okayama, we had yet to give up, and everything went well this time, especially with newly joined Uemura, who did a good job, so we were able to concentrate on strategy. We’re really happy.”

TC CORSE #54 TC CORSE Roadster (Teruaki Kato / Yui Tsutsumi / Yuya Hiraki), which is preparing for competing with an ND Roadster RF from next season, carried out its last participation in the S-Tai race with an NC Roadster entry and grabbed 4th place in qualifying. Although success in the race was expected, a trouble occurred in the driving system at the beginning. The machine was drawn into the garage where it was forced to retire. On the other hand, the ST-2 class’ #17 NOPRO Axela SKY-D (Tatsuya Tanigawa / Tatsuya Nogami), which experienced trouble in the previous round, was totally restored and competed at Okayama. Even though they started the race from a 4th place qualification, their fuel injector had issues in opening lap and it went into the pits. After replacing the part and it managed to return to the course, but later trouble occurred in the car’s sensor system. It was difficult to repair during the race and it was forced to retire.