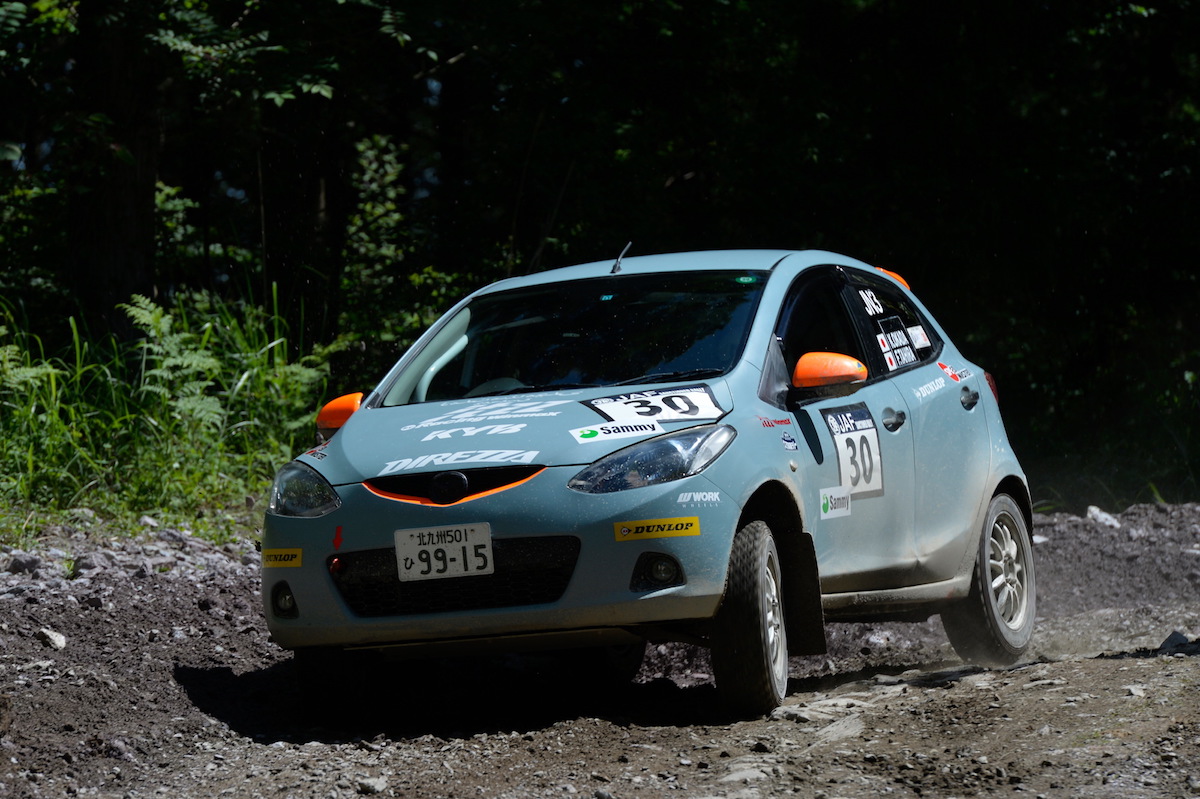 Round 4 of the All Japan Rally Championship, the “Kumakogen Rally” was held over May 19th (Sat) to 20th (Sun) around Kumakogen, Ehime Prefecture, where seven Mazda cars entered and the DE Demio of Koichi Okada / Fumio Tahira finished JN3 class 4th. They just missed out on a 3rd place podium finish by 0.2 seconds.

Okada was injured in an accident two years ago but made his return to the All Japan Rally Championship this year at round 2, the Karatsu Rally, and this marks his third rally since his comeback. The newly rebuilt DJ Demio 15MB has been modified to compete in rally and the aim has been to increase its competitiveness with each rally. However, in the previous round three, the Rally Tango, they damaged their machine through an accident during reconnaissance and they were unable to compete. Although they carried out repairs, the damage to the vehicle was too significant, and so this time around they were competing with a rental DE Demio. Okada stated, “Although this was a rapidly procured DE Demio and we weren’t able to adjust the settings, we somehow managed to make it to the start line. This year’s Kumakogen rally would be held as a gravel event for the first time in 4 years, making it the first dirt rally for me since my return. Pleading in my heart for my injured pelvis and coccyx to hold out, I headed into the start of this rally.” SS1 was held on the rough roads (gravel layered over hard rock) of Onogahara and although it was met with rain the previous night, Okada was able to record a third fastet time, 0.6 seconds behind the car running in 2nd. The next SS2 consists of a tough 2km hill-climb followed by the 9.61km downhill dirt Otana branch road. In the uphill section Okada was 5th fastest, falling quite far behind the competition. Okada related, “One of the reasons behind our slower pace were the new tires we were provided with this time. The outside diameter was too big for our DE Demio and really didn’t perform well in the climb.” The SS3 Gallery stage consisted of a tarmac hill-climb in the first half, followed by a down-hill by a ski resort that Okada attacked at full throttle, recording a 3rd fastest time.

After they completed the 30-minute service, the first day’s group 2 headed out. The first SS4 was the only rough road where the large diameter tires could be used effectively and they could attack full-throttle. However, this stage was cancelled. This resulted in every competitor being given the same time. The Otani branch road hill-climb of SS5 was difficult for the car so Okada focussed all his energy on the dirt road down-hill and in this and the next SS6, he recorded 3rd fastest times. He then finished the day sitting in 3rd with a 3.1 second difference with the cars in front. The second day consisted of the Otani reverse stage, the Yasuda stage and the group 2 Ski run loop. In the first loop, Okada reeled in the car running in 2nd, reducing the 3 second difference to 1 second. In the second loop’s SS10, he marked a time 8.5 seconds better and moved into class 2nd with a 7.5 second margin. However, in SS11, he focussed too hard on just completing the rally, recording the slowerst time and producing a difference of 22.9 seconds, seeing him falling down to 4th with a difference of 0.1 seconds. The last remaining stage was the Gallery Stage ski run. Okada stated, “Although we fought as hard as we could, ultimately another 0.1 seconds was added to the difference and we finished in 4th, 0.2 seconds behind the car in 3rd. The reason we failed was because I haven’t fully developed my competitiveness.”

The next round of the All Japan Rally Championship, round 5 in Monterey (Gunma) will be held over June 7th to 10th. This rally is carried out relatively close to the Tokyo Metropolitan area and many Mazda entries are expected. With numerous watching spots we highly recommend any Mazda fans in the area to come out and support the drivers.