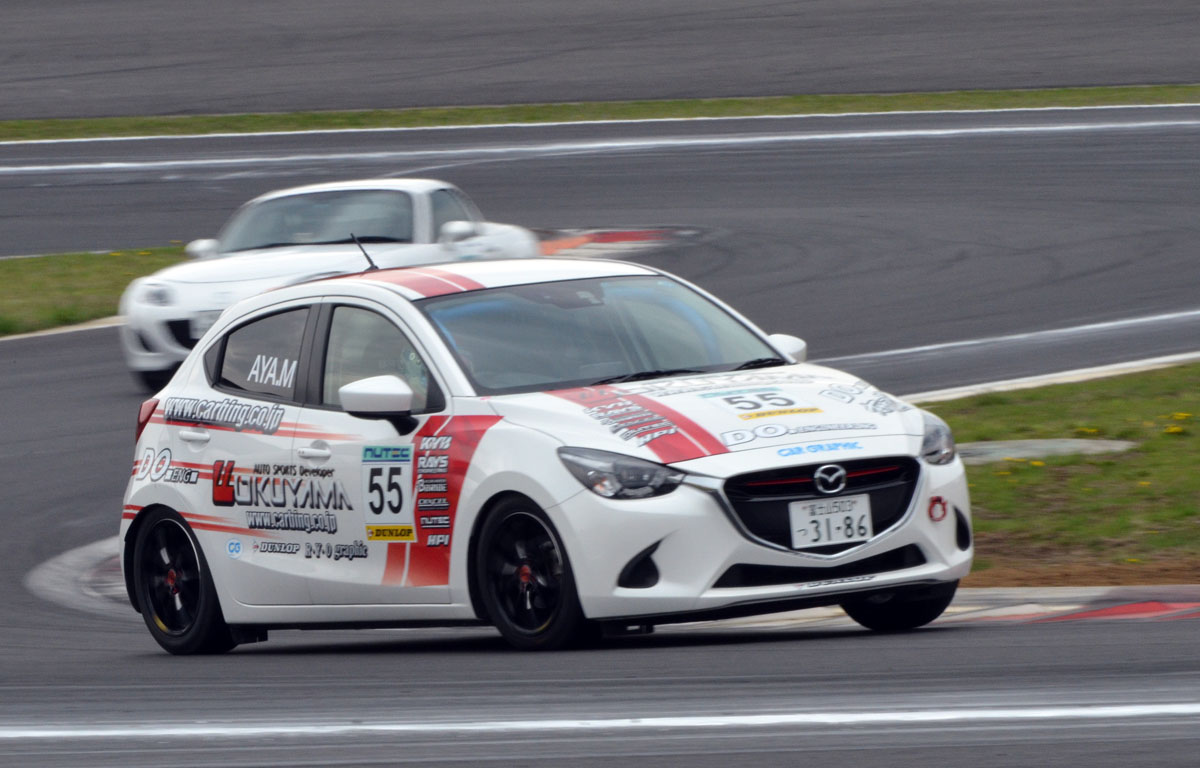 The opening round for the 2015 Fuji Champion Race Series was held over April 18th to 19th. With a total of 46 entries, including all generations of Roadster (MX-5) and old to new Demios, competing, it looks like this year will also be a race event bustling with Mazda machines. The hot topic for this year’s opening round was the entry of the registered new model Demio, which is equipped with a SKYACTIV-D diesel turbo engine, into the Demio Race.

Behind the wheel of the #55 “DO-ENG Okuyama Demio,” the subject of so much attention, was the only female driver of a Mazda vehicle, Aya Machida. Having shined in the one-make Vitz races and competed in both the Super Taikyu and 86/BRZ races, she has a distinguished career in motorsports. However, for this event, there would only be 2 practice sessions held, and the brakes that she would be using were not delivered until the day before the race, so it can’t be said that the team was fully prepared.

Despite this, Machida managed to qualify 3rd out of the 7 competitors. At the early stages of the race she was looking dangerous behind race-winner #75 Takashi Nishiyama and 2nd place #34 Takeshi Tokiwa. At the midpoint she began to fall a little behind the top 2, but still managed to finish in 3rd place. After being asked to give her impression of the Demio in its first race, Machida stated, “The acceleration is powerful up to second gear. I want to perfect the settings for the next round.” It seems that she felt some real potential in the car.

Race winner Nishiyama welcomed the new challenger commenting, “The new diesel turbo seems to have some torque so seems like it will be a force to be reckoned with. It looks like this year is going to be a very fun series.” 2nd placing Tokiwa positively stated, “When I finally caught up with Nishiyama, Aya was right behind me. Still, I will be aiming to win in the next round.” Until the first half of last year the Demio race has been dominated by Nishiyama, but from this year it looks like things are going to be really competitive. Things are definitely about to heat up.

On April 19th (Sun), the qualification sessions and races for all series, including the aforementioned Demio and Roadster Cup (raced with registered machines), were held. The first race was a combined race for the Roadster Cup NA and NB. In the NA6 class, #23 Minoru Yamakawa and #7 Fumiaki Motegi carried out a back and forth battle, where the two would overtake and be overtaken by each other numerous times, but ultimately Yamakawa met with engine trouble. Motegi took home his first victory since round 2 last year, while 3rd place went to #4 Tadashi Irie. In the NB8 class #11 Yuichi took victory, with #91 Makoto Kamiya and #78 Kiyoto Akaishizawa coming 2nd and 3rd respectively. In the NA8 class, #88 Kensuke Yamada snatched pole and recorded an overall top time of 2 minutes 6.811 seconds. However, in the race he would place 2nd, with NA8 class ultimately finishing with Yamagata 1st, Yamada 2nd and Ohara 3rd.

The second race for Sunday was a mixed race of cars such as the Demio, then both the NC Roadster Open and Challenge classes were held. In the open class, which allows for a wide range of modification, a fierce battle unfolded between last year’s champion #64 Atsushi Shibamoto and #8 Satoshi Kikuchi, who took a hiatus from competition last season. In the final race, Kikuchi was running in the lead for a time, but Shibamoto was the one who passed the checkered flag in 1st. In 3rd place was #16 Mamoru Yokohama. The Challenge class, which strictly restricts modifications, saw the long awaited first victory of #18 Ranman. #70 Toshiaki Utsumi placed 2nd and #22 Koji Nakagiri finished in 3rd putting all 3 participants up onto the podium.

Round 2 of the Fuji Champion Race Series is scheduled to occur on the weekend of May 16th-17th. However, both NC classes of the Roadster Cup, the Demio Race and so on, are scheduled to continue from Round 3. For details on the races you are most interested in please refer to the homepage. We highly recommend you make a trip down to this circuit, which boasts a superb view of one of the world’s most renowned world heritage sites.