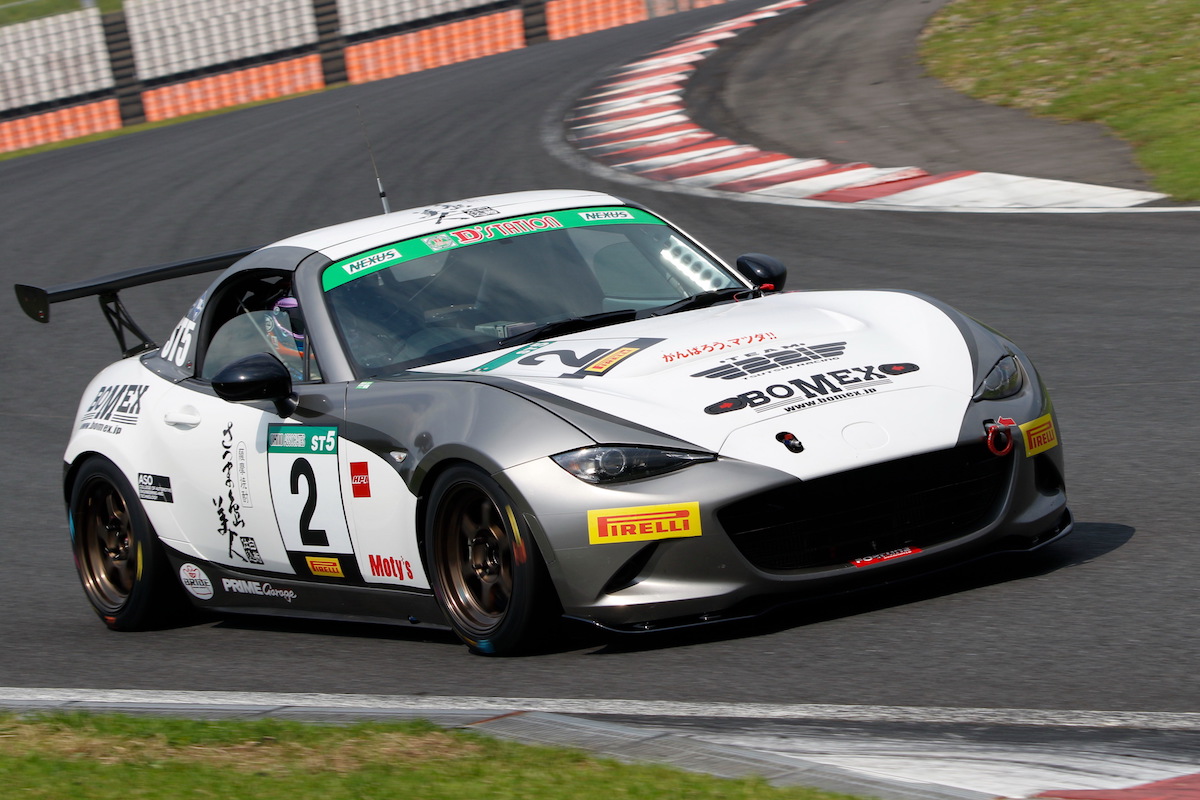 Round 4 of the Super Taikyu (S-Tai) series was held on July 15th (Sun) at Autopolis, Nita, Oita, where the Team 221 Roadster (Katsuhiko Tsutsui / Kōji Yamanishi / Tanaka Katsuki) passed the checkered flag at the top of the ST-5 class to take their second class victory of the season. Along with that, the NOPRO Axela SKY-D (Tatsuya Tanigawa / Tatsuya Nogami / Toshihiko Nogami) finished in 2nd in the ST-2 class to achieve its third consecutive podium finish this year.

The 5-hour race began at 11:35am with a formation lap and after the lap was completed all 50-cars launched into racing speed and headed for the first corner. In the ST-5 class the #2 Roadster had secured pole position in qualifying and thus began in the lead but Otani in the #37 Roadster pulled out a strong starting dash to snatch the top spot. However, the #2 Roadster driven by Yamanishi had faster pace on the straight and was able to retake its position and tick of laps in the opening stages while holding onto its position as race leader. The all-female driver team, the #50 Roadster, having secured its highest qualifying position of 3rd place, was hit from behind from a higher class machine at jet coaster straight and went off course. With this they got stuck in the gravel and fell down several positions.  The #88 Roadster, which took class victory in the previous round, the 24 Hours of Fuji, saw its ace, Yoshida, take the wheel for the start of the race. He began from a 7th place qualification and aimed to climb back up through the ranks. After passing the #50 Roadster, it joined the fight for the top spot with the #2 Roadster and #69 Fit. As for the #37 Demio, in the opening stages it suffered an oil leak in its transmission, which caused it to lose a lot of time in the pits and fall out of the fight for victory. Tsutsumi was behind the wheel of the #54 Roadster for the start of the race and, beginning from 4th on the grid, was hot on the heels of the car running in 3rd and keeping his eyes peels for an opportunity to open up. Towards the end of the race he moved up to 3rd place and seemed like he would remain in that position until the finish line but 30-minutes before the race ended he experienced power steering trouble. The team took the car into the garage and attempted to make repairs but it was determined that the problem could not be solved in a short amount of time and so they were forced to retire. The #17 Axela saw Tanigawa act as starting driver and later had the wheel over to Tatsuya Nogami who pulled out a tenacious drive, solidly ticking off laps. After this, the two lancers that had taken the top positions in qualifying began to display mechanical problems and they went into the garage where they ultimately ended up, lifting him one position to class 2nd. Toshihiko Nogami took the wheel for the final short stint and passed the checkered flag in 2nd.

After a close quarters battle that unfolded between the #2 Roadster, the #88 Roadster and the #69 Fit right up until the end of the race, the #2 managed to break away, with the #88 following in behind making the top two steps of the podium being taken by the Mazdas. After taking their second victory of the season Team 221’s representative, Katsuhiko Tsutsui stated, “With the 2018 Japan floods causing a great deal of trouble to Mazda we wanted to repay the debt we owe to the Roadster that allows us to enjoy racing. I’m really happy we could carry out a good race.” Yamanishi stated, “Autopolis is good for the Roadster. There are a lot of locations where you have to turn the steering wheel to the max and you can really take advantage of the car’s handling. We dropped out of this race last year and so I’m glad we were able to wipe away that result today.” After passing the checkered flag in 2nd, Murakami Motors’ Murakami related, “It’s disappointing that we weren’t able to grab a consecutive victory but we were able to climb back up to 2nd from a 7th place start with some tenacious driving. Thanks to all those who came out to support.” With victory in the last round and a 2nd place finish this round, the Murakami Motors team is maintaining its lead in the class rankings, while Team 221 has closed the gap with its second season win and extra points attained through its pole position qualification. All eyes will be on these two teams as they battle for the championship for the remaining two races. As for the #66 Demio, which began from 5th on the grid, it finished the race in 5th. The #50 Roadster passed the checkered flag in 8th and the #37 Demio that suffered a transmission oil leak finished in 9th.