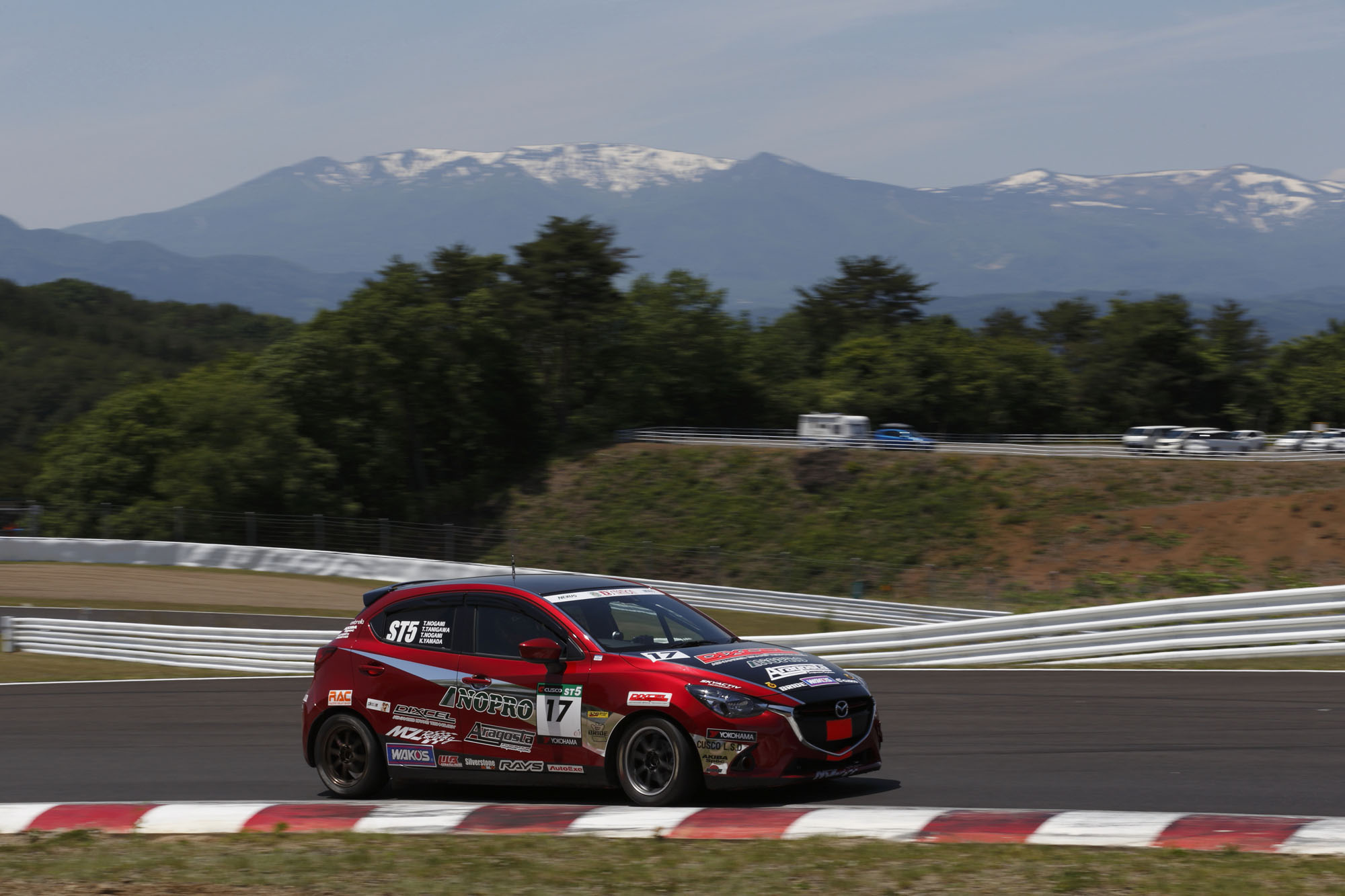 On May 24th (Sun) round 2 of the Super Taikyu Series 2015 was held at Sportsland SUGO, where Team NOPRO’s Demio SKYACTIV-D, which only just made its debut at the opening round, improved its competitiveness and achieved a 4th place finish.

Since its debut, the NOPRO Demio SKY-D has gained some solid performance through running in events such as the Mazda Fan Tohoku Meeting and driving in tests at Fuji Speedway. In this rounds qualification, it reduced the difference between the top machines to approximately 4 seconds, which, if compared to the over 10 second difference seen in the opening round, clearly demonstrates the car has picked up its pace. That being said, it still started from class 7th at the tail end of the pack. The starting driver was team representative Toshihiko Nogami, who went with a daring strategy of immediately pitting after the race began. Immediately doing away with one of the two compulsory pit stops, this surprise strategy intended to take advantage of the Demio’s superior fuel economy and only carry out one real stop during the race. As expected, soon after he changed to Tatsuya Tanigawa, the Safety Car (SC) was dispatched and the distance between them and their rivals in front was immediately reduced to zero. After this, Tanigawa implemented a long stint of 1 hour and 45 minutes, while keeping his mind on preserving the tires, raised them up to 6th place, and then handed the car over to Tatsuya Nogami.

At this point they refueled a small amount, changed the front tires only, and the returned the car to the course. Tatsuya Nogami continued his stint at a stable pace equivalent to that of Tanigawa, and within this hectic race, which saw as many as three dispatches of the SC and their gasoline rivals pitting over three times, the Demio SKY-D gradually climbed through the ranks and was almost within reach of a podium finish when it crossed the finish line in 4th. It can be said that the strategy of the team to take full advantage of the Demio diesel’s fuel efficiency was exceedingly effective.

On the other had, the fortunes of the two Roadsters that competed in the ST4 can be divided clearly into good and bad. The “TC CORSE NC Roadster” began from 14th on the grid and carried out a mistake-free, solid run that took advantage of the timing of the SC and saw them jump up to 5th place to finish with their first points of the season. As for the Murakami Motors NC Roadster, it began the race from a 12th place qualification. With an individual driver marking an 8th placing time, the speed of the roadster was on full display. Within the race as well it was making fine progress towards taking a top spot, but at the closing stages made contact with a vehicle from the same class that spun out and this unfortunately forced a retirement.

Round 3 of the Super Taikyu will be held on July 5th (Sun) at Fuji Speedway. This will also be the series’ longest race at 8 hours in duration. It is sure to be eventful. We highly recommend anyone living close to the Kanto or Tokai areas to come down and check it out.