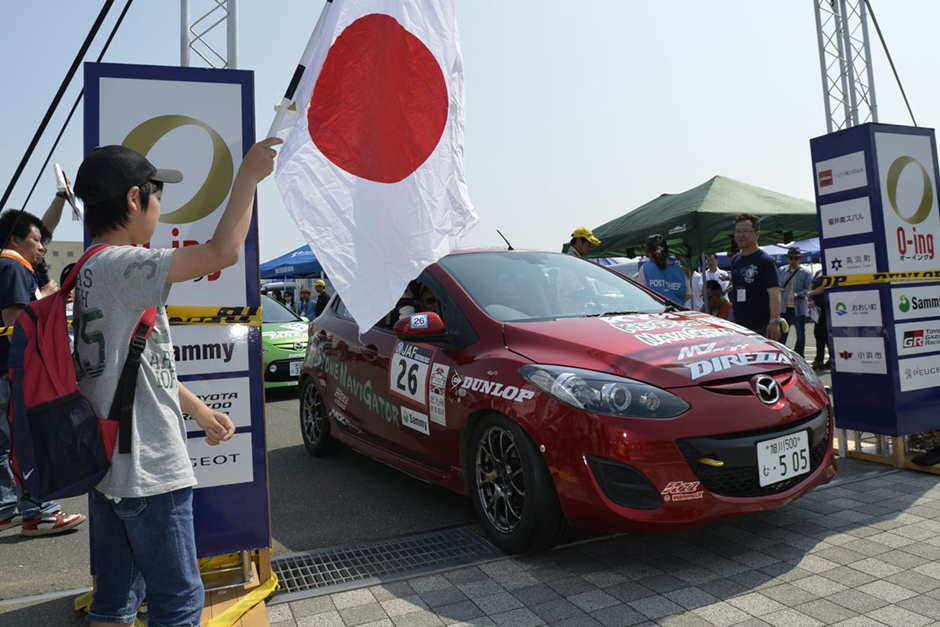 Round 3 of the All Japan Rally, the “Wakasa Rally” was held in Ōi, Fukui Prefecture, where Koichi Okada / Soichiro Kanno competed in their DE Demio to take JN3 class 2nd. On top of that, in the JN1 class, which has a restricted allowance for modifications, Takaya Azuma /Tsuyoshi Kajiyama also propelled their own DE Demio to a 2nd place finish.

Ōi, Fukui Prefecture faces the See of Japan and compromises the so called “Jakusei” ria, located in the westernmost tip of the Hokuriku region, and follows along to Wakasa Bay and continues onto the Tamba Mountains. The rally moves through some truly scenic areas that include the striking blues of Wakasa Bay contrasted with the fabulous greens of the mountains that captivate not only the spectators but the participants themselves. Due to unforeseen circumstances this Wakasa Rally would deviate from the usual high-speed section, the “Rainbow Line” toll road, and only be held on the forest roads. These narrow forest roads consist of harsh undulations with narrow bridges, large gratings, uneven and wet road surfaces scattered throughout, making it a demanding course for both the drivers and the machines. With long stages set from day 1, tire management throughout sections 1 and 2 became crucial for the latter stages of the rally. How competitors juggled their allotted 8 tires would significantly impact the final result.

Okada passed through the uneven SS1 without issue and steadily drove through the uphill section without losing any pace. He then moved things up a gear and displayed some truly bold cornering in the downhill section. Although Okada finished the stage feeling satisfied with his performance, his content turned to dismay when he looked at the aggregate times. Amano’s Vitz had hammered out an almost 20-second faster time. Okada went on to say, “I went flat out right from the beginning. Although I took some safety margins in the middle where the road surface was wet or rough, I can’t believe it was 20 seconds worth. I honestly thought I was running right on his tail, but rather a massive distance has opened up between us.” After placing a 5th fastest time in SS2, he changed tack and fervently attacked SS3 and 4 but ultimately was 2nd fastest. At the end of day 1, Amano was in the lead with his Vitz and Okada was 1 minute 27 seconds behind in 2nd. Moreover, the Shimada Demio was closing in from behind with only a 10.9 second difference.

Okada commented, “It looks like it’s going to be a three-way battle with the Shimada Demio and Washio’s RX-8. Shimada is real fast out of the blocks and Washio is a veteran who is really progressing with the development of that RX-8. They’re both pretty formidable.”

The experienced Washio pulled out a starting spurt early in Day 2. He immediately reduced the 28 second difference with Okada to 11 seconds and passed the Shimada Demio to be running in 3rd. Okada spiritedly charged SS12 when the final section (that includes the service area) began but Washio’s RX-8 was still 1.1 seconds faster and his margin was further reduced to 9.9 seconds. Knowing that he could not lose another SS, Okada was intensely focused when beginning SS13. As usual he was steady in the uphill and daring in the downhill and ultimately recorded a time 5.7 seconds faster than the Washio RX-8.

Brimming with fighting spirit Okada related, “I’m really relieved I was able to shake off Washio’s pursuit and grab 2nd. Not only Washio, but all the other drivers are getting faster and are perfecting their machines, you can’t let your guard down even for a second. From next round the rallies will be gravel, where I feel very confident, so I am determined to grab victory and follow that up with clinching the series title.”