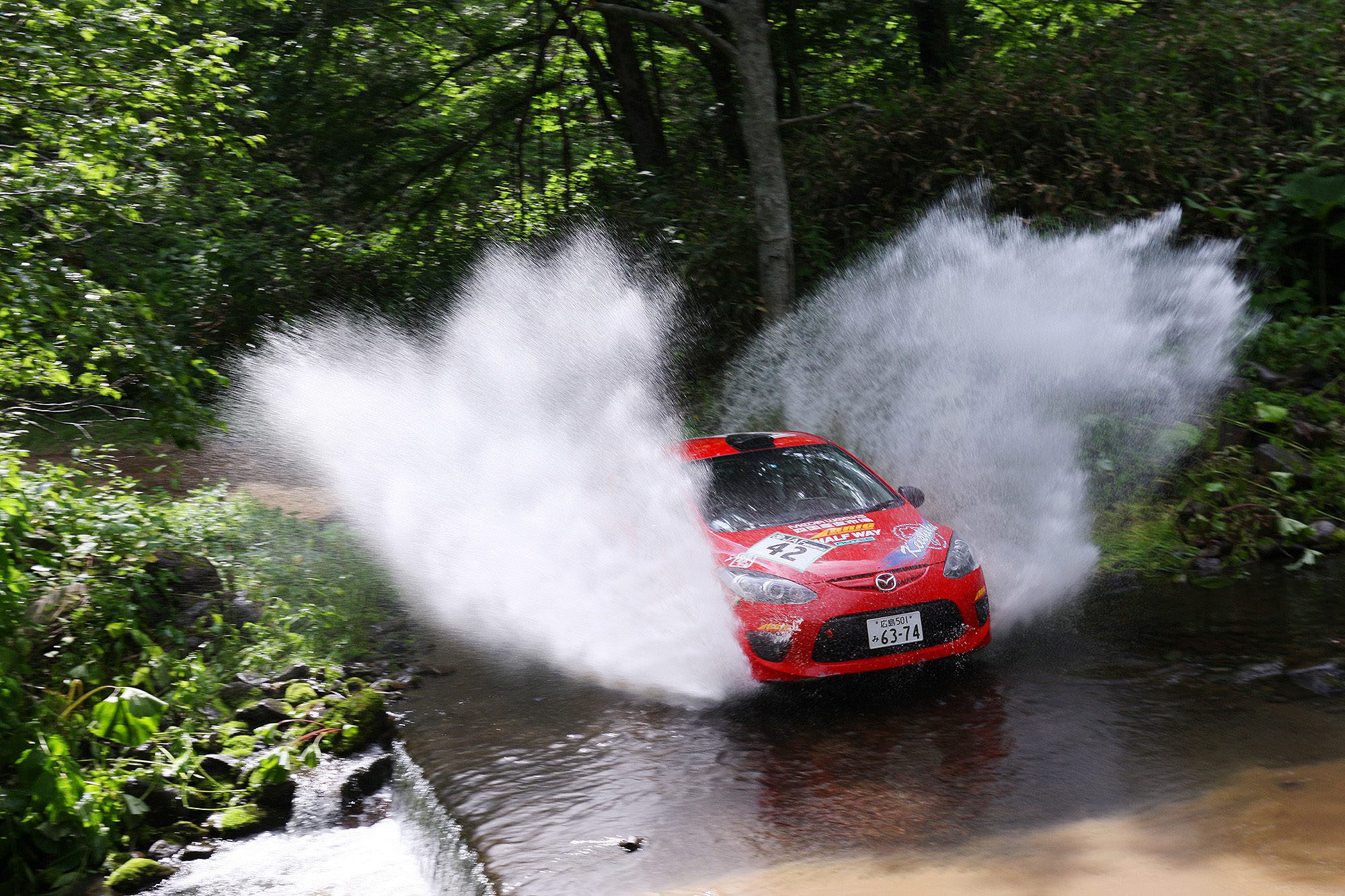 Round 4 of the All Japan Rally Championship, the ARK Rally Toya was held in the areas around Toyako, Hokkaido over July 3rd to 5th where the Mazda Demio of Terakawa Kazuhiro and Miyoko Ishikawa grabbed victory in the JN3 class. In the JN3 class, 7 of the competing cars are Demios, so this saw the Mazdas occupying places 1 through 4.

The man who took the class win, Mr Terakawa, is well known for working as a driving instructor for Mazda employees at the Miyoshi Proving Ground in Hiroshima Prefecture and is also acting as a teacher for the Women in Motorsport project (MWIM). We’ve received some notes from Mr Terakawa regarding the rally so we’ll pass them on here.

“At the Rally Toya last year, I was one step away from victory when I unfortunately went off track at the final SS and was forced to retire. This year, more than thinking of the final result, I was focusing on guaranteeing I would complete the entire rally. SS1 was the SSS Volcano. During reconnaissance here, we noticed that the road surface was beginning to get a little rough, so in order to preserve the car we drove a little conservatively. In this short 700m SS we ended up finishing in the lead with 0.8 seconds difference over the next rival. Day 1 included 2 loops of three forest roads, which included the one where I retired last year. Driving with an intense focus on “just finishing,” I carried out this portion trying to not overdo it, but after we completed SS2 I checked the times and was surprised to find I’d built up a 20 second difference over the car in 2nd to still be on top. This gave me a huge boost of confidence in my own driving style. After that I continued to drive at my own pace, without pushing the limits, and the second group to the rear began to drop their pace slightly so I was able to continue in a comfortable position. As a result, at the end of Day 1, I had built up a close to 50 second difference over the other competition and would be heading into the second half with a decent lead. In Day 2, although I had a comfortable margin to work with, I still wanted to push a little in the first two runs to try and grab some day points. For the last 2 I decided to drive at an easy pace and ensure that I would finish. In the end, in the first 2, I successfully built up a 20 second margin over the competition, but in the last 2 I began to really feel the pressure and my body wouldn’t respond quite like I wanted it to. Even though I was trying to drive conservatively, a few times it looked like I might go off course and I was a little relieved I managed to complete all SSs. I’ve finally been able to attain my long desired first All Japan Rally victory. I really just want to send a huge thank you out to all those who support us, those who cheer us on, and most importantly, everyone in our team. We’ll do our best in the next round at Fukushima.”

Incidentally Mr Terakawa is now a happy newlywed, and the joy of both these events was clearly written across his face. Coming in 2nd in the JN3 class was MZRacing family member, and currently ranked no. 1, Koichi Okada, in 3rd was MSports’ Yukihiro Fujita and in 4th was Kentaro Takano, making it a 1-4 finish for the Demio. As for Ito Rina, who took 3rd in last round’s Wakasa Rally, unfortunately she went off course in SS4 on Day 1 and was forced to withdraw. The next round, the MSCC Gambaro Fukushima Rally (80% gravel) will be held over July 25th to 26th in Tanagura, Fukushima.