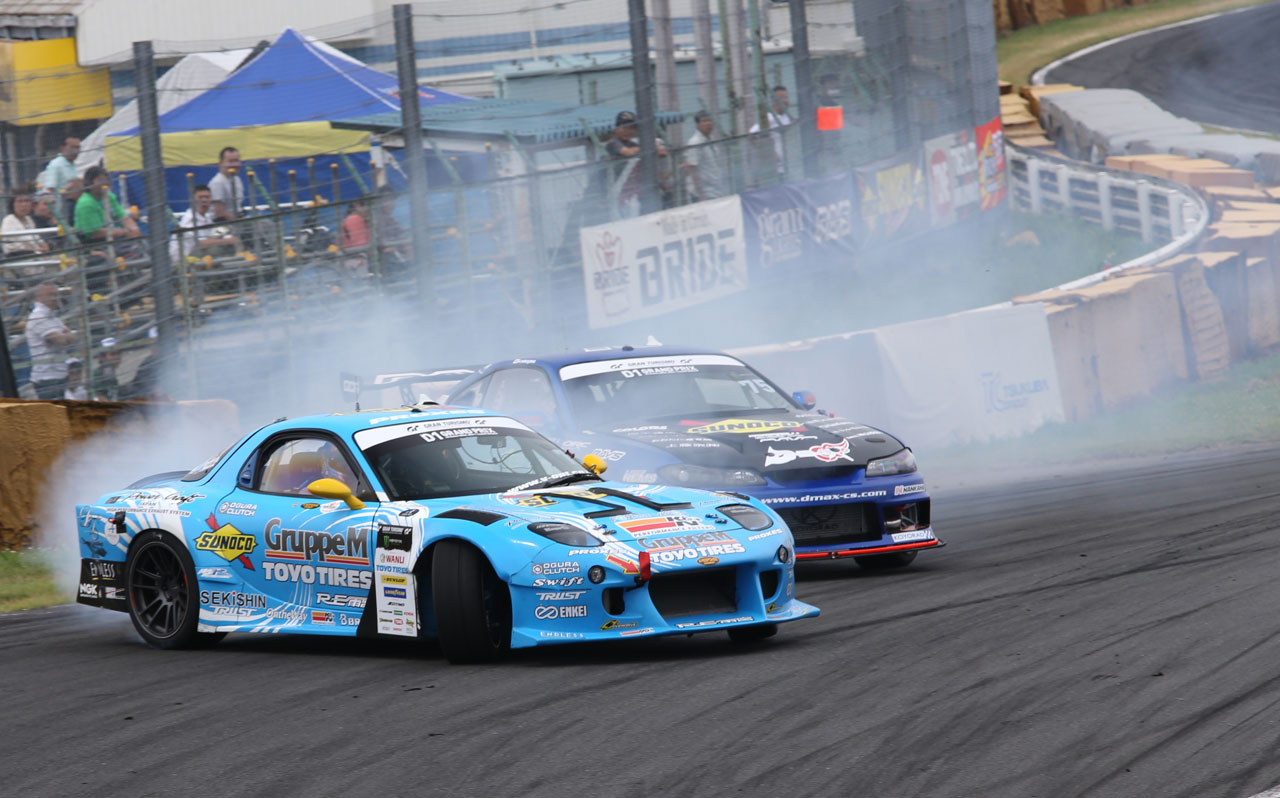 Round 3 of the D1GP was held over June 24th to 25th at Tsukuba Circuit, Ibaraki Prefecture where amongst the four Mazda cars that took part, the #7 GruppeM RX-7 (Yukio Matsui) advanced into the tuiso (chase) tournament but unfortunately was eliminated in the best 16. He ultimately finished in 10th place. With the FIA (Fédération Internationale de l’Automobile) announcing that it will be holding an international drift competition, the “FIA International drifting Cup 2017” in Tokyo’s Odaiba over September 30th to October 1st, this Japanese born drift competition has been garnering a lot of attention from around the world.

The #88 TCP MAGIC FC RX-7 of Manabu Fujinaka finished 33rd and the #21 SAMURAI KANTO TOYO TIRES RX-7 (FD) of Takashiro Imamura 35th to be eliminated in qualifying. Fujinaka went on to relate, “My gear ratio wasn’t suited to the conditions so I couldn’t get the car up to speed. As for Imamura, he felt some problems with his engine firing and stated, “I was only able to drift in the main event. Until then I wasn’t able to do any real prep so I couldn’t really hope for a good result. I didn’t have my settings dialed in enough before I came.”

The RE turbo engine mounted #77 EXEDY R Magic D1 Racing Roadster of Teruyoshi Iwai passed through qualifying in 6th place but in the tanso (single run) finals he was not able to score enough points to avoid elimination. “I’m still not completely sure myself why I wasn’t able to grab enough points in my first run. In my second run I easing off the accelerator to turn back but that wasn’t getting me any points so I pushed the load into the car’s ass and tried a bunch of things to get the car to turn and maybe over did it. It wasn’t my best run I have to say. The team did a really good job getting the car’s settings locked in and if I had driven better we could have made it to the final… To be in such a good position and then to ruin it with a poor drive, I’m really sorry to everyone.”

Driving in the #7 Team RE Amemiya GruppeM RX – 7, Matsuya passed through the tanso in 4th place and advanced to the tsuiso tournament. However, going up against Akira Hirajima (S15 Silvia) in the Best 16, he wasn’t able to match the pace and was eliminated. His final placing was 10th. He later commented, “My drifting style was different to Hirajima and I wasn’t able to match him. I really need to work on my ability to predict a variety of different patterns.”