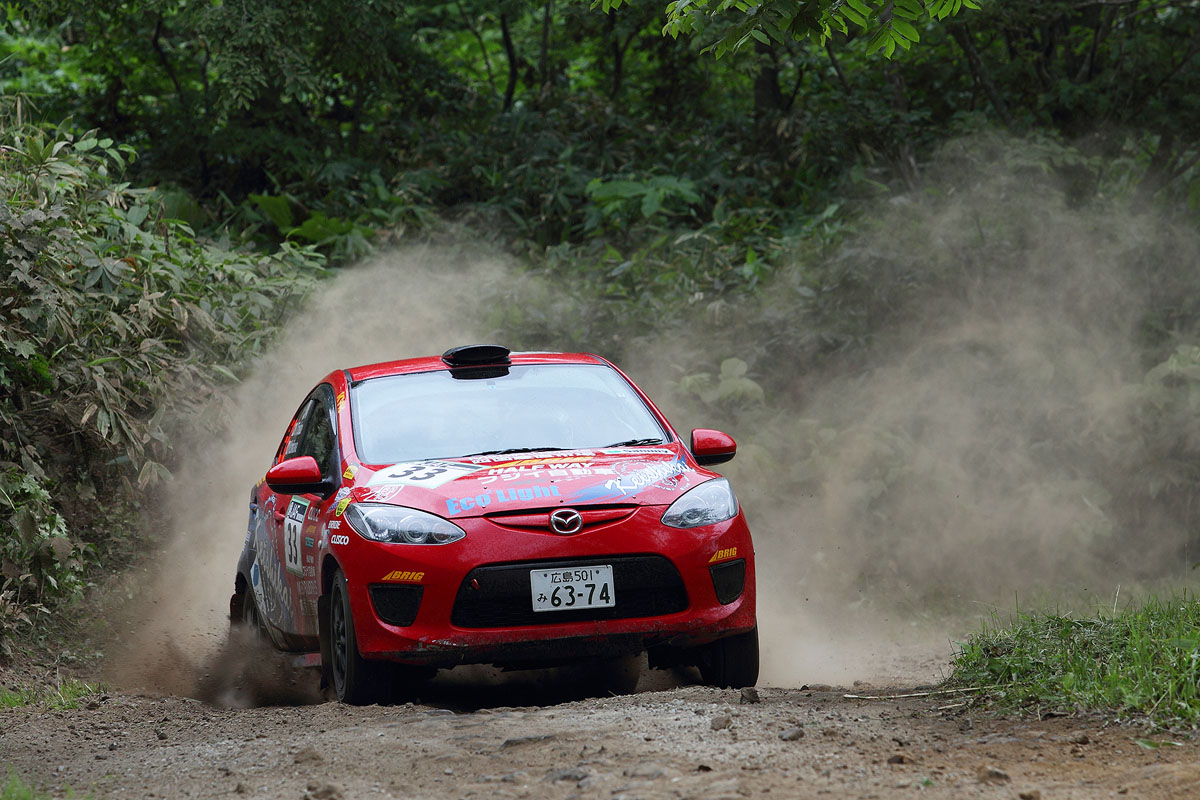 Round 5 of the All Japan Rally was held over July 1st (Fri) to 3rd (Sun) in the surrounds of Hokkaido’s Lake Toya where out of the 7 JN3 class competitors, 4 were Demios and 2 were RX-8s. In this Mazda dominated class the Demio of spot driver Kazuhiro Terakawa/Miyoko Ishikawa finished in 2nd place. In the modification restricted JN1 class the Demio 15MB driven by Hisashi Matsubara/Zenmei Wada also placed 2nd.

On a rainy Day 1 2015’s JN3 class champions, Koichi Okada/Soichiro Kanno crashed their Demio into a tree on the side of the course, injuring the drivers and forcing a retirement. We sincerely hope hat Okada makes a swift recovery. As for Terakawa, who led the pack of Demios, he sent us this first hand report.

“Aiming to accomplish a consecutive victory following on from last year, I had my eyes set on overthrowing Tenno. I felt that the competition would be decided on the extended “Lavender Long” stage, so I pushed as hard as I could there. In the end I was 2nd fastest by 2 seconds in the first run and then just 1 second in the next. Regardless of distance I was constantly within 1-2 seconds of him and I knew that if I could just avoid making any large errors I had more than a fighting chance at victory. So I composedly pushed my machine and maintained pressure on Tenno. Then in SS6, I somehow made it through the new “Course Baron,” which was made incredibly slippery by the rain, and managed to take the lead. I headed into Day 2 with all those around me giving me positive pressure and saying, “You better win!” The deciding factor for this day would be the “Scallop” stage, a mixed paved and unpaved section, which I’m not so strong on. I concentrated my hardest on keeping my lost time down to a minimum and actually managed to record the stage best. However, after riding on this momentum into the fateful SS10, I made a fatal mistake at the Toya’s famed river crossing. I recklessly dove into the river, overflowing due to the rain, lost engine power and caused serious damage to my front radiator. I was in a situation where I might not even be able to complete the rally but due to the rapid assistance of the “Shikoku Sanchoku Ichiba” Rally Team, I was able to finish in 2nd. It’s disappointing that I wasn’t able to take victory and I want to apologise to the whole team and the fans but I’m confident that I gave it my all and will put my heart and soul into the next round.”

The JN1 class’ Hisashi Matsubara stated, “On Day 1 I suffered from some unexplainable trouble where my engine failed to start and I wasn’t able to mark a time which dropped me down to class 4th. After regrouping for Day 2, I was able to mark the best time in SS9 and regain some composure. The next SS10 was cancelled but I still managed to record the fastest times in 5 of Day 2’s 6 SSs, rubbing a little salt in the wound of Day 1’s misfortune. However, I feel that I effectively demonstrated the speed of the Demio 15MB. The next time I compete will be in round 7 at Rally Hokkaido. The setup of our machine is perfect so I will be aiming for my 3rd All Japan Rally victory.”