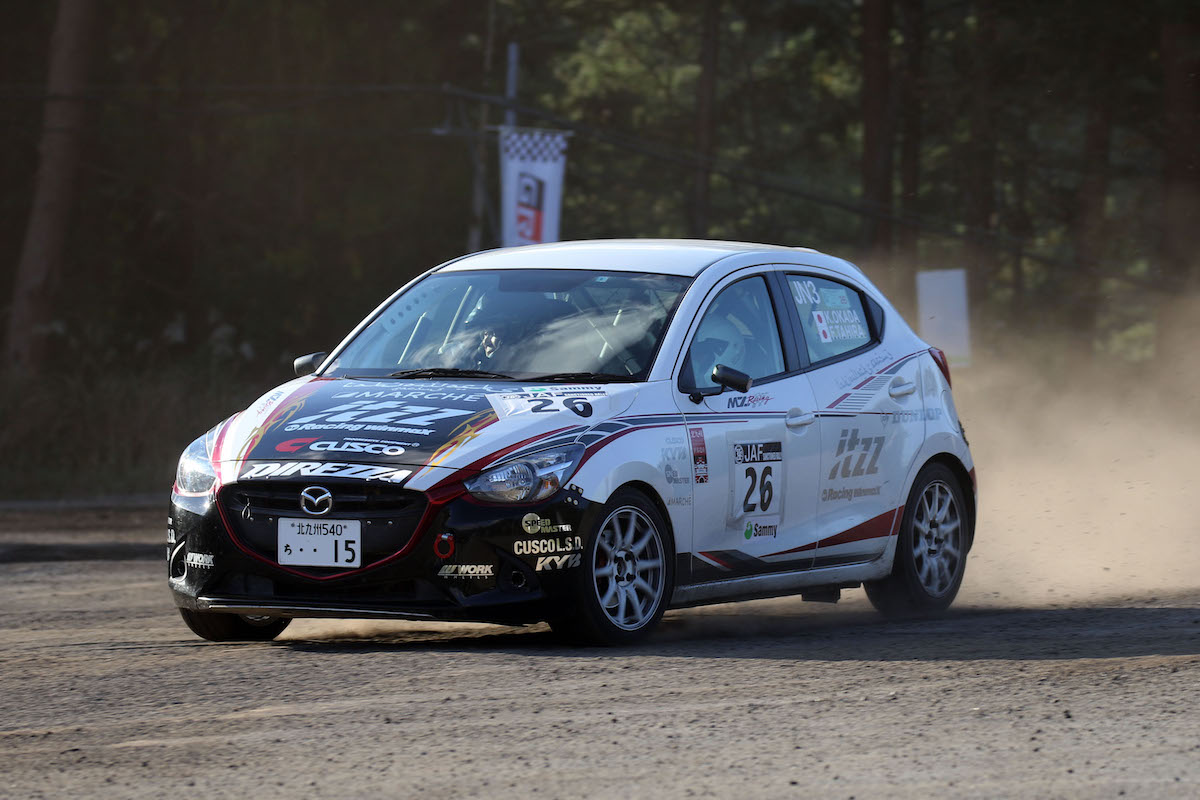 The “Rally Highland Masters,” marks the 46th tarmac rally to run around the mountains and service park located in the Montdeus Hida-Kuraiyama Mountain ski resort on the outskirts of Hida, Takayama city. A gallery stage was set up at the Alcopia ski area parking garage about 5 minutes from the service park, with 12 SS making up a total 87km and, including liaison, the total mileage was about 340km. Each SS was a meandering medium and high speed course, with tracks of a narrow width and many locations had a slippery road surface covered with moss and fallen leaves. On Friday the reconnaissance (course test run) was held on wet conditions, and on Saturday and Sunday, where the competition took place, it was dry for two days, but in the shade and morning stages the wet road surface also remained and created difficult conditions.

Here is Okada’s own report. “the first stage of Leg 1 was the Aoya hill climb SS1 (8.90km) and Yukichi downhill SS2 (6.37km). SS1 had tight corners in the uphill and was on a slippery wet road surface due to fallen leaves. Our gear ratio setting didn’t match this stage and it was a difficult start for the DJ Demio. In the following SS2, it was a downhill stage where wet patches remained in some places. There was trouble with our newly adopted brake system, and I was struggling to respond. When moving through the 50km SS3 Musugo River (6.16 km), the first half of the SS was dry, the second half was a bit slippery in the dark forest. The finish point was a 180 degree turn where were a lot of galleries, and I made a mistake there but achieved a good time at the end. After the lunch break and service, the following three stages repeated section 1. Since the road surface had dried up I managed to improve my times and finish the first leg in class 3rd.

Leg 2 was forecast to see rain, but it turned out to be sunny. However, the street road was slippery because of the rain that fell at midnight. First of all, at the SS7 Ushiki downhill (6.33 km), I managed to get through the slippery road surface. The uphill (9.70 km) Atagasu SS8 became a difficult stage that didn’t match the Demio’s gear ratio. Here we fell behind 24 seconds. SS9 was a reverse run of SS3 Arkopia (6.18 km), a slippery stage covered in moss. After the service, we repeated the 3 stages of the morning. Then, in Leg 2, the second loop had a dry road surface, but time was up. I finished 3rd, but this time I was able to test the suspension, the new tires and brakes, which was great. The DJ Demio is definitely becoming faster, so please look forward to the next race and next year.