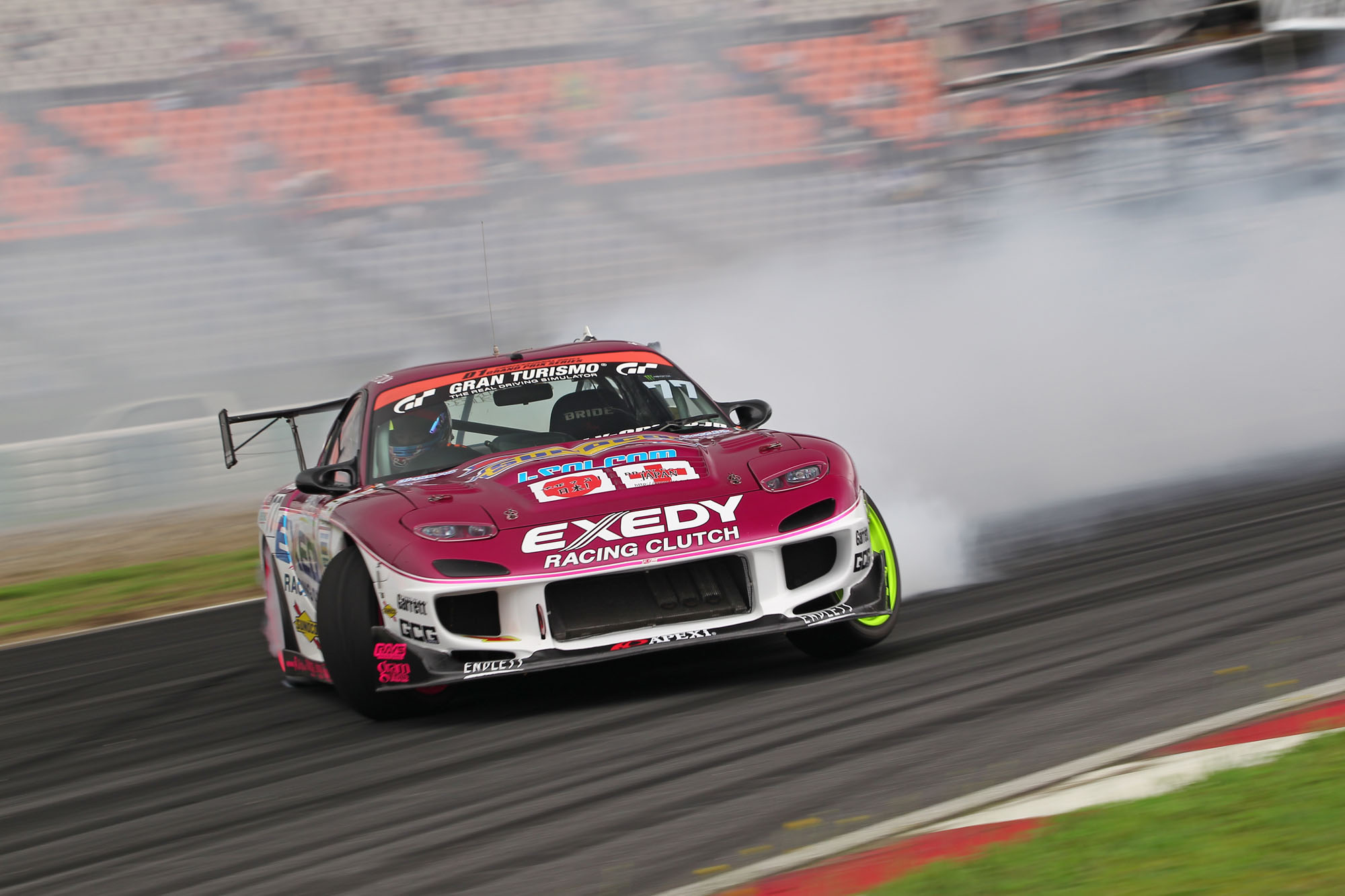 Over July 26th-27th the 3rd round of the D1GP was held at Autopolis in Hita, Oita Prefecture where the #77 EXEDY R Magic D1 Racing of Yukio Matsui defeated the powerhouse RE Amemiya to take 3rd place.

In the tanso (solo) qualifying runs held on the 26th, both Manabu Fujinaka, in the 3-rotor #88 “APP with YOKOHAMA” RX-7, and Yukio Matsui, in the 2-rotor #77 “EXEDY R Magic D1 Racing” RX-7, escaped elimination. They advanced into the tanso finals along with Masao Suenaga (who had been seeded from the qualifying runs) in his 3-rotor #7 “Team RE Amemiya SUNOCO” RX-7. Unfortunately, neither of them were able to finish in the top rung and thus would be starting from qualification in the tsuiso (chasing race) runs to be held the following day. In the next day’s tsuiso qualifiers, Fujinaka in the #88 competed against the previous round’s winner, the #5 of Takayama Kenji and, during the chase, “went in for the attack but [his] swing back was a little too early” which caused him to spin and resulted in his elimination. The #7 Suenaga (Masao) competed against Matsui’s #77. Later saying that his “strategy and his driving just didn’t click,” Suenaga’s outside line became tenuous and his loss of composure caused him to be defeated by Matsui. Riding on this momentum Matsui continued on to beat #6 Akinori Utsumi in the best 16 and then #28 Tsutomu Fujio in the best 8 to advance into the top 4.

In the semi finals Matsui competed against ranking leader #92 Kuniaki Takahashi but failed to take the advantage while chasing in the first run. In the second run his drift was matched by Takahashi and he was eliminated. Matsui then turned his sights to the shootout for 3rd place and went up against #60 Yoichi Imamura. Their battle developed into a neck and neck bout that ended in a rematch in which Matsui ultimately performed a stunningly close drift during his chase run to defeat Imamura. Having attained 3rd place Matsui stated, “the car is now pretty well perfectly set up to my style. I love driving it.” It looks as though we can expect a great deal from him in the future. Congratulations go out to R Magic’s Mr Ohara.