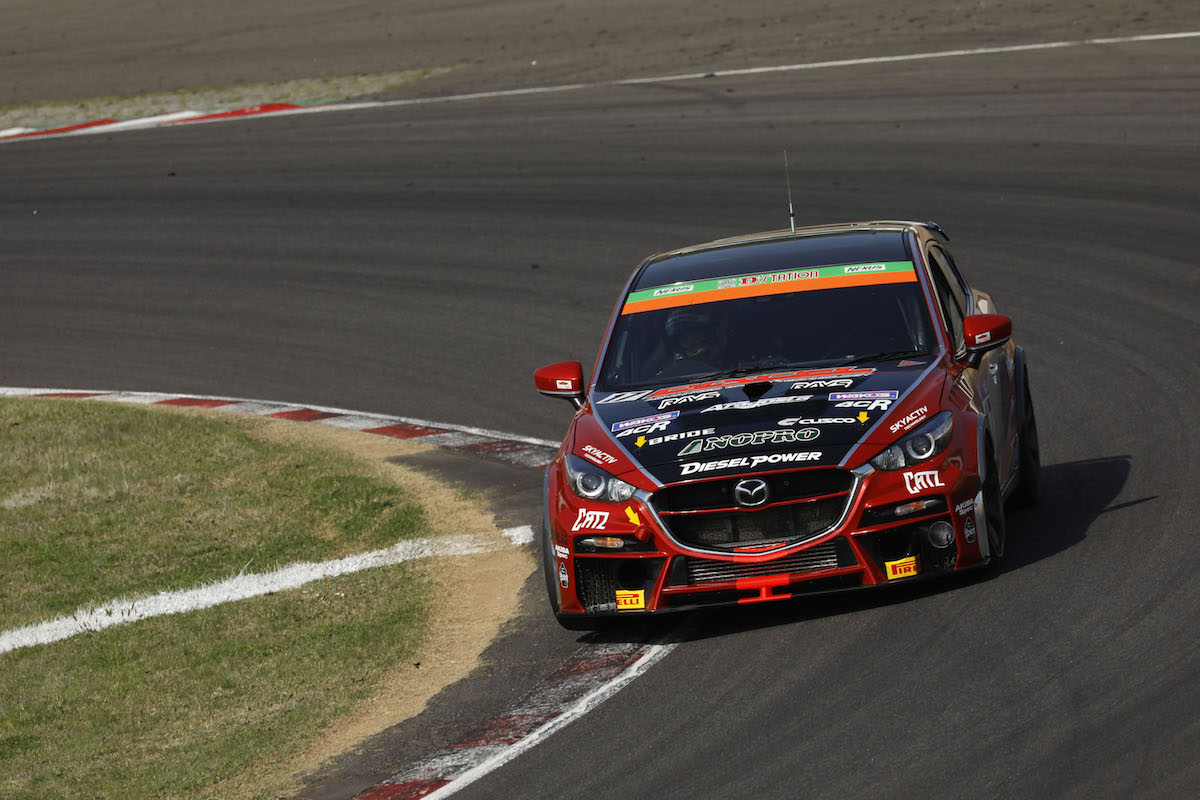 The 3-hour race for round 2 of the Super Taikyu (S-Tai) series was held over April 28th (Sat) to 29th (Sun) at Sportsland SUGO where the NOPRO Axela SKY-D (Tatsuya Tanigawa / Tatsuya Nogami / Toshihiko Nogami) competed in the Group 1 race on Sunday and earned their first podium of the season with a 2nd place finish following a tenacious performance in the ST-2 class. In Saturday’s Group 2 race the TEAM 221 Roadster (Katsuhiko Tsutsui / Ryuichiro Otsuka / Junichiro Yamashita / Koji Yamanishi) grabbed a 2nd place podium, adding series points to their race win in the opening round.

The ST-2 class consists of 2-liter, turbo cars and this year includes two Mitsubishi Lancers, one Subaru WRX STI and one Axela SKY-D. Alongside the ST-2 class, Group 1 consists of the ST-X class for FIA GT3 vehicles, and the ST-TCR class for the international standard TCR machines, making it an internationally rich group and saw as many as thirty entries for this race. The NOPRO Axela was the only diesel vehicle competing in this group. Tanigawa, who began behind the wheel of the Axela SKY-D, began from 4th place on the grid. Taking advantage of the car’s fuel efficiency, he drove for about 1 hour, 50 minutes without heading into the pits and, despite making contact with an ST-X machine that resulted in damage to the front wheel, he steadily continued to tick off laps. That effort paid off when the cars running in 3rd and 2nd fell out of the fight and raised him up to 2nd. From then on Tatsuya, then Toshihiko took the wheel and, at the closing stages of the race, the lead vehicle experienced technical trouble, presenting a chance to take victory. However the WRX STI was able to make it back to the track. At 5:00pm the checkered flag was waved and, 1 year and 1 month after the NOPRO Axela SKY-D made its debut, it grabbed its first podium finish. Team representative, Toshihiko Nogami related, “The race distance this time around was pretty short so I felt that it might be difficult to get to the podium so a 2nd place finish is an unexpected joy. The car continues to get faster and faster, and we’re taking full advantage of the car’s inherent fuel efficiency so I’m really looking forward to the next round’s 24-hour race. I hope all the Mazda fans will come out to Fuji Speedway and cheer us on.”

Under warm, spring weather, the race began at 2:20pm with a rolling start. After one formation lap the 24 cars of the ST-4 and ST-5 class launched into the first conrner at racing speed. Early on the #2 TEAM 221  Roadster’s Otuka caught the #66 and managed to take the lead from which point he fought off the fierce pursuing Fits. One hour after the start of the race the #37 Demio SKY-D’s gearbox broke, which saw oil spill out at S-Corner and the race and resulted in the first dispatch of the safety car (SC). Although the #2 Roadster relinquished the lead to a Fit at the mid-point of the race but after a long second dispatch of the SC, last driver Yamanishi engaged in a fight back. After taking the wheel for the fourth stint he moved up to 3rd place and then in the closing stages he managed to overtake the #88 Murakami Roadster and finished in 2nd place. Hiroyuki Murakami, from the Murakami Roadster, that secured the class title last year in the SUGO round, stated, “Our C-Driver crashed in qualifying and the left the air jack inoperable and so we drove without changing the tires. As expected the tire grips began to wane and I wasn’t able to protect our position. We were a bit flustered in this race and weren’t able to make the most of our team work. It’s too bad.” The #88 was overtaken by the #2 and the #4 Fits in the last lap and finished the race in 4th. TEAM 221’s representative, Katsuhiko Tsutsui related, “This time I wasn’t feeling in good form and so I had Yamanishi take my place. Starting driver, Otsuka also did a great job but it was Yamanishi’s fight-back in the last stint, which allowed us to get onto the podium. We were able to maintain our place as the point leader so I hope we can grab even more points at the 24 Hours of Fuji.”

Pole sitter, the #66 Demio 15MB, lost pace and fell back a few positions and to make matters worse it made contact with the #67 Fit. This caused it to lose a panel and it was forced to go into the pits, taking it out of the fight for the podium and it ultimately finished in 7th. The #50 Roadster spun of track, causing damage to its oil filter and it had no choice but to retire. The #32 and #78 weren’t able to adequately lift their pace and finished the race in 8th and 9th. In the ST-4 class the #54 TC CORSE Roadster (Teruaki Kato / Yui Tsutsumi / Yuya Hiraki) started from 3rd place on the grid but was handed a penalty due to crossing the white line during the warm up runs and so it had to drive through the pits in the opening lap. All three drivers pushed as hard as they could but were unable to close the gap that had opened at the start of the race and they passed the finish line in 7th.