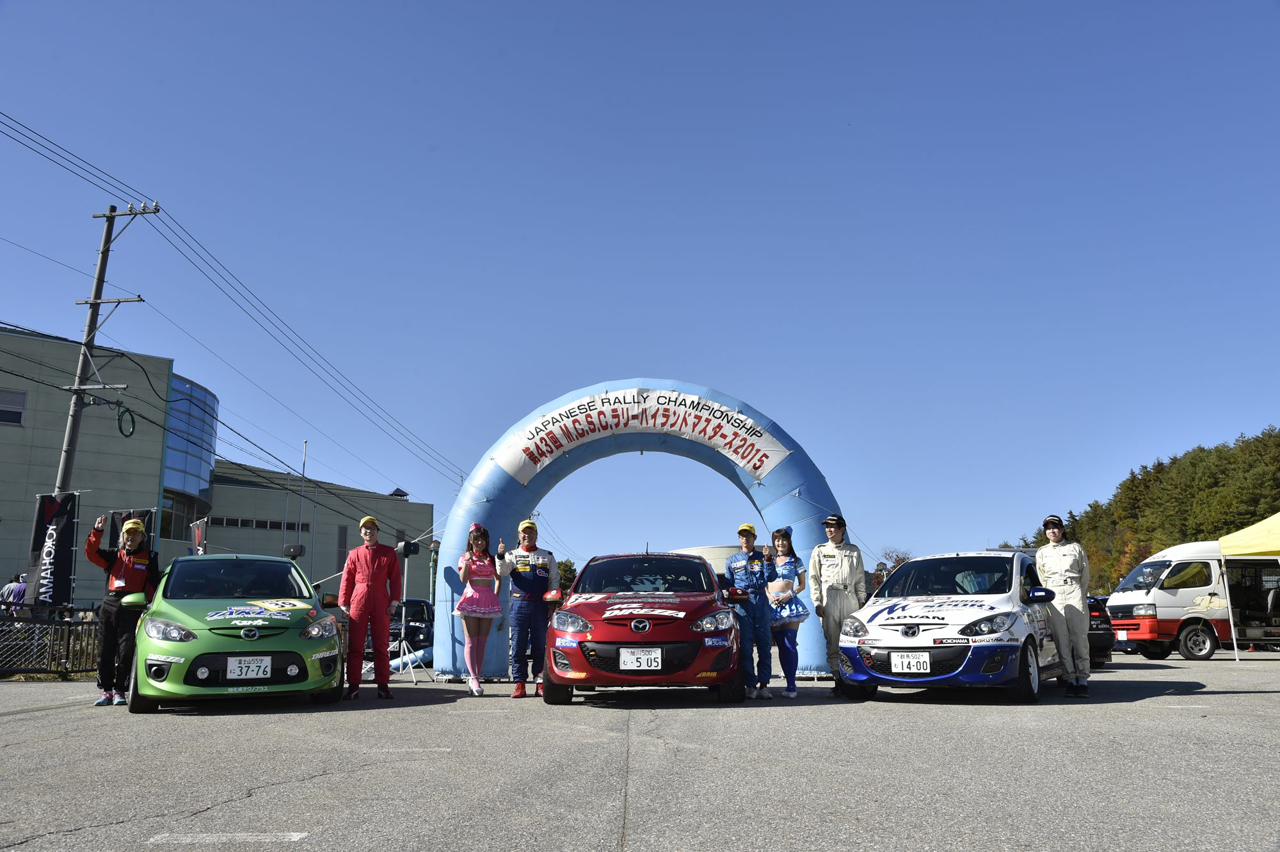 The Koichi Okada / Kunihiko Tsuruta driven Demio took victory in the JN3 class at the All Japan Rally Championship Round 8. Not only that, the Demio completely monopolized the podium in the JN3 class! We received a quote from Mr. Okada, so we’ll look back on round 8 focusing on his reflections.

Round 8 of the 2015 All Japan Rally Championship Series, the “43rd MCSC Rally Highland Masters 2015,” was held over October 16th (Fri) to 18th (Sun) around Takayama, Gifu Prefecture where the Keystone Navigator DE Demio of Koichi Okada / Kunihiko Tsuruta took victory in the JN3 class to make it a 3-round winning streak. On top of this the DE Demio monopolized 2nd to 4th place. The Highland Masters boasts the longest history of any event within the All Japan Rally Championship, with competitors in each class carrying out fiercely close battles with only fraction-of-a-second differences on the tarmac road surface.

After carrying out reconnaissance on the 16th, Day 1 on the 17th was met with clear autumn skies. The day consisted of three forests roads, run twice, with a service stop in between, to make it a total of 6 Special Stages (total SS distance 42.22km). Okada pulled away from the chasing competition with a large margin in every SS. Marking differences of between 4.5 to 8.2 seconds in each SS, he build up a total margin of over 30 seconds by the time the day was out. Incidentally, his difference with the machine in 3rd was more than 1 minute, 30 seconds. Okada commented, “Day 1 saw the usual uphill Dayoshi SS1, followed by the famous Aoya downhill SS2, then the road surface changed from gravel to tarmac for the Musugo SS3. The Okada Demio made light work of the two loops of this course, taking the best time in every SS and finished the day with a 33.4 second lead.”

Day 2 on the 18th also consisted of two runs on three Special Stages, to make it six SSs with a total distance of 45.62km. Utilizing a route that mixed in the reverse forest road runs from Day 1, the up-down variation was not as severe as the previous day but the twisty, tight corner format remained. Okada reflected on Day 2, “This time around there was some abnormal noise coming from the left side of the undercarriage so we drove a little conservatively to avoid damaging the machine. As a result we lost nearly 18 seconds in SS8 and SS9 to see our margin fall to about 15 seconds. That provided me with a kick in the butt and I attacked the next three SSs without holding back. This allowed us to finish Day 1 and Day 2 with a 47 second difference and take victory.” Despite falling back in Day 2’s first two stages, he managed the top time in the following SSs to take the win.

With this, Okada has taken a 3-round winning streak from round 6. He related, “At Rally Hokkaido it felt almost like running alone, but here at the Highland Masters the 8-car battle in the JN3 class was a tough fight right until the end and I couldn’t afford to let up at all. This was the first time within the 8 rounds of the 2015 All Japan Rally Championship in which both days were blessed with fine weather. The dry track conditions allowed us to attack the course full throttle for the first time in recent memory. With this I’ve managed to take a 3-round winning streak since Monterey round 6! A total of 5 wins and being able to take a win after securing the championship is a dream come true. On top of that, co-driver Kunihiko Tsuruta, who was forced to miss out on a few races, has also secured the championship. We are going to do our best to take victory in the next round at Shinshiro and make it a 4-round winning streak!”

The Shinshiro rally will be held from October 30th to November 1st. Let’s hope Okada and the Demio will have continued success in the next round.