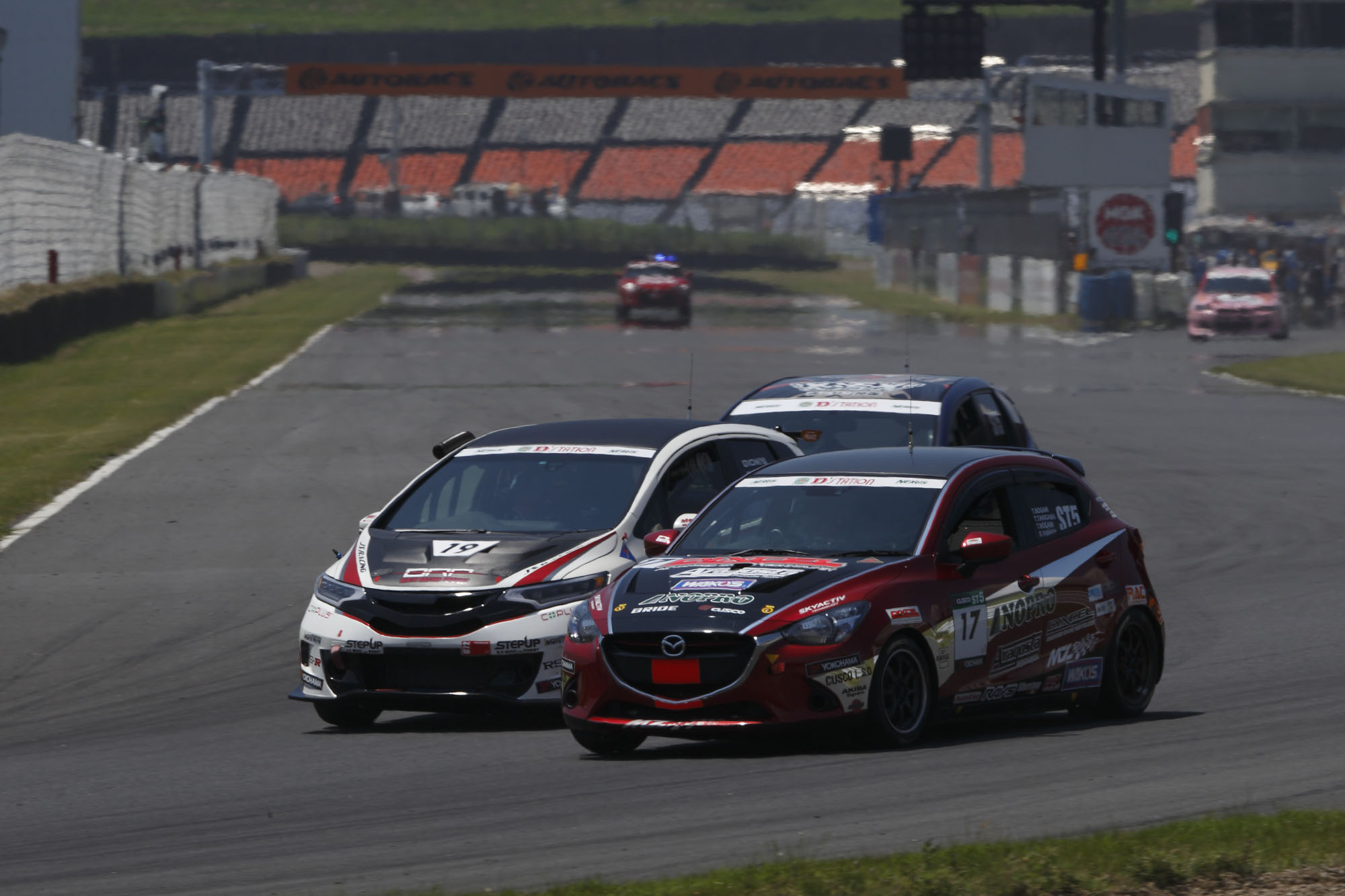 One month since the 8-hour race at Fuji, round 4 of the Super Taikyu series returned to its regular 3-hour format for the Kyushu race held at Autopolis, Oita prefecture. Here the NOPRO Demio SKY-D took home 4th in the ST5 class, while the TCR Roadster achieved 5th in the ST4 class.

Consistently lifting its pace with every race, the NOPRO Demio SKY-D was a mere 2 seconds behind the average qualifying times of the class top 3 Fits and secured 5th on the grid which, when looking back on previous races, demonstrates that the machine’s setup is undeniably coming into its own. It was clear that if they took advantage of the car’s fuel efficiency, there was a definite chance of taking a top spot. The challenge going into the race was to adjust the undercarriage settings to achieve the optimal balance between lap times and tire wear. At race start, Tanigawa took full advantage of the diesel’s torque and clearly displayed his driving skill to immediately push the car up to 2nd place. He then drove for 50 minutes at a steady pace, after which he handed the wheel over to Tatsuya Nogami, who exited the pits after the team performed a tire change. Utilising the tire data obtained by Tanigawa, Nogami drove with a focus on achieving optimal lap times, then, with 50 minutes remaining, pitted to change tires, refuel and hand the car back over to Tanigawa. Tanigawa went on to achieve his best time in the remaining laps, finished out the race hot on the heels of the formidable Fits, and passed the checkered flag in 4th.

The blistering road surface temperature of Kyushu in summer took a tole on the Demio SKY-D. Being a diesel turbo, it’s auxiliary equipment weighs comparatively more than that of a gasoline car, causing it to be front-heavy, which makes it hard on the tires. The team will continue to carry out weight reduction efforts and improve the machine’s handling for future rounds. Diver Tanigawa stated, “The car has gotten a lot faster. Even comparing it to last year’s SKY-G it is fast. That being said, the front is heavy so success really depends on how we use the tires. Owner, Mr Nogami (Toshihiko) says he still has things he wants to try out with the body settings. I’m looking forward to what kind of car he brings up.”

In the ST-4 class the TCR Roadster started from an 11th place qualification and the three drivers of Teruaki Kato, Tsubasa Kondo and Yui Tsutsumi steadily ticked of laps and gradually climbed up the order. In the end, they managed to keep the Hondas at bay, in spite of being lower in power, and followed behind the 4 Toyota 86s to finish 5th. As for the Murakami Motors Roadster, despite dropping back due to fuel system trouble mid-race, they managed to pit and repair the problem to see them back out on track and they completed the race in 14th.