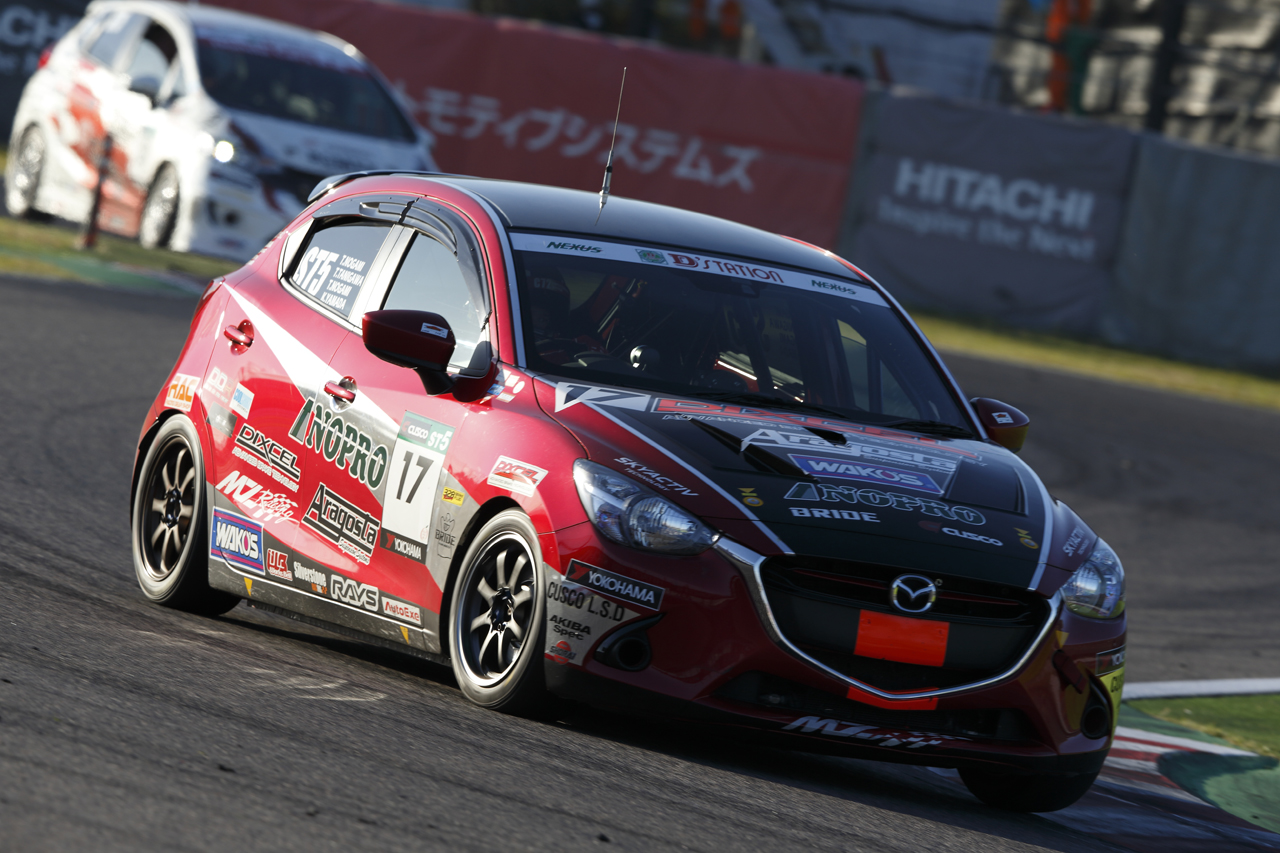 Round 6 of the Super Taikyu series was held at Suzuka Circuit on October 25th (Sun) where TEAM NOPRO’s Demio SKY-D (Toshihiko Nogami / Tatsuya Tanigawa / Tatsuya Nogami) grabbed 3rd place in the ST-5 class, their first podium of the season.

Using last round’s disappointing retirement as a springboard, the NOPRO Demio SKY-D had undergone significant improvements and was looking in fine form during Friday’s free practice sessions where it got itself fully prepared for qualifying. During B-driver qualifying, Tanigawa marked the third fastest time and closed the gap with the Fit 3, which in the season opening around was 10 seconds faster, to be between 2-3 seconds within its time. It was now achieving speeds that were right up there with the Fit 2s.

Tanigawa served as starting driver in the final race and, beginning from 5th place, he jumped up to 3rd in the first lap. The safety car was dispatched in lap 20 when a vehicle from a different class crashed and at this point he went into the pits. After replacing tires and changing drivers to Tatsuya Nogami they sent the car back out onto the track. At this point incidents such as another team being penalized saw them rise up to ST-5 class leader. Tatsuya went on to display a solid drive and, at lap 42, changed over to Tanigawa. Although they would drop back down to 2nd during pit work, they maintained a large margin between themselves and the rest of the competition. Unfortunately, however, there would be another accident on the course that would force the SC to come back out again. With this the large margin they had built up was erased and when the race resumed with 8 laps remaining, a rival to their rear inched closer and closer and they fell back to 3rd with three laps remaining. Never giving in, Tanigawa remained right on the heels of the Fit 3 in 2nd and passed the checkered flag just 2 seconds behind at the end of the 3-hour race.

The DXL Aragosta NOPRO Demio SKY-D managed to end its debut season with a 3rd place podium finish and finished 4th in the series behind the three fits.

The two MZRacing family ST-4 class roadsters, the #54 TC CORSE (Kato/Kondo/Tsutsumi) and #88 Murakami Motors (Murakami/TOMISAN/Wakiya) went into this race with suspension settings focused on cornering. Within the 20-car crowded battleground of the ST-4 class, they went up against S2000s and Toyota 86s that were overwhelmingly fast in the two straights at Suzuka. On the other hand, the roadsters were clearly showing superior handling in the corners. Against this backdrop the #88 Murakami Roadster experienced some trouble. With an overheating issue that saw water temperature rise over 100°C, they were forced to abandon their time attack. On the other hand, the #54 TCR Roadster saw its B-driver record a time of 2’22’’84 that was right up their with its rivals and secured 11th place out of the 20 competitors. Despite not carrying out an all out time attack, the #88 Murakami Motors also passed through qualifying to see them starting the race from 16th. After qualifying was concluded, the Murakami Motors mechanics were forced to carry out engine replacement work.

On the 25th (Sun) Suzuka Circuit was blessed with fine autumn weather and with a large number of spectators out to watch, the 46 cars began the 3-hour endurance race at 1:00pm. The #54 TC CORSE progressed through the race in excellent condition and steadily rose through the ranks of the melee to be engaging in a battle for 4th. Then, at about the 40-minute mark, the safety car was dispatched. At this point all competitors went into the pits and #54’s Kato handed the wheel over to Tsutsumi. However, just a few laps after this the SC was dispatched again and they were forced into slow laps around the course. The SC would be sent out one more time after this, which significantly reduced their margin so that they were forced into a tough battle for position in the ST-4 class. The two roadsters fought diligently to take advantage of their cornering performance and reduce tire wear. However, with the SC being dispatched as many as three times, their rivals were also able to keep tire deterioration to a minimum and their advantage was minimized.

With approximately 40 minutes remaining, one of the two ST-4s that were battling in front of the #88 forcibly tried to overtake at the hairpin. Ultimately it made contact with the other vehicle, lost control and slammed into the side of the #88. This caused the #88 to crash headlong into the guardrail on the outside of the hairpin exit and forced a retirement. Speeding towards the finish line, the #54’s Kondo was undertaking a fierce battle for 6th place and as he passed the control line on the last lap was crowded together with three ST-4s with only a second’s difference between them. Although it was a spectacular fight, the #54 ultimately finished the race in 8th.

After the race, Murakami related, “It was a shame we were forced to retire but the most important thing is that all our drivers are safe.” Kato followed up saying, “We were running at an even faster pace than expected so I can’t help but think the timing of the pace car worked against us. Still I’m proud of the fact that we have successfully completed 12 races in a row without incident since last season.”

The Super Taikyu came to a close with this round 6 race. With the SKY-D Demio taking a podium, each of the Mazda teams have come away from the season having attained positive results. We can’t wait to see what the 2016 season has in store for us.