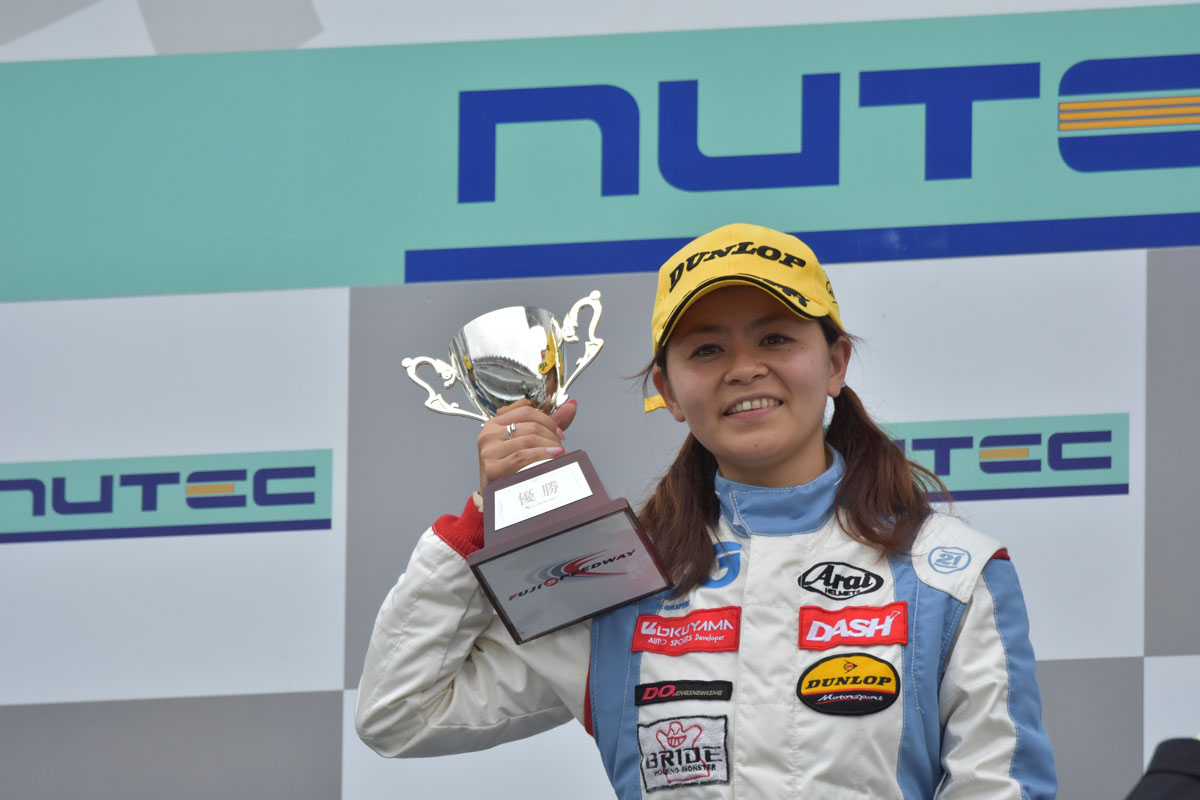 Round 4 of the 2015 Fuji Champion Race Series (FCR) was held over August 29th to 30th. All categories featuring Mazda vehicles were competed under what were unfortunately grey skies and over a wet road surface. That being said, it unfolded into an exciting weekend full of drama and thrills.

The biggest news to come out of the races was that Machida achieved her first FCR victory behind the wheel of her SKYACTIV-D mounted new model #55 “DO-ENG Okayama Demio”. Although Machida was forced to be content with both qualifying and finishing 3rd in the last two rounds, this time around she was to secure pole position for the final race. At race start she achieved a superb shot off the line and managed to safely maintain her lead for the remainder of the race. “Everyone in the team did a great job producing a machine that enabled me to take victory. I’m really happy to be able take the win in this race that creates a great deal of excitement for the Demio.”

Last year’s champion, #75 Nishiyama took 3rd in this round and, seemingly impressed, went on to say, “I’ve been able to discover the superior performance that the turbo diesel is capable of in the second half of the course after Dunlop Corner.” Acting technical advisor for this race, Tachimoto, “Getting the hang of it can be a little tricky, so I think the true potential of the SKYACTIV-D has yet to be revealed, but by installing a more powerful oil cooler we’ve been able to increase its competitiveness.” With this the fight for the championship is set to become a 3-way battle that includes #34 Tokiwa.

In the NC Roadster One Make, which runs alongside the Demio race, the Challenge Class saw #71 Tosaka pass the checkered flag in the lead. With two straight wins in a row he has all but secured his second consecutive championship. On the other hand, in the Open Class, with a few rivals absent, it was expected that #8 Kikuchi would dominate, but at the final lap he unbelievably ran out of fuel! This allowed #7 Takahashi to grab his first victory. Kikuchi managed to restart to take 2nd, but this means the championship will not be decided until the final round.

There was also a lot of drama in the Roadster Cup that was held on the 29th. Although the forecast was for dry conditions, during the race rain began to fall and the choice of tire became a huge factor of success. This was especially prevalent in the NB8 class where #75 Sawada followed up a class 10th (overall 16th) qualification with an amazing fight back from the tail end. The biggest reason for this was the tire choice on the previous day. Unable to get his hands on Kumho V700s due to a lock of stock, he was forced to head out with deep tread V720 tires. These pulled out their optimal performance in the rain that fell in the race, which allowed him to take his first victory in his 4 years of competition. Having carried out a last minute tire change on the grid right before race-start, #24 Azuma also grabbed his first 2nd place podium.

In the Roadster Cup’s NA6 class #7 Mogi grabbed his third consecutive victory to secure the championship. In the NA8 class #1 Yamagata, who achieved 2 victories in a row from the opening round, was absent, leaving #0 Ohara to take his season first win. This leaves the fight for the championship in this class to be decided in the final round.

In the final race held for the N1 One Make on the 30th, #8 Fukunaga also achieved an impressive fight back from a 10th place qualification to achieve his second consecutive victory. His decision to change over to the rain tires he used in qualifying, which still had treads remaining, turned out to be a wise move. Last year’s champion, #1 Ohno just managed to maintain his place as point leader by achieving a 5th place finish but this makes things interesting because it means he will have to finished 1st in the final race to secure the championship.

Round 5, the last round for these series that compete with Mazda machines, excluding the NA1600, will be held over October 31st – November 11th. Keep an eye out for our report on those races.