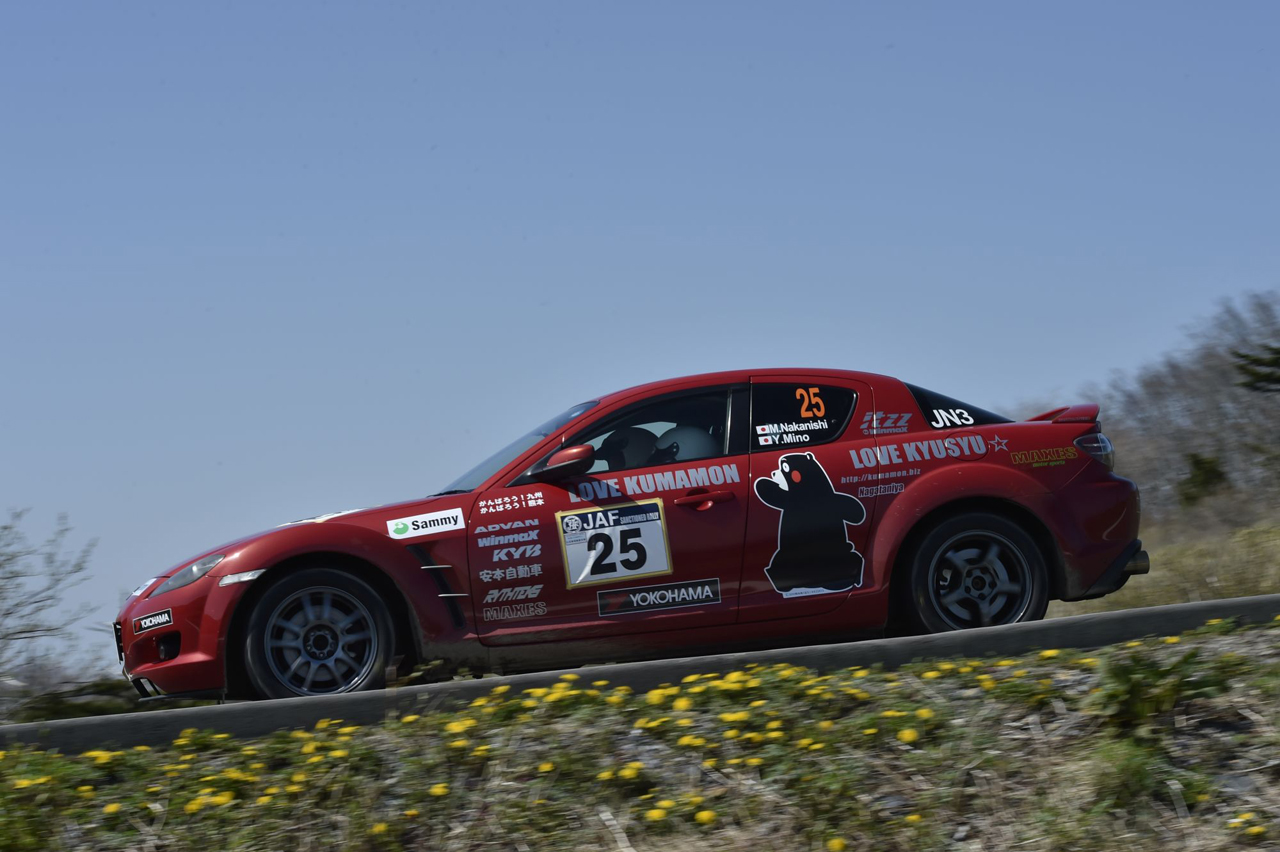 Round 2 of the All Japan Rally Championship (JRC), the Kumakogen Rally, was held over April 30th to May 1st at Kumakogen, Ehime Prefecture, Shikoku, where the Mazda Demio of Koichi Okada / Soichi Kanno, that competed in the JN3 class, unfortunately ended the event in a retirement after going off course. Competing in the same class, the Mazda RX-8 of Masato Nakanishi / Yuki Mino finished the rally in 2nd.

Coinciding with the Golden Week holiday, this rally turned into a bustling event with the service park located in the former Mikawa ski area seeing over 1000 spectators, including adults and children, coming out from the Chugoku, Shikoku and Kyushu areas. The course was located around the former Mikawa ski area, consisted of paved forest roads and included a long, 23.39km long SS that would prove to be quite a strain for the tires and brakes of the competitors. Furthermore, being the highest altitude rally within the JRC, it took quite a toll on the engines as well. Not only that, as the total combined SS length came to a hefty 158km, the points attained here would be worth 1.5X the standard, making it one of the most important rounds of the series.

Looking towards the JN3 class, we see the Okada/Kanno Mazda Demio, which took 2nd behind the Toyota Vitz in the last round, the Karatsu Rally. Having utilized the last two weeks leading up to this event to adjust their undercarriage settings, they headed into this round having significantly boosted the potential of their machine. Day 1 began from the short, 4.95km Otani Stage where Okada finished 2nd, 1.5 seconds behind his rival, the Amano Vitz. Okada energetically commented, “I think if I hadn’t made errors in two of the corners I would probably be running in the lead. The Demio felt great today, it definitely had the potential to beat Amano.” However, some trouble would occur in SS2. In the uphill first half of the 13.89km stage, he steadily reduced the gap, and was also running well in the high-speed section at the highest altitude point of the rally. However, after passing through the tire and break punishing downhill section in the second half, and with 2km to go, he suddenly lost second gear. Despite being somehow able to run the remainder of the stage without it, he fell 12.2 seconds behind the rally lead. Knowing that if he could clear the next 23.93km stage, he would be able to return to the service park, Okada refused to throw in the towel and got through only using 1st and 3rd gears. However, at the Liaison section he also lost 1st gear and Okada had to tentatively inch the car back to the service park. Due to not having a spare gear box on hand, the team did everything they could to repair their machine as much as possible, but were unable to achieve more than rudimentary patch ups and they decided to continue their rally with only 3rd gear.

Despite a large distance remaining, a defiant Okada stated, “The car is not in good condition but there’s nothing we can do about that now. Keeping the whole series in mind, the fact that points here are worth 1.5X the standard means that if I can manage to finish in 2nd then the overall points I can attain would be 26.5. I’m definitely going to finish this rally.” Completing Day 1 in this situation, it was then time to move onto the morning of Day 2. In the first half of Day 2 he conscientiously drove the car as if treading on thin ice. Due to the hard work of the mechanics it looked as if he was going to be able to reach the finish line. However, in the 14.32km Nishitani SS12, he shockingly went off course at a tight right corner following an almost 1km straight. The Okada Demio ended up flying a significant distance off course and into the bushes from where it could not be readily removed. Unfortunately, it would be forced to retire. Okada lamented, “I had just been thinking that the gear box would last through the final stage’s tough hairpin climb, when I misheard “tight corner” as “light corner” and went off course. The finish line was right before our eyes so I’m incredibly disappointed. I can’t express to the mechanics how mortified I am.” The Amano Vitz went on to take victory in the rally, followed in 2nd by the Nakanishi/Mino RX-8, which had been struggling with technical difficulties of their own. In the JN1 class the Hisashi Matsubara / Yoshiaki Wada Demio 15MB finished in 3rd.

The next round, the Wakasa Rally 2016, will be held over May 21st to 22nd around Oi, Oi District, Fukui Prefecture. MZRacing will be hoping for a comeback from Okada and the team.