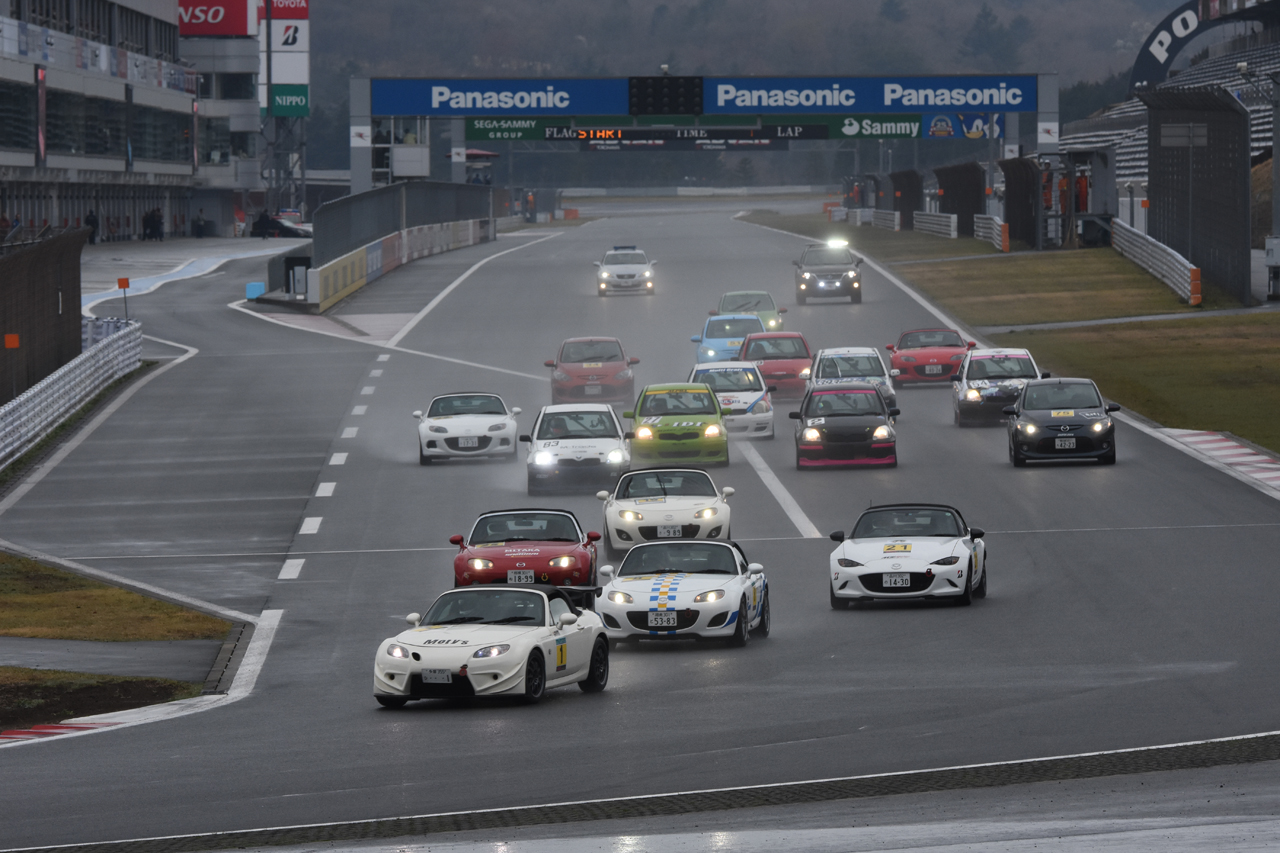 The opening round of the 2016 Fuji Champion Race series (“Fuji Chan”) was held over April 2nd (Sat) to 3rd (Sun). Making an entry for the first time, the ND Roadster, similar to the NC, will be set into the Challenge and Open class. The modification restricted Challenge Class cars are also able to compete in the Party Race III that is held at Tsukuba, SUGO and Okayama.

This time around the races in which Mazda cars competed were all held on the 3rd. This year the categories have been altered, with the first race being the N1, where numbered NA / NB Roadsters compete, then the second race being a mixed race where numbered NC / ND Roadsters, Demios and so on compete.
Despite the engines of the N1 being close to standard, the vehicle is lighter and very nimble in the corners. On the other hand, the NA/NB Roadster Cup (RSC) are numbered cars where tuning is permitted and their acceleration on the straights is overwhelmingly superior. Obviously the RSC cars are faster in the course records, but the in the wet, power is less of an advantage and 8 experienced drivers from the N1 class were mixed in among the RSC drivers in the qualifying results.

The first race started at 11:44am. The race length was 9 laps (in between last year’s N1 10 laps and RSC 8 laps). The overall top three in the RSC were the NA8 class’ #88 Kensuke Yamada, and the NB8’s #91 Makoto Kamiya, and #11 Yuichi Toda. These three went on to pull way out in front of the rest of the pack in the final race.
In the NA6, 2014 champion, #23 Minoru Yamakawa made an amazing comeback from a disastrous start. He almost effortlessly passed the two rivals in front of him at the exit to 100R corner. In the N1, last year’s champion #1 Toshiya Ono lead the race unchallenged. His strong performance on the wet road surface was quite impressive.
In the second race all eyes were focused on the Challenge Class’ #21 Toshikatsu Arai who garnered a lot of attention through his performance in the qualification under full wet conditions. Compared to the NC Roadster, the displacement is a relatively small 500cc, but he managed to secure overall 3rd place on the grid. In the NC Open class, Last year’s champion #1 Yuji Takahashi qualified 1st, followed by #8 Satoshi Kikuchi.

The race started at 1:24pm where Kikuchi and Arai rapidly jumped up in the first lap. Pole sitter Takahashi, who suddenly had fallen back to 3rd, immediately re-overtook Arai and was momentarily within range of Kikuchi. Then, although he was briefly in the lead on the final lap, at 13 Corner, with victory in his sights, he allowed his opponent to get passed him. It should be noted that Kikuchi looked set to take the championship last year but an injury incurred in a motorcycle accident forced him to miss the final round. The rivalry between these two looks set to be quite exciting this season.
In the NC Challenge Class, #22 Koji Nakagiri took victory. He took the win driving the NR-A of “Ranman”, who is currently recuperating, having moved up from an RHT. Within the Demios, #75 Takashi Nishiyama took a landslide victory, making it a great start to retake the title he lost two years ago.
Separate to these two races, only one Mazda vehicle competed in the NA1600 class, #31 Kenichi Takahashi, who jumped up from a 2nd place qualification to take a superb race win. With the rain ceasing for the final race, he predicted that the road surface would dry halfway in, so chose to sport slick rather than shallow groove tires. This veteran clearly utilized his experience to take away the victory.

The 2016 Fuji Chan series events will be held 6 times in the year, with each class having 4 races in the season. The next races for the Roadster N1 and NA/NB RSC will be held on May 14th (Sat), while the NC/ND RSC will occur on June 25th (Sat).