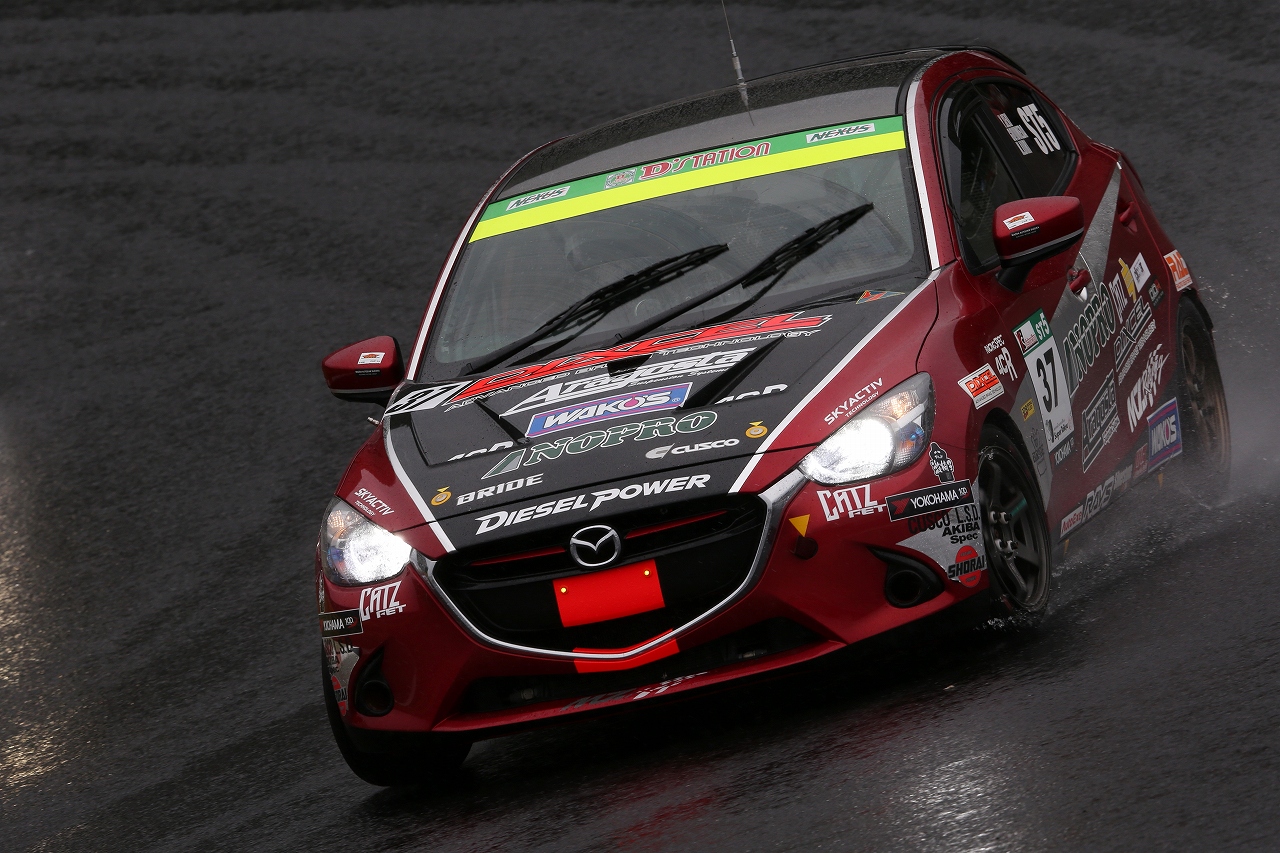 Round 6 of the Super Taikyu Series was held October 15th at Okayama International Circuit where the #37 “DXL Aragosta NOPRO Demio SKY-D” (Yutaka Seki / Go Umeda / Kaoru Ijiri) displayed a brilliant race under rainy conditions to take their second consecutive victory following on from round 5. The #66 “odula MAZDA DEMIO 15MB” (Ric Hashimoto / Ryuichiro Ohtsuka / Takayuki Takechi) grabbed its first podium with a 2nd place finish to make it a 1-2 finish for the Demio in that final round.

Although the weather forecast for qualifying on the 14th was for rain, the entire qualifying sessions were able to be carried out on a dry road surface. Here the #88 Murakami Motors Mazda Roadster ND (Hiroyuki Murakami / Takeshi Wakitani), which secured the ST-5 class championship in the previous round, pulled out all the stops and recorded the fastest time. With this they secured the front right position at their home course to put them in a great place to try and take victory. However, it was revealed that the fuel they used was not being sold at the circuit, and this resulted in their qualifying time being eliminated and they had to start the final round from the tail end.

The 15th, race day, was held on a completely wet road surface due to the rain that continued to rain right from the night before. When the race began at 8:25am, the rain began to weaken but the start still proceeded behand the lead of the safety car (SC). From then the rainfall would oscillate between heavy and light downpours and so the #37 Demio that started from 7th on the grid judged that the rain would not let up. This led them to start the race with wet settings and when the SC left the course they immediately went into the pits. They had established a strategy of making just one pit. The SC would be dispatched another two times throughout the race and the timing of these dispatches would greatly influence the outcome of the race. The strategies that the #66 odula Demio and #37 NOPRO Demio developed took full advantage of the rainy conditions and the timing of the SC benefitted them both and this resulted in a battle for the top spot at the closing stages of the race between the #66 in the lead and the #37 in 2nd. In the end the #37 Demio took victory at the rainy Okayama and finished the season at 2nd in the rankings.  The #88 “Murakami Motors Roadster” that began from last place displayed an solid and tenacious fight back to pass the finish line in 8th. The #50 “LOVE DRIVE Roadster” (Marie Iwaoka / Hiroko Komatsu / Anna Inotsume) began from 8th on the grid and implemented and error free race in the difficult conditions to pass the checkered flag in 11th. The #32 (Akihiro Harashima / Naoya Kawajima / Junko Takahashi) suffered a spin in the middle of the race and were forced to retire. In the ST-4 class the #54 “RC CORSE Roadster” (Teruaki Kato / Yuui Tsutsumi) climbed up to 2nd place for a time and then went on to maintain 3rd until the final lap where it was passed and saw a podium finish slip out of its grasp by a mere 0.36 seconds.

#88 Murakami stated, “We were aiming to take victory here at our home course but a careless miss meant we missed out on the chance to achieve that. We’ll leave that for next year. The team has really progressed a lot this year but we may have become a little complacent when it comes to the essentials. I want to learn from this mistake and go on to challenge new things.” #66 Takechi related, “We’ve finally attained our first podium finish. This is my home course as well so this is pretty emotional for me. We still have a lot of things to learn as a team but the areas we have gradually worked on have finally led to this result.” #37 Team Principal, Nogami said, “The rain was great for our team. Our strategies regarding tires, fuel consumption, etc. all really fell into place. The whole team really came together to achieve two consecutive victories in the second half of the season. I want to send out a huge thank you to all of them.”

In the ST-3 class the #17 “DXL Aragosta NOPRO Axela SKY-D” (Tatsuya Tanigawa / Tatsuya Nogami / Toshihiko Nogami) was hit with turbine trouble about 1 hour after the start of the race and this left them with little boost that turned the race into a very frustrating struggle for the team. Still, they were able to race until the finish. They went on to state that along with round 5’s 10-hour race they were able to attain a large amount of valuable data. Team Principal and driver, Toshihiko Nogami stated, “We were unable to lift our times due to the technical issue, so it was really a frustrating race for the drivers. We still have a lot of areas we can work on that will allow us to mark down faster lap times, such as further weight reduction, so we intend to improve considerable from now.”