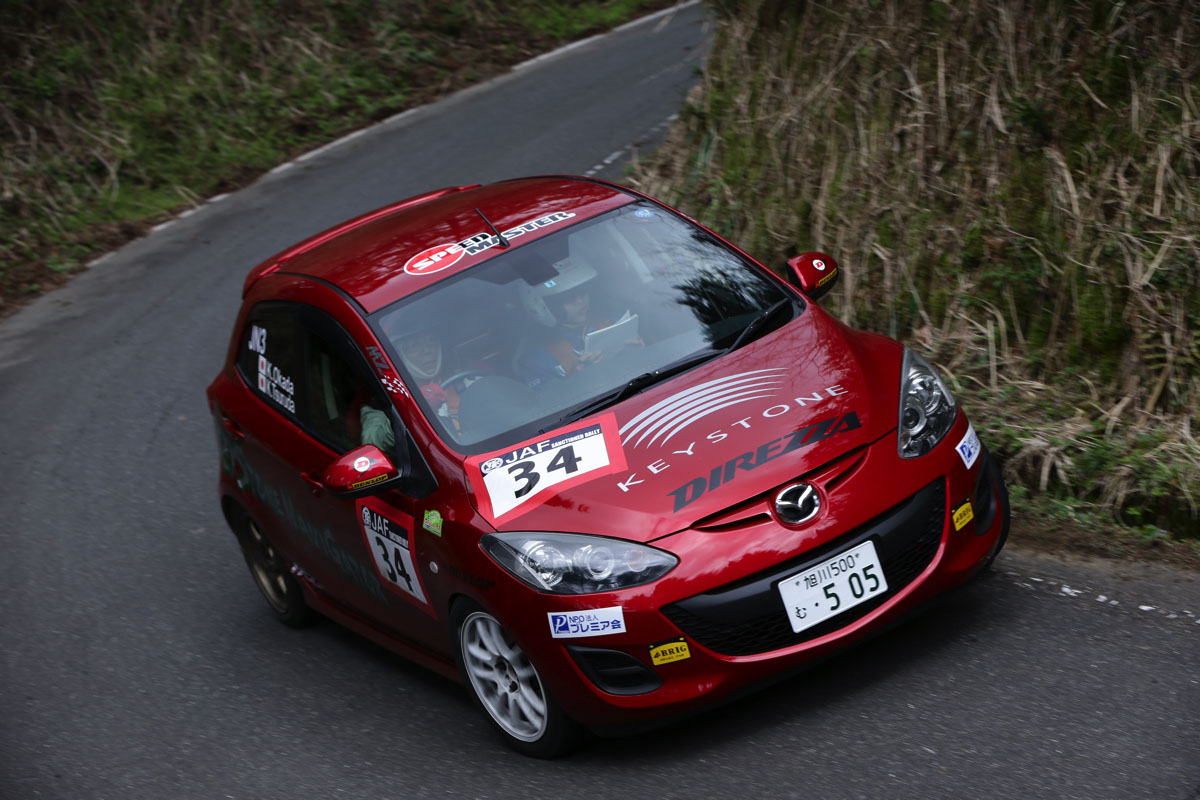 The first round of the 2015 All Japan Rally Championship series, the “Tour de Kyushu 2015 in Karatsu” was held over April 10th to 12th in the areas around Karatsu City, Saga Prefecture. 55 cars competed in this rally, which consisted of 12 tarmac special stages (SS) over a total of 71.23km and the Mazda Demio of Koichi Okada / Kunihiko Tsuruta took victory in the fiercely battled JN3 class.

The JN3 class sees NA 1.5 liter machines such as the Mazda Demio and Toyota Vitz compete, and the Kita Kyushu, Fukuoka Prefecture based “Keystone Navigator DL Demio” of Koichi Okada and Kunihiko Tsuruta took home class victory with a margin of 2 minutes and 35 seconds. Okada commented, “Until early February we were looking into racing with the new model diesel turbo Demio but due to various circumstance we had to abandon that idea. As we hurriedly made the decision to go with the proven old model Demio, right up until the eve of this opening round we were spending all our time getting the car prepared. The workmanship on this year’s machine is wonderful, it has been built into a car that turns like magic, it’s a joy to drive. On the down-slopes we had the momentum to catch up with the JN4 and JN5 class machines and right from SS1 we were pulling away from the competition. In total we built up a 2 minute 35 second margin over Fujita in 2nd place. The Demio is still really fast, isn’t it? I really want to send a thank you out to all those who support us. The stage for the next rally will be Kumakogen in Ehime Prefecture over May 8th-10th. We’re going to do our best to make it a winning streak.” From this season Okada’s Demio will be sporting soul red paintwork and their mechanics will be decked out in MZRacing crew suits for the entirety of the rally. We will be cheering them on and hoping they can pull out the pace to take the series title.

Coming home 2nd in the same class was the Demio of Yukihiro Fujita and Ayako Fujita, making it a 1-2 finish for the DE Mazda Demio 1.5 in the JN3 class. In addition, with Rina Ito / Yuichi Arai coming in 5th, and Kentaro Takano / Shoichi Amago finishing in 6th, 4 of the 6 machines that completed the Rally’s JN3 class were Mazda Demios. From here on out, the Demio, with its light weight and excellent handling, is set to continue its fine performance. Furthermore, with the RX-8 of Yasuo Matsuda / Yoshihiko Sugihara taking victory in their class, and Takahiro Kitami / Masahiko Kihara’s RX-8 finishing in 2nd, Mazda has also achieved a 1-2 finish in the JN1.

Round 2 will be the Kumakogen Rally to be held over May 8th-10th (Ehime Prefecture: Tarmac)