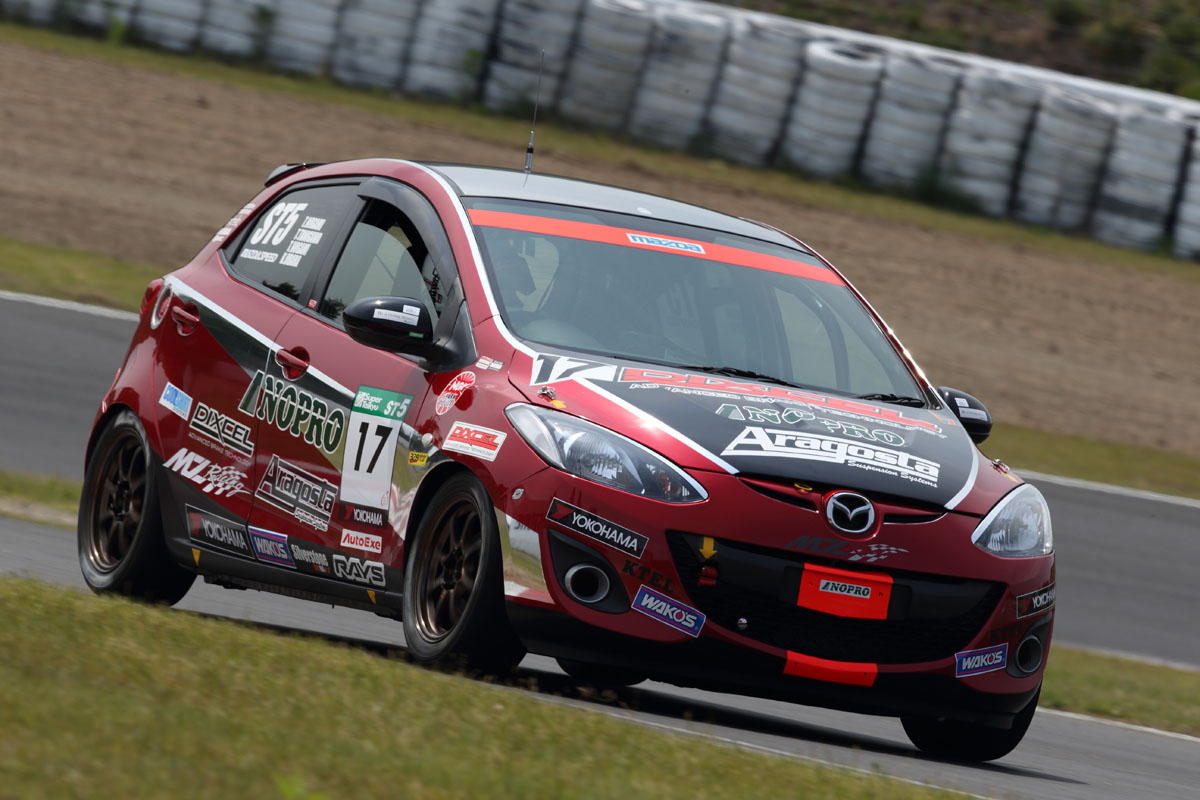 During the off season a complete overhaul of the track surface had been carried out at SUGO which had many concerned about premature wear on the tires used by each team. The NOPRO camp, which unfortunately missed out on a podium place in the opening round, focused primarily on collecting data on the new road surface and adjusting the ECU during the official practice and qualifier and therefore started Class 6th on the grid in the final race. The starting driver was Tanigawa. He was immediately able to start climbing up the ranks but, unable to match the pace of the Fit 3s taking the lead, it became a race of attrition. After an hour of keeping the gap close he handed the wheel over to Ohara. Ohara, a Miyagi local, then went on to maintain a valiant run that pushed the tires so hard to their limit that you began to see their steel belts. As before, after an hour of driving, he handed over the machine to Tanigawa for the last stint. Taking advantage of both the good fuel economy of the Demio as well as some missteps by the vehicles in front, Tanigawa overtook two rivals to put them in 2nd place. Ultimately, unable to close the gap between the consistent pace of the leading Fit 3, he ultimately passed the checkered flag in 2nd. Although the Fits monopolized the podium in the opener, in this second round the Demio was able to commandeer a step on dais of honor. It’s probably not too much to say that this is due to the firm direction of the veteran Toshihiko Nogami. Nogami stated, “The next round at Fuji is a 7 hour marathon so we are aiming to continue our winning streak from last year and further strengthen the capabilities of the team. Please expect big things.”

The #54 “TCR Roadster” (Teruaki Kato / Tsubasa Kondo / Daisaku Kobayashi) competed in the ST-4 class with Kobayashi, having just stepped up from the Roadster Party Race II, serving as the starting driver. All three drivers showed a solid run and after clean baton changes passed the checkered flag in 8th. In addition, the #88 “Murakami Motors Roadster” (Hiroyuki Murakami / Takeshi Wakiya) from Ehime Prefecture showed a momentary leading run but, due to technical issue in the second half, was unable to increase its pace and finished in 9th. Writing on his blog, Murakami relayed the following, “We were full of anxiety due to some machine troubles but were able to stick it out to the end and take class 9th. Still we were forced to stop at the last corner after passing the checkered flag. We lost first and second gear and needed the officials to push us back to our position. It was a close one. The challenges that we will face at the next round in Fuji are clear to us so we intend to keep striving step by step. Please give us your cheers.” Give it your all Murakami!