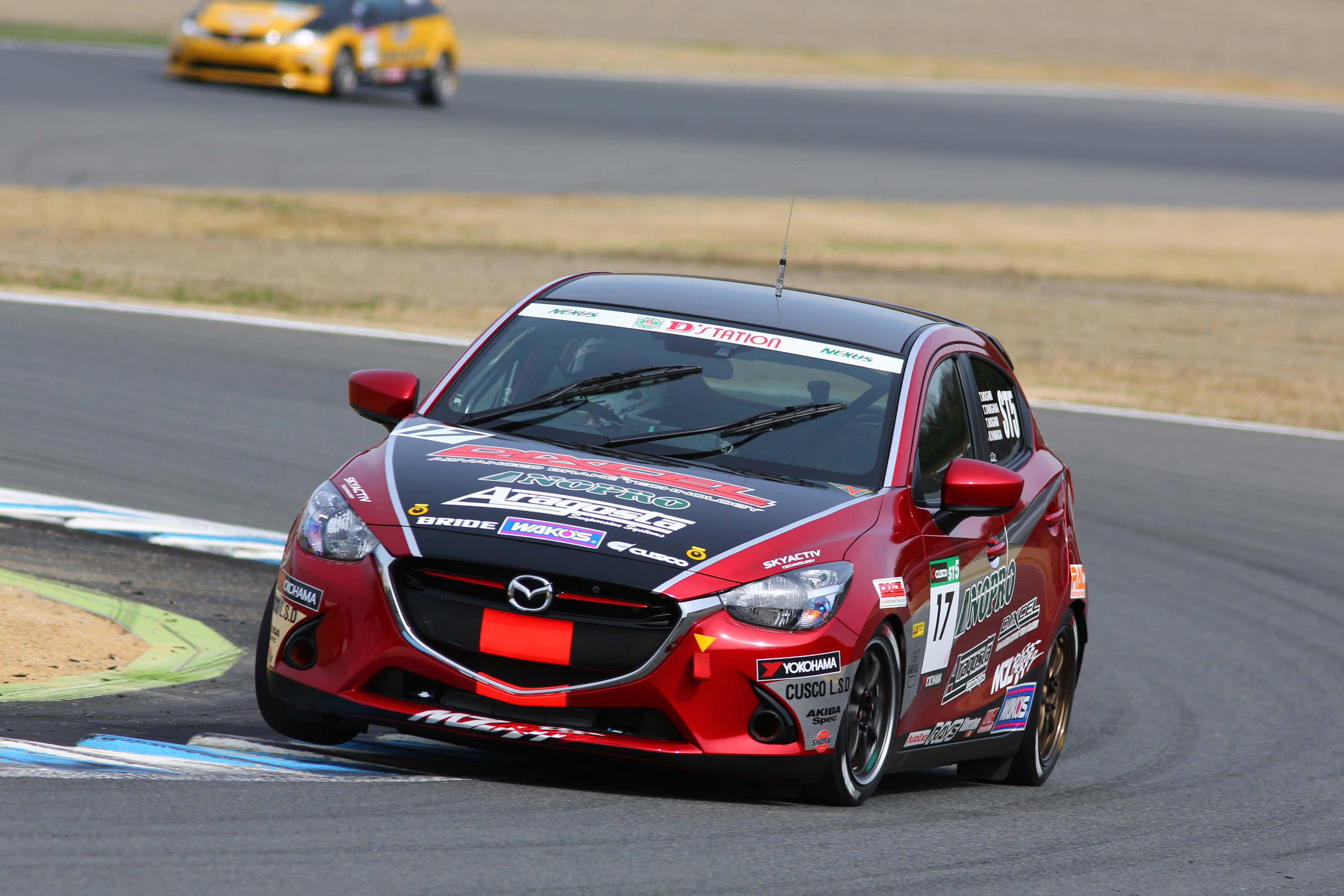 Round 1 of the Super Taikyu Series was held on March 29th, 2015 (Sun) at Twin Ring Motegi. At long last the DJ Demio from TEAM NOPRO, which has been garnering a great deal of attention right from development testing, will be making its race debut as the first domestically manufactured diesel entry in an endurance race. Although the weather became cloudy during the race, the start occurred under fine, spring weather of 18°C, with a road surface temperature of around 30°C.

Delivery of the NOPRO Demio, which is set to compete in the ST5 class (for vehicles of 1500cc or lower), was slightly delayed, which meant that, although the machine was in time for the opening round, it was not in a completely prepared state. Team representative, Toshihiko Nogami, stated that his focus would be on data collection; “As this is the first attempt with a diesel engine, we are hoping to just safely complete the entire race and see just what a diesel car can accomplish.” Taking the wheel as the starting driver at 12:20pm was Tatsuya Tanigawa. He would go onto to carry out a long stint that saw the vehicle run for 2 1/2 hours before its diesel fuel ran out. After handing the wheel over to Hiroki Yamada, Tanigawa said, “at the current pace, tire [wear] shouldn’t be a problem. If the fuel didn’t ran out you could push it even further. Anyways, for the time being I just focused on making sure we passed the checkered flag.” Compared to the DE-spec DEMIO, the front wheel axle load has been increased by approximately 80kg, but this doesn’t seem to have impacted negatively on the tires at this point. After this, with about 1 hour and 15 minutes left in the race, Yamada changed over to Tatsuya Nogami. Although he steadily ticked off laps, with about 20 minutes remaining, the vehicle ran out of fuel and returned to the pits to refuel and change drivers to Toshihiko Nogami. From that point onwards they drove the remainder of the 5-hour endurance race without a hitch. Looking back on the race, Toshihiko Nogami commented, “We managed to achieve our minimum goal of completing the entire race, so from now on, until the next race, I want to focus as much as possible on working on the car’s speed.”

In the ST4 class (2000cc or less) Murakami Motors and TC CORSE both entered NC Roadsters. Murakami Motors’ Mr Murakami commented, “Since this is the first round, we want to put in a solid run and see how reliable the car is and how it fares up against the competition. Compared to last year’s specifications, the underbody, engine parts, and so on, have been updated, while the cornering performance has also been improved. Although they had some trouble with the brakes in the final stages, they managed to complete the race. TC CORSE’s Mr Kato conferred on us the importance he places on machine balance, “I’m always keeping in mind that during a race the front/rear load should be 50:50, both when accelerating and braking. When setting up the vehicle 50:50 is essential, as is focusing on that fact during the race.” He went on to say that he will continue to work on this in the future and gradually perfect the car’s performance. The team steadily carried out the race completed in 10th.

In this opening round all three Mazda vehicles completed the 5-hour race. We’re holding out high hopes for further evolutions in these machines in the following rounds. Round 2 is a 3-hour endurance race scheduled to be held on May 24th (Sun) at Sportsland SUGO.