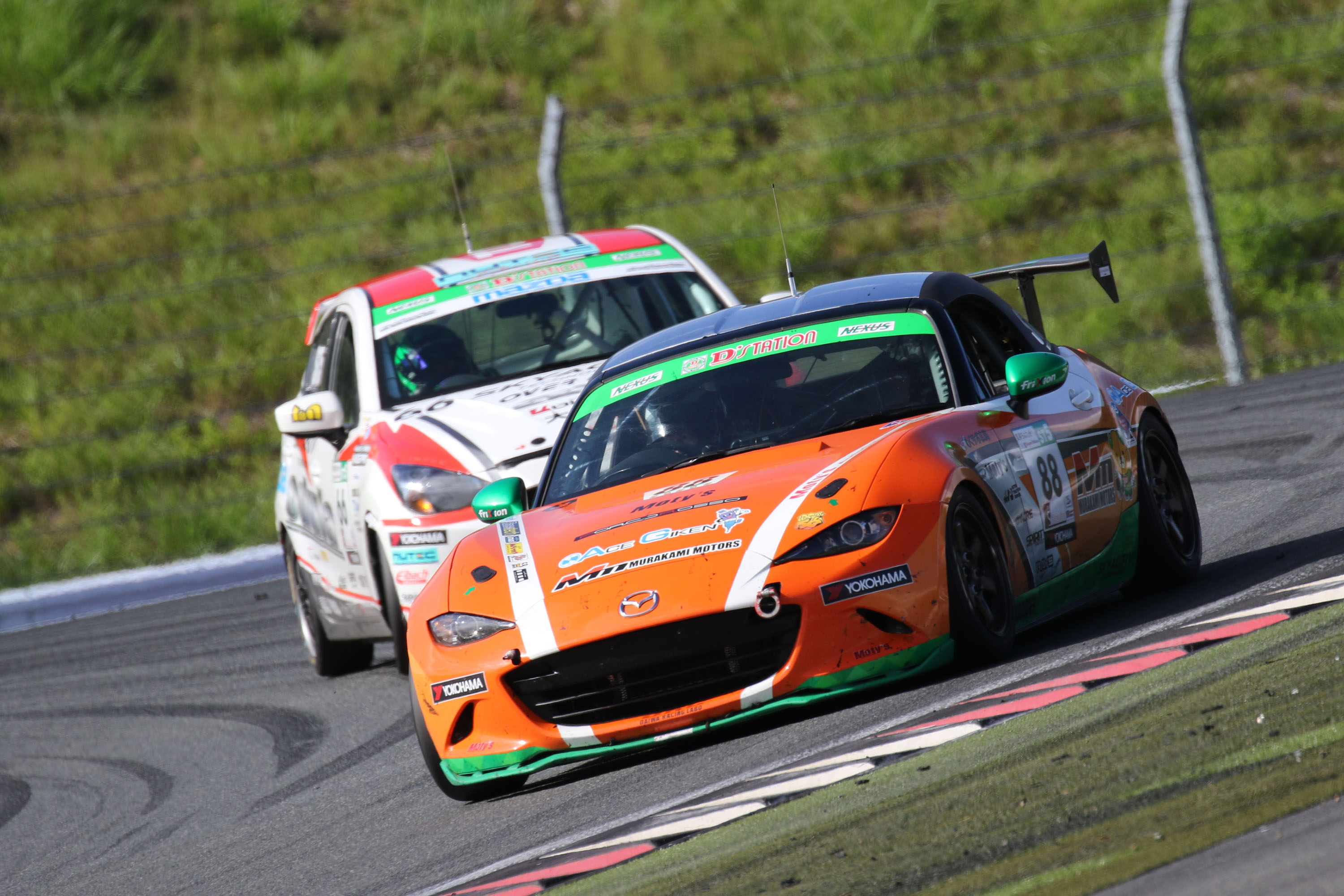 Round 4 of the Super Taikyu (S-Tai) was held over September 3rd to 4th at Fuji Speedway where the Murakami Motors Roadster (MX-5) grabbed a 3rd place podium finish in the ST-5 class and was followed closely by Team NOPRO’s Demio (Maxda 2) SKY-D. This result lifted the NOPRO Demio into the top of the series rankings making it an outstanding weekend for the Mazda vehicles．

Although from this year the Super Taikyu has altered its format to see race weekends consist of two separate races (one for the ST-X to ST-3 classes and one for the ST-4 to ST-5 classes) for this 9-hour race, the longest in the season, all classes started at the same time on grid. With this a total of 65 S-Tai machines gathered at Fuji Speedway. In the ST-5 class the ST Murakami Motors Roadster suffered some drivetrain issues early on in Thursday’s practice session, which would take until Friday morning to be completely repaired. Although it was looking like it was going to turn into a difficult week for the team, in the official qualifying session for the ST-5 class they managed to qualify 5th out of the 13 strong pack. Team owner, Murakami began behind the wheel for the beginning of the race, which began at 9:00am on Sunday morning under half wet conditions. Immediately following race start he found his path blocked by an accident involving rivals in front and this caused him to fall a little down the order. However, from then on he strongly began to tick off laps at a high pace while being careful to not overburden the drivetrain. After that, each of the 5 drivers took their turn behind the wheel of the Murakami Roadster as it gradually rose up to 3rd place where it passed the checkered flag. Team owner, Murakami stated, “We were a little worried about the durability of the car, so the team decided to take it easy and not push the car to it’s limit. In the end I think that actually resulted in us achieving a solid pace that led us to a podium finish. The parts that we were worried about really held fast for us.”

The only diesel machine to compete in the S-Tai series, the NOPRO Demio saw ace, Tatsuya Tanikawa take a long stint in the beginning, after which the baton was passed to Kaoru Ijiri and Toshihiko Nogami. After that,Tanikawa and Ijiri once again took the wheel with team owner, Tatsuya Nogami taking charge of the final stint. This saw Tanikawa driving the longest stint in class of 126 laps (approximately 4.5 hours). Although mid race the rear hatch became unlatched resulting in an orange flag (informs the driver that there is trouble with their machine) and they were forced to make one irregular pit stop, for the rest of the race the Demio SKY-D drove without issue and avoided getting embroiled in accidents with any other competitors. With the NOPRO Demio SKY-D finishing this race in 4th place, the #17 Team NOPRO has jumped up to the top of the class rankings. Driving the same team’s gasoline #37 DE Demio was Yoshihiro Kato, who was joined by female drivers, Mariko Iwaoka and Eriko Yamamoto who, despite this being their S-Tai debut, carried out a 72 and 52 lap stint, respectively and contributed to an 8th place finish. Taking the role of team principal for these two and giving them directions from the pits was Sekitoyo. He went on to say, “These two have only been in the team for about 2 months. In that short period of time they have learned and developed a great deal. I’m glad to see that we are able to carry out a good race on both the technical and mental side.”

The odula Demio 15MB that competed in the ST5 class unfortunately made contact with an STX class machine immediately after race start due to a driver error. Not only did they suffer damage to the car’s body, they also incurred a penalty that saw them fall far back down the order. Although they went on to complete 211 laps of the race, in the closing stages they experienced driveline issues that forced them into a retirement. Along with that, the TCR Roadster, the only MX-5 to run in the ST4 class, suffered steering system trouble early in the race and also had no choice but to retire. Yui Tsutsumi, who will be competing in the Global MX-5 Cup exhibition race on the 10th and 11th, stated, “The car felt really good and was running really well so it’s pretty disappointing. I’ll wash away this disappointment at Laguna Seca.”