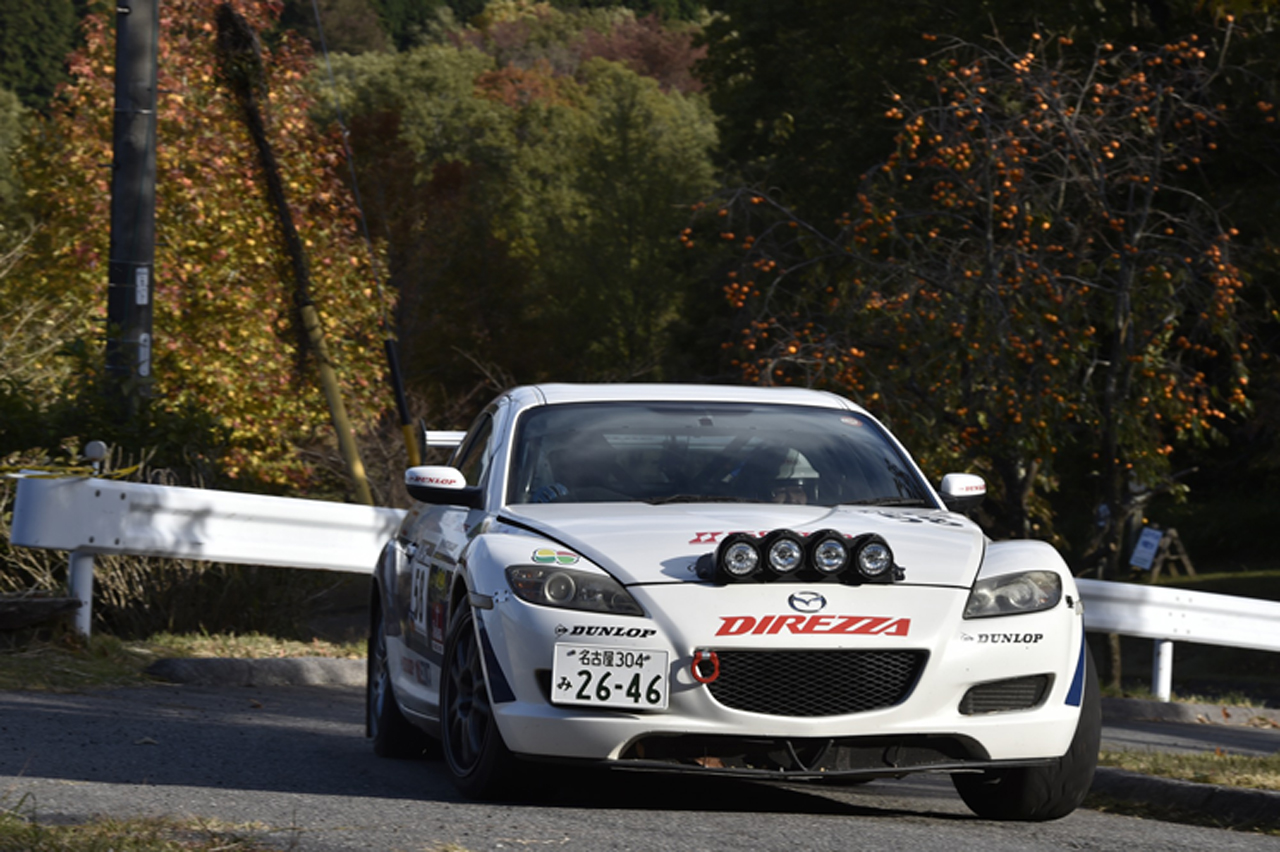 The final round of the 2015 All Japan Rally Championship, the “Shinjo Rally” was held over October 31st (Sat) – November 1st (Sun) where the 30-year veteran pair of Yasuo Matsuda / Yoshihiko Sugihara took victory in the JN1 class driving their RX-8 to secure the season title. Along with this, JN3 class champions, Koichi Okada / Kunihiko Tsuruta took their fourth straight victory in the DE Demio to make it 6 wins in the season.

Matsuda’s RX-8 was entered into the JN1 class for vehicles off 1.4 liters or less. With no rotary coefficient contained in this class’ regulations, the 1.3 liter GENESIS engine falls into this category. The fight for the JN1 class championship became a duke out between the RX-8s of Matsuda / Sugihara, who took victory in the opening round, “Tour de Kyushu 2015 in Karatsu” and that of Nakamura / Satoshi Furukawa, who grabbed the win in round 3, the “Wakasa Rally 2015.” In the final round Matsuda / Sugiwara needed to only place within the top 3 to take home the title, whereas Nakamura / Furukawa would have to place first at the bare minimum. It was under these circumstances that Nakamura / Furukawa pulled out times that were coming close to the leaders of the JN4 class, to see them pull well ahead of Matsuda / Sugihara and be running almost unchallenged in the lead. From that point onward Matsuda / Sugihara went on to protect their own position in 2nd place and it seemed like Nakamura / Furukawa had all but secured victory when, on Day 2, some drama took place on the final SS. Nakamura / Furukawa lost control on the slippery road surface and went off track. As a result Matsuda / Sugihara went on to take victory in the JN1 class and secure the championship. Not only this, but with Matsuda having turned 70 this year, he is now the oldest title holding racer in the history of the All Japan Rally, no mean feat.

As for the JN3 class, all eyes were focused on whether Koichi Okada / Kunihiko Tsuruta, who had already taken the championship, would be able to grab one last victory in the final round. In the previous round, the “Round 8 Highland Masters,” Okada made it his mission to secure “Kodora” Tsuruta’s championship by the end of the day. This put a lot of pressure on him in the first half, but after his co-driver’s title victory was decided, from the start of Day 2, his times became a little sluggish. For this reason he was determined to come into round 9 with renewed vigor and leave having achieved some good results. Looking back on his performance, he finished Day 1 having built up a more than 1 minute, 30 second margin over 2nd running DE Demio of Akira Shimada / Yusuke Ishiguro. While rivals to the rear were retiring he managed to take the best time in 3 out of the 7 SSs to take victory. Coming in 2nd was the DE Demio of Yukihiro Fujita / Ayako Fujita. With this Okada has made it a 4-round winning streak and has also taken the most wins within any class, with a total of 6 for the season.

For the 2016 All Japan Rally Championship there have been some changes to the class distinctions and next year both the Demio and RX-8 will be competing in the 1.5 liter or less, 2WD JN3 class. There is now a large variety of vehicle choice, with the matured DE Demio, the DJ Demio SKY-D, the competition based SKY-G DJ Demio 15MB and now the RX-8. DE Demio driver, Okada commented, “Although there will be a large variety of Mazda vehicles competing in the JN3 class next year, I would still like to be the one that takes home the championship for another year.” We’re looking forward to what vehicles all the competitors come out with next year.