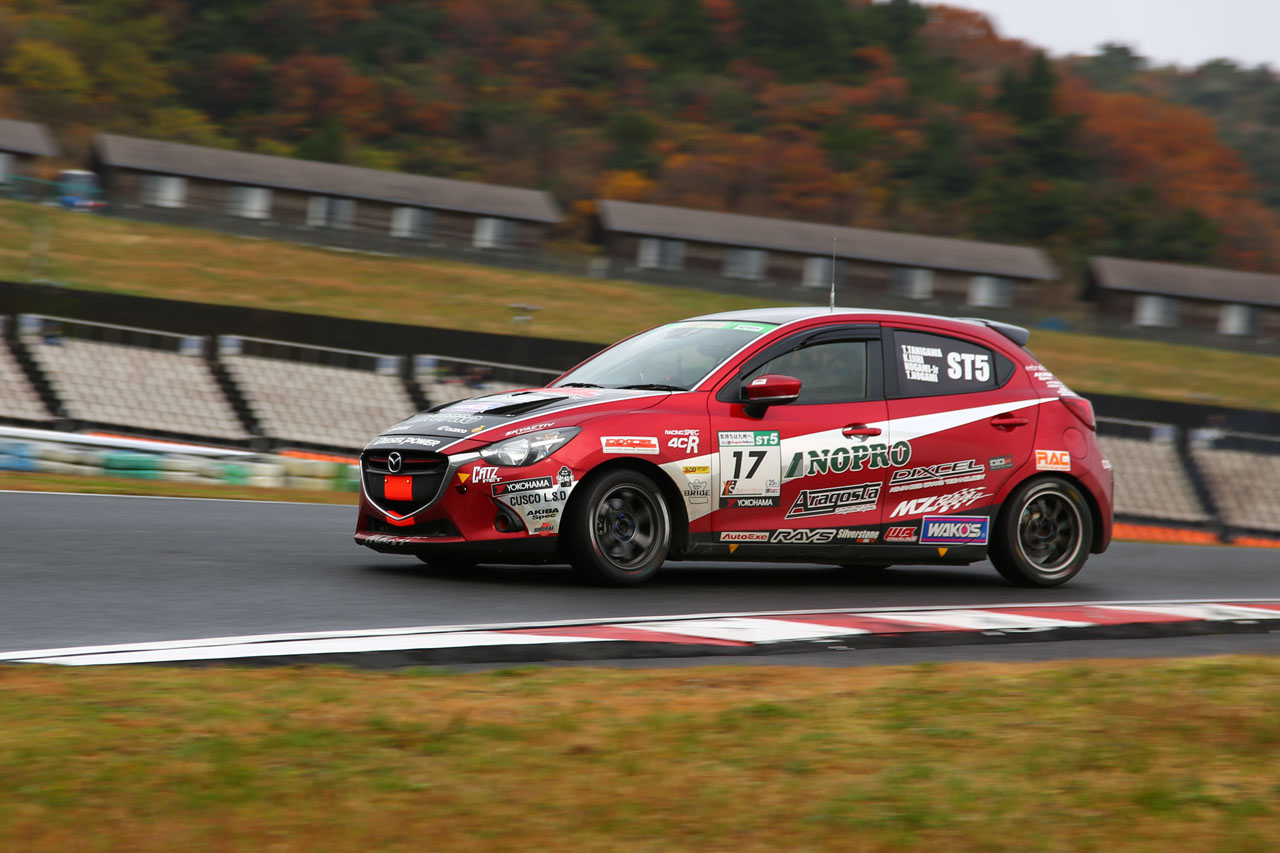 Round 6 of the Super Taikyu series, the last race of the year, was held on November 20th (Sun) at Autopolis, Hita, Oita Prefecture where the NOPRO Demio SKYACTIV-D (Tatsuya Tanikawa / Tatsuya Nogami / Kaoru Ijiri) ended a fierce top order battle in 2nd place. With this they ended the season at 3rd in the series rankings.

This being the first big race to be held at Autopolis since its closure in April due to the Kumamoto earthquake, a large number of race fans gathered from all over Kyushu, including Oita, Kumamoto, Fukuoka, and so on. However, official qualifying, held on Saturday the 19th, met with bad weather and the qualifying session for the ST-4/ST-5 classes was delayed and then ended in a red flag cessation. This meant that the teams would head into the final race having not been able to perform a sufficient number of laps. In spite of this the NOPRO Demio SKY-D, which has had a strong season this year, managed to pass through qualifying with the 2nd fastest time. This would be their first front row start of the season. Right from the beginning of the race, stating driver, Tanigawa was hot on the heels of the pole sitting #19 Fit and, totally unfazed by the wet road surface conditions, continued to put pressure on his rival. Then, when the #19 fell into a half spin, he successfully managed to jump up into the top spot. From there on out he began to pull away from the rest of the pack. However, at around the mid-point of the race the road surface began to dry and after Nogami handed the car over to anchor, Ijiri, the Fits had regained their pace and the #17 unfortunately relinquished its position to the #19. From that point onwards they struggled to try and overcome their rival’s momentum and the #17 NOPRO Demio SKY-D passed the checkered flag in 2nd allowing the three NOPRO drivers to climb up onto the podium.

NOPRO team representative, Toshihiko Nogami stated, “Although the wet conditions in the first half of the race were favorable to the Demio, the dry road surface for the second half was the opposite. This year our car really gained a lot of pace but our speed on the straights is still a bit lacking. We’ll come back stronger next year.” Having sat for a time at the top of the rankings, it was a shame for the team to have missed out on points in round 5 at Okayama. That being said, we really expect big things from the team next season.

Competing in the same ST-5 class, the Murakami Motors ND Roadster (Hiroyuki Murakami / Takeshi Wakiya / Katsuhiko Tsutsui) struggled with the wet road surface early in the race, but managed to catch up in the later stages to only just miss out on a podium finish with a 4th place finish. Team owner, Murakami commented, “We started competing with an ND Roadster this season. We struggled a bit in the beginning but I think towards the end we were pulling out the best in the car. The number of Mazdas competing increased this season so it was a lot of fun. If the number increases again next year I would really like to work together to create a lot of excitement for Mazda motorsports.”

The ODULA Demio 15MB (Takayuki Takechi / Yuichiro Otsuka) experienced some technical trouble on the grid and began the race from the tail end but managed to climb back up as far as 3rd. Although there were hopes that they could push up even further, they met with some further issues and a penalty that saw them fall back down the order. Ultimately, they finished the race in 6th. Starting from 7th place on the grid, the #37 NOPRO DE Demio (Yutaka Seki / Manabe Iwaoka / Yumiko Sekizaki) finished the race in 8th. This year 6 female racers from the Women in Motorsports Project competed in the final three rounds driving a NOPRO DE Demio and completed every race, significantly increasing their racing experience. This was especially the case for Iwaoka, who’s best lap in the final race was nipping at the heels of the pro drivers and clearly demonstrated how much she had developed as a racer.

In the ST-4 class, the TCR Roadster (Teruaki Kato / Tsubasa Kondo / Yui Tsutsumi), which achieved its first victory in the previous round at Okayama, started from 10th place on the grid. Kondo raised them up to 2nd place before pitting in for a driver change, but here they unfortunately had some technical trouble with the crew having trouble removing one of the tires. This unfortunately resulted in a significant fall in position. Kato and Tsutsumi attempted to regain their lost ground but the clock ran out after they had only come back to 8th.

Yoshito Tezuka, who came out from Tokyo to take part in the Mazda team cheer squad, related his impression of the race. “As a race fan, I really have a great deal of admiration for all those in the teams and I came out to have the chance to meet them. It’s really something that you don’t get to do every day so I’m really happy to have been able to do it. It definitely makes a difference when there are fans who come out to watch the events. It’s not only fun to come out to look at the cars but races truly are about the people in the end. To see how the people I am cheering on are racing, how they are competing, is the most interesting aspect for me. This time I was able to meet the drivers and mechanics and really get a true sense of how hard they all work in real time. I want to thank everyone for providing this great opportunity.”