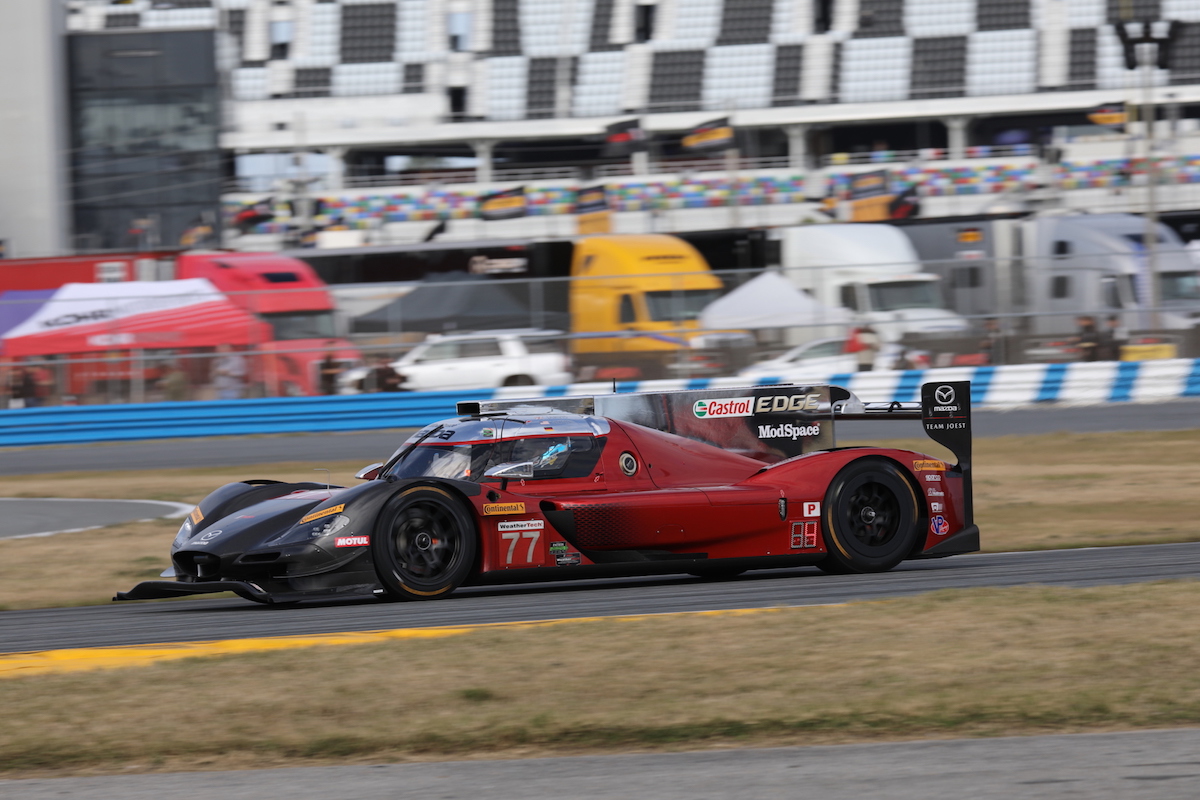 It’s currently Friday, January 26th (USEST) at Daytona, Florida. With large parts of the day allocated to support races, the day mostly acted as a day for team drivers and mechanics that will be competing in the 24-hour race to take a rest.

The official schedule for teams competing in the 24-hour race only consisted of a one hour free practice session held from 9:40am. After briefly talking to members of the media the drivers were early on left to their own devices. During the practice session, Mazda Team Joest only sent out the #77 Mazda RT24-P, which had undergone an engine change on the previous day. The #55, on the other hand, was having its engine replaced today.  Mazda USA Motorsports Director, John Doonan, stated, “Just to be on the safe side we’ve replaced the engines of both cars in the lead up to the race. We are aiming to take overall victory in this 24-hour race so we have been preparing since last year and have implemented numerous durability tests. I have full confidence in the reliability of our cars but we decided to exchange to fresh engines as an extra precaution.”

During the practice session René Rast and Oliver Jarvis drove the #77 and ticked of a number of laps while carrying out several pit work simulations at various intervals. At the end of the session, Tristan Nunez, who knows these cars inside and out, took the wheel. During this session the #77’s best lap time was overall 4th fastest. Not a bad effort in the scheme of things. The top time was marked down by the #31 Cadillac DPi, with the 2nd fastest recorded by the Jackie Chan DCR JOTA ORECA LMP2 that last year ran for a time at overall top in the 24 Horus of Le Mans to take an impressive LMP2 class victory. 3rd fastest was the #90 Caddilac DPi that had been recording good lap times in the previous days practice sessions. The #77 Mazda DPi was separated from the top car by a mere 0.3 seconds and was just 0.06 seconds away from the Cadillac that was 3rd fastest. It seems that the Balance of Performance (BoP) for this year’s IMSA series has been well implemented. With all cars using one-make Continental tires, If the performance difference between each car is balanced then the abilities of the drivers will become the deciding factor. During the practice and qualifying sessions over the last two days, the two Mazda RT24-Ps have shown that they can run in the top group. The team have taken their first step towards achieving their unrequited goal of a first 24 Hours of Daytona victory.

The weather on the 25th was windy and overcast, making for fairly chilly conditions, but things warmed up on the 26th. However, the weather forecast is predicting rain for the 28th. It’s impossible to predict just how much it will rain but occasionally rain can work in the favor of racing teams during an endurance race. Of course, the opposite can also be said. Depending on the conditions the difference in performance between cars can be significantly reduced and if the pace car is sent out for a yellow caution, any margin that leading cars build up will be instantly erased. If the driver’s field of vision is hampered there are likely to be cars going off course and wet patches on the track can cause others to spin out. What type of dramas does this year’s 24 Hours of Daytona have in store for us?

An autograph session will be held tomorrow (Sat 27th) morning where race fans will be able to meet their favorite drivers. With so many famous drivers out this year the crowds are expected to be bigger than ever. A pre-race ceremony will be held at 12:30pm before the race begins with at 2:30pm with a rolling start.