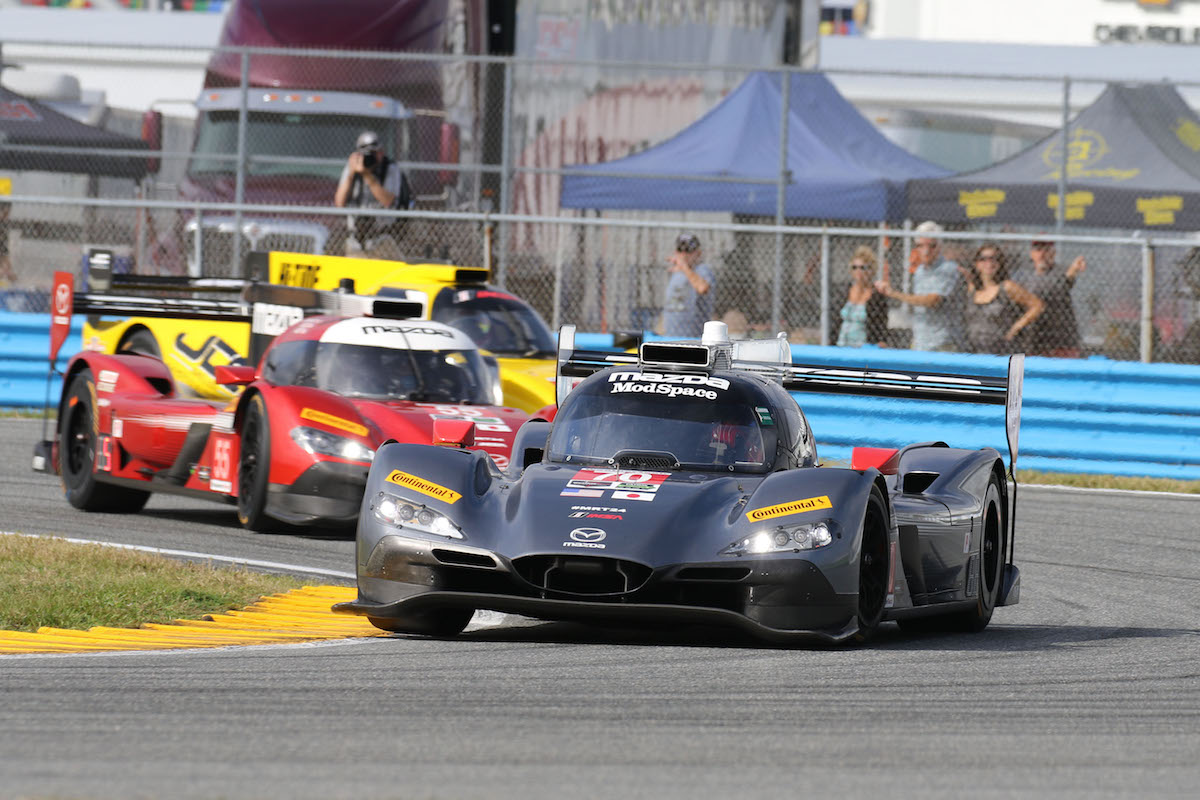 The opening round of the IMSA WeatherTech SportsCar Championship, the Rolex 24 at Daytona, was held over January 28th to 29th at Daytona International Speedway, Florida where the official team of Mazda USA entered its two new Mazda RT24-P prototypes. Although one of the Mazda’s was running in overall 5th right up until the 20-hour mark, a fire caused by an oil leak forced it into a retirement, while the other Mazda was forced out of the race with a mere 30 minutes left on the clock due to powertrain issues.

The 24-hour race began on the 28th under overcast skies that brought quite chilly conditions. Starting from 9th on the grid, the #55 (Jonathan Bomarito) was doggedly running with the top group right from the early stages and gradually made its way further up the order. Meanwhile, Joel Miller’s #70 unfortunately saw a plastic object fly up from the course and into its air intake, forcing it to pit in order to remove it and this resulted in lost time early on. However, from then on it steadily passed through the GT and PC class machines to catch back up to the tail end of the Prototype cars. When it came time to carry out their first driver change to Tom Long, though, the engine stalled when the clutch was engaged. Although he was able to get the car going again, when he exited pit lane he was hit from the rear by another DPi machine and sent into a spin. While the drivers were relieved to see that the damage to the body was not severe, it turned out that they had exited pit lane while the red light had been flashing and this resulted in them being handed a pit stop penalty. This saw them once again full back behind the GTLM class machines. Rain began to fall as the sun went down and for a period the precipitation became quite intense. When the morning approached, however, the conditions gradually dried up. During the night the #70 began to experience a clutch malfunction and was forced to stay in the pits for several hours in order to replace the transmission assembly and returned to the course just after midnight. On the other hand, the #55 had continued to tick of laps at a steady pace and had moved up into overall 5th place. In the past 3 years the Mazda machines have failed to continue running until the dawn, but this time, taking on the challenge with these new machines, both were still running strongly as the sun lit up the sky.

However, “dark clouds often follow the sunshine” and this race proved to be no exception. As the road surface began to dry, the #55 was on the verge of going into the pits to change to slick tires when a fire broke out to its rear and just as it was about to reach pit lane flames could be seen spurting out of the rear cowl. According to Spencer Pigot, who was in the cockpit at the time, “When I was decelerating and heading for the pit I heard a noise coming from the rear and started to smell smoke. I’m OK but it’s pretty disappointing that I couldn’t keep racing.” After the fire was extinguished and an inspection carried out in the garage it was discovered that the cause of the fire was the ignition of some engine oil that had leaked and was not due to any major damage to the engine. At this point the #55 Mazda RT24-P’s dream of completing the race was cut short. While the #70 had fallen 180 laps behind the lead machine by the time it had returned to the track, it was still intent on passing the 24-hour checkered flag. With just 30 minutes remaining, however, it went back into the pits. Due to driveline issues they were forced to pull out of the race. Tom Long, who had been driving at the time, stated, “The gears wouldn’t engage and there was nothing that I could do. Even though we weren’t able to continue racing I’m really grateful to the mechanics who worked diligently throughout the night to replace the gearbox.”

Mazda USA motorsports director, John Doonan, stated, “We came here to tell the story of the Mazda brand and were aiming for victory. Our goals were to still be in the fight come Sunday morning and to be leading in the final lap. Although we were able to achieve the first goal, we were unable to make the second goal a reality. We experienced a number of troubles during this race and learned a lot. The Mazda team aims for victory together and we learn together. We will take home all the lessons we’ve learned at this race. Our two machines ran for a cumulative 38 hours and the experience we gained here will be very fruitful for the 12 Hours of Sebring. Mazda has taken 13 class victories at Sebring in the past. We are hoping to once again get the Mazda banner on the centre pole there.”

The IMSA WeatherTech SportsCar Championship’s 12 Hours of Sebring will be held on March 18th (Sat).

Photo and Text by MZRacing