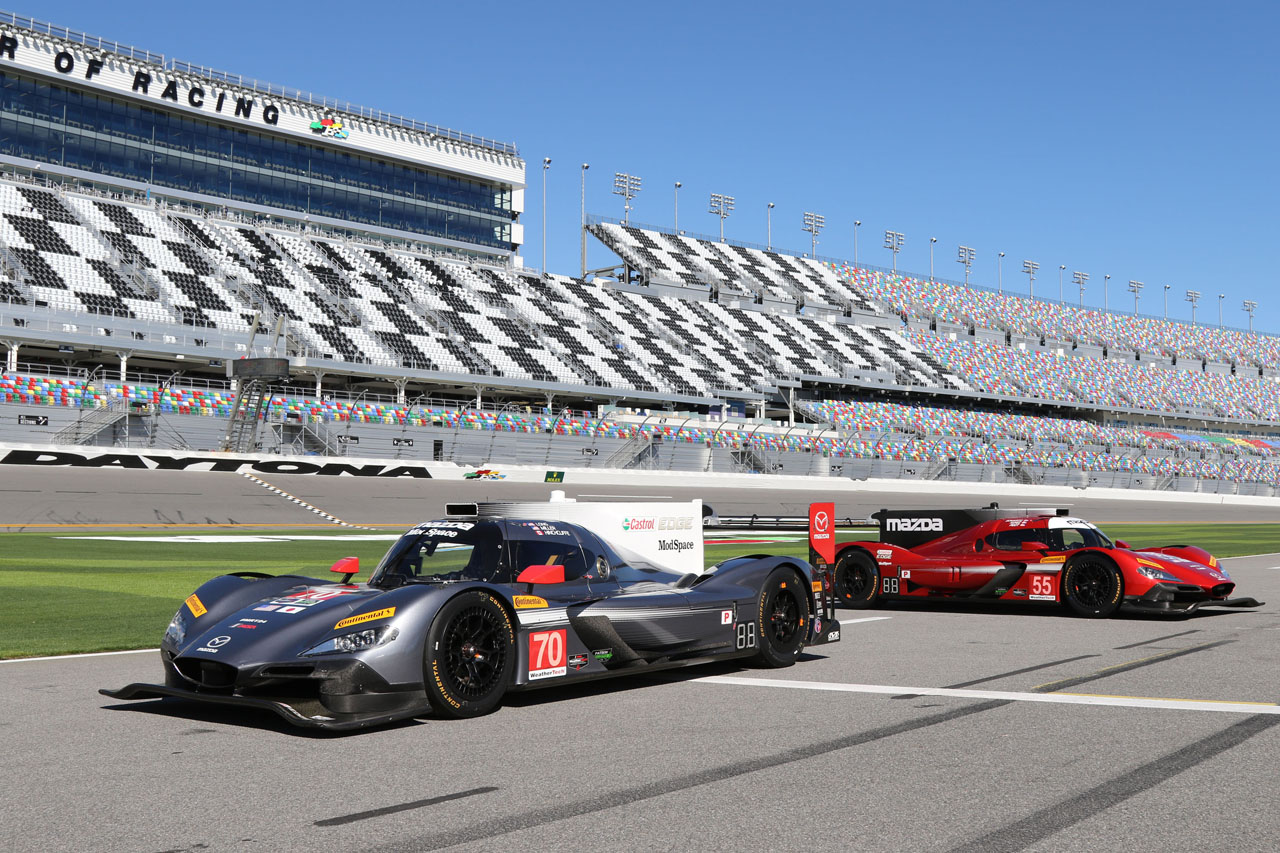 The official schedule of the IMSA WeatherTech SportsCar Championship’s 24 at Daytona began from January 26th (Thur). This first day incorporated a practice session, official qualifying and night practice and all 55 state-of-the-art machines were out on the course and flexing their muscle.

The regulations for the IMSA WeatherTech SportsCar Championship have changed this year, with the Daytona Prototype being done away with and replaced with the new Daytona Prototype International (DPi) regulations. The new machines developed in accordance with these regulations include Mazda USA’s RT24-P that was built in partnership with Riley/Multimatic, the Dallara chassis mounted Cadillac DPi, the Nissan V8 engine mounted, Ligier / Onroak chassis based Nissan DPi, and the Riley/Multimatic chassis based UK Gibson engine sporting Visit Florida DPi. Adding to these the LMP2 chassis (Oreca, Ligier, etc.) machines equipped with Gibson V8s that can compete in the WEC World Endurance Championship, there are a total of 11 prototypes competing in this year’s Daytona 24. Competing alongside these will be the LMGTE machines such as the Ford GT that took victory at last year’s Le Mans, the midship engine mounted Porsche 911, the BMW M6 and Ferrari, while in the FIA GT3 machine competed Daytona GT (GTD) class, the Lexus GT3 and Acura NSX GT3 are garnering a great deal of attention.

At the official Daytona tests held three weeks ago, the Mazda RT24-Ps impressed all those present by immediately demonstrating some serious pace but for official practice the cars got off to fairly restrained starts. In this session the #55 and #70 were 9th and 10th fastest respectively. Their lap times were approximately 2 seconds slower than the those they recorded during the official tests. In the 15 minute official qualifying session held from 4:25pm, the Jonathan Bomarito driven #55 grabbed 9th while the #70 secured 10th with Joel Miller behind the wheel. During the night practice session the team carried out a number of pit stops to confirm the settings of their machines and refrained from making concerted attempts to record faster times. Following on from this, during the final practice on Friday morning they mostly practice driver changes and the two Mazda prototypes were returned to the garage relatively early.

Regarding the preparations for the 24 hour race, Mazda USA’s motorsports director, John Doonan, stated, “The test day was a chance to confirm the potential of our cars and so we went out with a performance-oriented setup and we achieved a pace even better than we expected. However this time around we are looking to race for a long 24 hours. For that reason, rather than focussing on starting several meters further up in qualifying, we focussed on carrying out fairly conservative settings that will allow us to run with consistent lap times throughout the entire 24 hours. There have been no issues with our two cars and our preparations are proceeding without a hitch. Keep your eyes on how we perform right from the race start at 2:30pm tomorrow.” The reason that driver changes were repeatedly practiced was due to the fact that the new provisions have resulted in a much smaller cockpit and narrower driver space and therefore it was essential that the team could carry out changes as smoothly as possible.

The 24 at Daytona will be broadcast live on FOX TV etc and this year will also be aired on Japan’s J-Sports. In the morning of the 29th Yojiro Terada, who has abundant experience at Daytona, will appear as a guest. Keep your eyes on the RT24-P at this year’s 24 at Daytona!