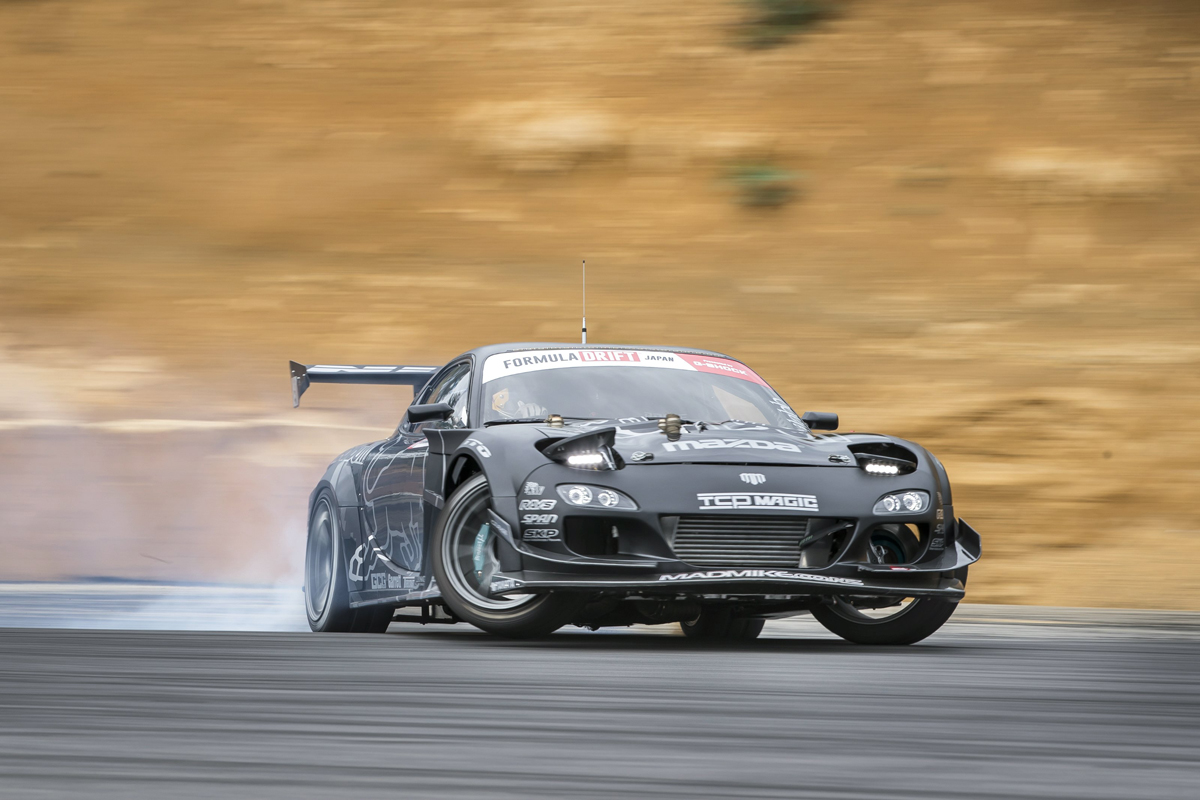 Round 3 of the 2016 Formula Drift World Championship was held over May 21st – 22nd at EBISU Circuit, Fukushima Prefecture, where ‘Mad’ Mike Whiddett (NZ) spurred the 4-rotor, twin turbo “HUMBUL” RX-7, which was built in Osaka Japan by Total Car Produce Magic, to a 3rd place “tanso” qualification that advanced him into the “tsuiso” finals where he took victory.

On the eve of race-day he told us, “Taisuke Kawato (Total Car Produce Magic Director) has done an amazing job of rebuilding HUMBUL from last year. He’s using a lot of the same parts that we use in RADBUL. The configuration of the 4-rotor twin turbo is the same but the sizing and a lot of the parts are different. It runs smaller turbos but bigger injectors and different fuel. It has the new Haltech Elite ECU. This car is very different to drive than our RADBUL MX5. This is very responsive down low with the smaller Garrett turbos. The Winters quick change diff, the Holinger’s 6-speed sequential also now running Total Car Produce Magic type 2 steering kit. It’s a real epic package and I’m feeling really, really confident in this car. We’ve gone out today and qualified 3rd and we missed out in the top spot by only 1 point. I couldn’t be feeling more confident and this is only my second time driving this car.”

Mike’s confidence turned out to be well founded, and he went on to take 1st place after coming out on top of a final battle with Japanese champion, Yokoi. Following his win, an elated Mike stated, “Winning at Ebisu against some of the world’s best is more than just a dream, it’s a 100 per cent determination, a lot of hard work, time and commitment. It’s something we have been charging for, and it meant everything to be on top of the podium. It’s an honour to be competing here against the world’s best and some truly inspirational drivers on their home soil. I really respect the Japanese drivers, they always push 100 per cent. Today our team pushed 101 per cent and we got the win! I’m humbled by the amazing support we have internationally, the Japanese fans really show their passion for the sport and I always get a kick out of being around them, they always have such positive vibes. I would like to say Arigato Gozaimasu to Kawato San and his crew at TCP Magic for believing in me and preparing such an impressive competition car for Formula Drift Japan.”

We at MZRacing can’t wait to see how Mike performs in the next round at Orlando Florida to be held June 3rd to 4th.