Mazda Scores First Podium of the Season at Mid-Ohio 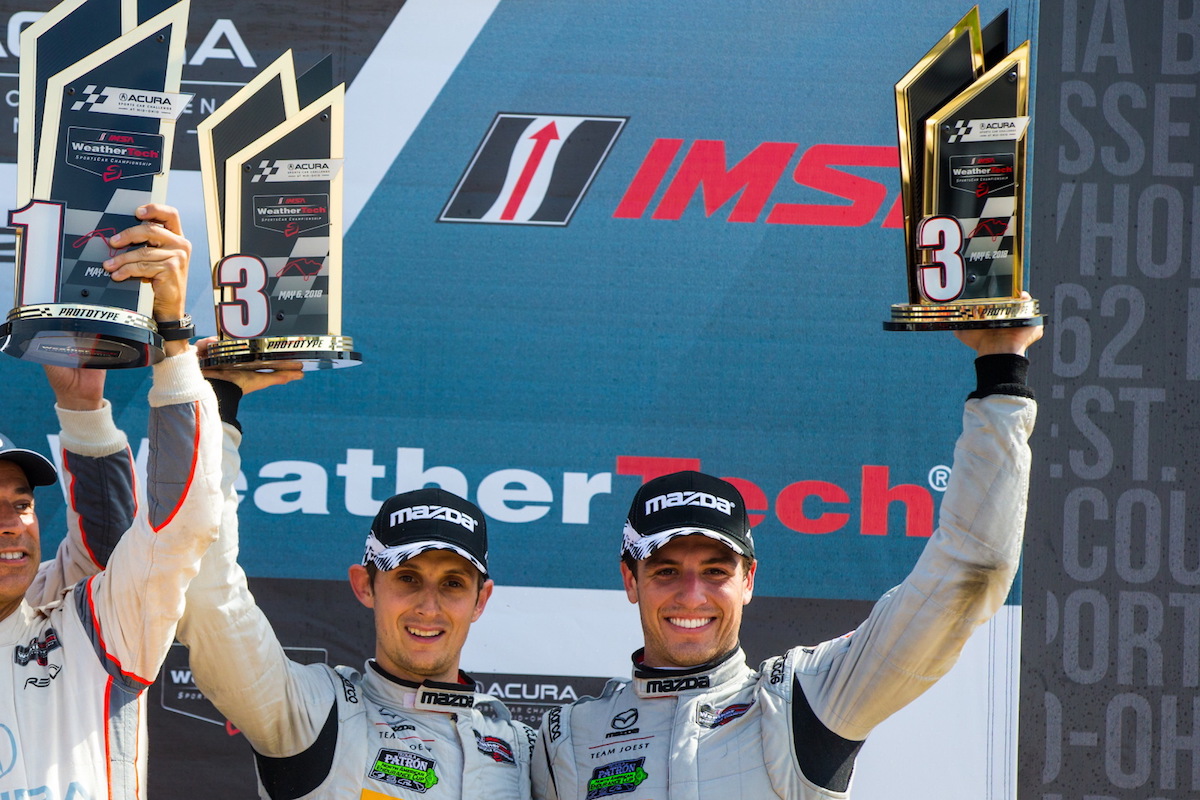 LEXINGTON, Ohio (May 6, 2018) – Mazda Team Joest broke through to record its best result of the season on Sunday afternoon at the IMSA Sports Car Challenge at the Mid-Ohio Sports Car Course.

The historic finish was the first IMSA podium for Mazda Team Joest, the fifth for Mazda in IMSA’s Prototype class, fourth for Nunez and first for Jarvis who was also making his first start at Mid-Ohio.

Oliver Jarvis and Tristan Nunez led the charge for Mazda by finishing in third position in the No. 77 Castrol/Modspace Mazda RT24-P. The pair of Mazda RT24-Ps had shown their potential in qualifying and that speed carried over to the start of Sunday’s two hour and forty-minute race. From the drop of the green flag the No. 77 Castrol/Modspace Mazda RT24-P, started by Jarvis, and the No. 55 Mazda RT24-P started by Jonathan Bomarito, battled at the head of the field. Heavy lapped traffic played a factor nearly immediately, with lapped cars allowing Bomarito and Jarvis to make up ground but at times, but more frequently, lose time to their competitors.

During the second round of pit stops, Spencer Pigot took over from Bomarito in the No. 55 Mazda RT24-P while Tristan Nunez took over the No. 77 Mazda RT24-P as both cars were in the top-three. While making up rapid time, Pigot was hit from behind by a GT-class car, causing damage that forced him to retire from the race.

The next round of the IMSA WeatherTech SportsCar Championship will be the Detroit Grand Prix, held on Belle Isle, on June 1-2, where Mazda claimed a podium in 2017.

“This represents another step forward for the program. I think we had the pace to win this race and a lot of factors played in to the result – obviously the traffic was one and we rolled the dice on the strategy – but to improve every race is what the program is all about and getting on the podium shows the improvement. A podium is fantastic and a true statement to the effort that has gone in from all the partners, and now we are going to now focus on Detroit where we plan to show up and win the race.”

“We showed really well. It was really a fun first hour and twenty minutes when Olly and I were mixing it up with the leaders, and a few times with each other! The Mazda RT24-P was very competitive. Mazda Team Joests did a great job with the strategy and the pit stops and it was just unfortunate how it ended for us. It was no fault of Spencer’s at all, but this track is very easy to have side-to-side contact while you are trying to get by the other cars. After the pit cycle he had a couple of clear laps to try and jump ahead of the other cars so he was pushing really hard and was doing a good job. It’s very unfortunate, but I would rather have that happen and know that we were pushing hard rather than look back and know that we left things on the table. This was a good showing for Mazda with third place and with how competitive we were all weekend.”

“This was a tough finish to the race for Jonathan and I. He had done a great job in the first half start to put us in a position to be on the podium, or win, and the Mazda RT24-P was working really well. Unfortunately, a GT car hit us after just a few laps and right away I knew something was wrong. It’s such a shame for the guys, they gave Jonathan and I a great car and deserved better for all the effort they put in. I’m looking forward to getting back in the car at Watkins Glen and giving them the finish they deserve.”

“It was an incredible race. I enjoyed myself so much – Mazda Team Joest gave us a fantastic car to go racing. I really enjoyed the fight that we had today with four cars battling for the lead of the race. In a way I’m disappointed with some of the lapped traffic wanting to have such a big impact on the race. But the progress we’ve made so far this season is incredible and a big thanks to the team. Now we are going to get back out there in Detroit and try to get that elusive win.”

“I’m truly ecstatic with the effort from everyone at Mazda Team Joest, Multimatic and AER. It’s been a true team effort to get this podium finish, our best finish of the year. We’ve got the best drivers in the world on our team and I’m learning so much. I think we had the speed to win the race, and traffic was tough out there. I think we can learn from this and go to Detroit and be competitive again. The improvement that we’ve had every weekend has been substantial, and I’m excited to get back in the car at Detroit and see where we stack up.”

Text and photos by Mazda USA