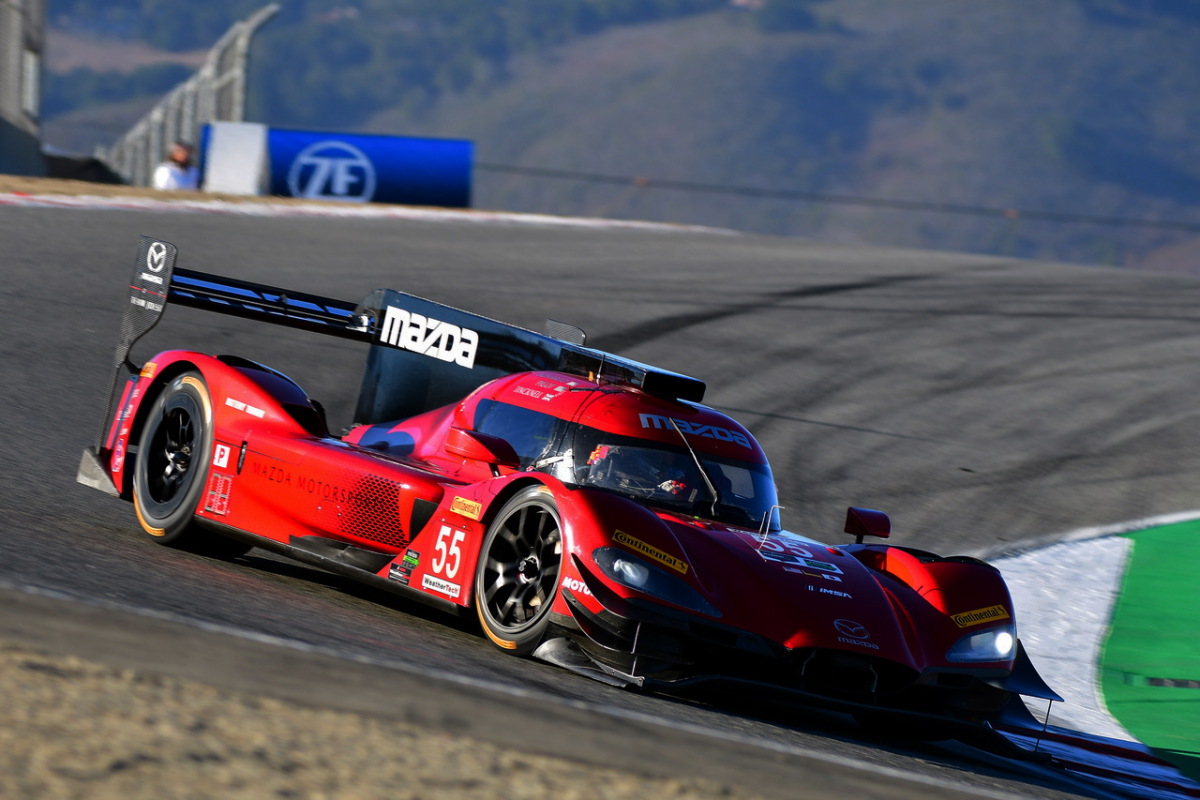 MONTERY, Calif. (September 9, 2018) – A dominating performance for the No. 55 Mazda RT24-P went unrewarded as Jonathan Bomarito and Harry Tincknell teamed to finish in fourth position on Sunday afternoon at the Continental Tire Monterey Grand Prix at WeatherTech Raceway Laguna Seca.

Starting the race from the fourth position, Bomarito advanced two positions to second place before pitting to turn the car over to Tincknell at the first stop. After the round of pit stops was completed, Tinckell had moved to the lead of the race which he continued to grow throughout the race until the closing stages. While lapping another car, contact forced him into a spin and he fell to sixth place.

Recovering and mounting a strong recovery drive, Tincknell advanced two positions and challenged  the third-placed car in the closing laps of the race before taking the checkered flag in fourth place.

The No. 77 Castrol/ModSpace Mazda RT24-P started by Oliver Jarvis ran in fourth place during the opening stint of the race but was slowed by a clutch hydraulic problem when Tristan Nunez took the car over in its first pit stop. The car finished the race in ninth position.

The final round of the IMSA WeatherTech SportsCar Championship will be Petit Le Mans on October 11-13 at road Atlanta in Braselton, Georgia.

“This was a tough result for us, after how dominant the No. 55 Mazda RT24-P was and how hard the team had worked to give Jonathan and Harry a car that they could win with. The weekend started on a tough note for the two of them, but they continuously improved the car to the point that they were the fastest car in the morning warmup. And while I know it was very tough for Harry to be taken out of the lead, he put on a sensational drive afterwards to knock on the podium in the final laps – showing what the Mazda Challenger Spirit is all about.”

“It definitely feels like we were robbed of this win, which would have been a great reward for all of the work that everyone has put into the program to get us to this point. The Mazda RT24-P was really good today, which was obvious by the fact that I was able to run comfortably in second place and that Harry was able to build such a huge lead. A car in front of us was spraying oil, which made it very hard to see, but luckily, I know this place really well and the car gave me a lot of confident to trust it. We’ll take the positives from this and come back just as strong at Petit Le Mans.”

“I feel absolutely gutted that we had the victory so close to us and it slipped away that way that it did. The guys did an amazing job to not only give us a great Mazda RT24-P after we started off the weekend on the back foot, but to give us a strategy that put us into the lead. Jonathan had a great first stint to drive to get the car up to second place, and the team delivered a fast pit stop that got us into the lead. I’m confident the first win for Mazda Team Joest is just around the corner.”

“Unfortunately for us, our race ran into trouble before I could even turn a lap when we had an issue leaving pit lane. Olly had the car in a really strong fourth place, so things were looking pretty good for us but when we lost all that time in the pits we couldn’t really recover. We’ll shake it off for Petit Le Mans – the team showed again today that it’s a team capable of winning.”

“Once the race was finally able to get going and we got into a rhythm, it was great to have the two Mazda RT24-Ps battling in the top-four. I’m not sure we had a car that could have also battled for the victory, but we definitely would have had a good result if not for the issue at our pit stop. I’m confident Mazda Team Joest will be ready to win at Petit Le Mans.”