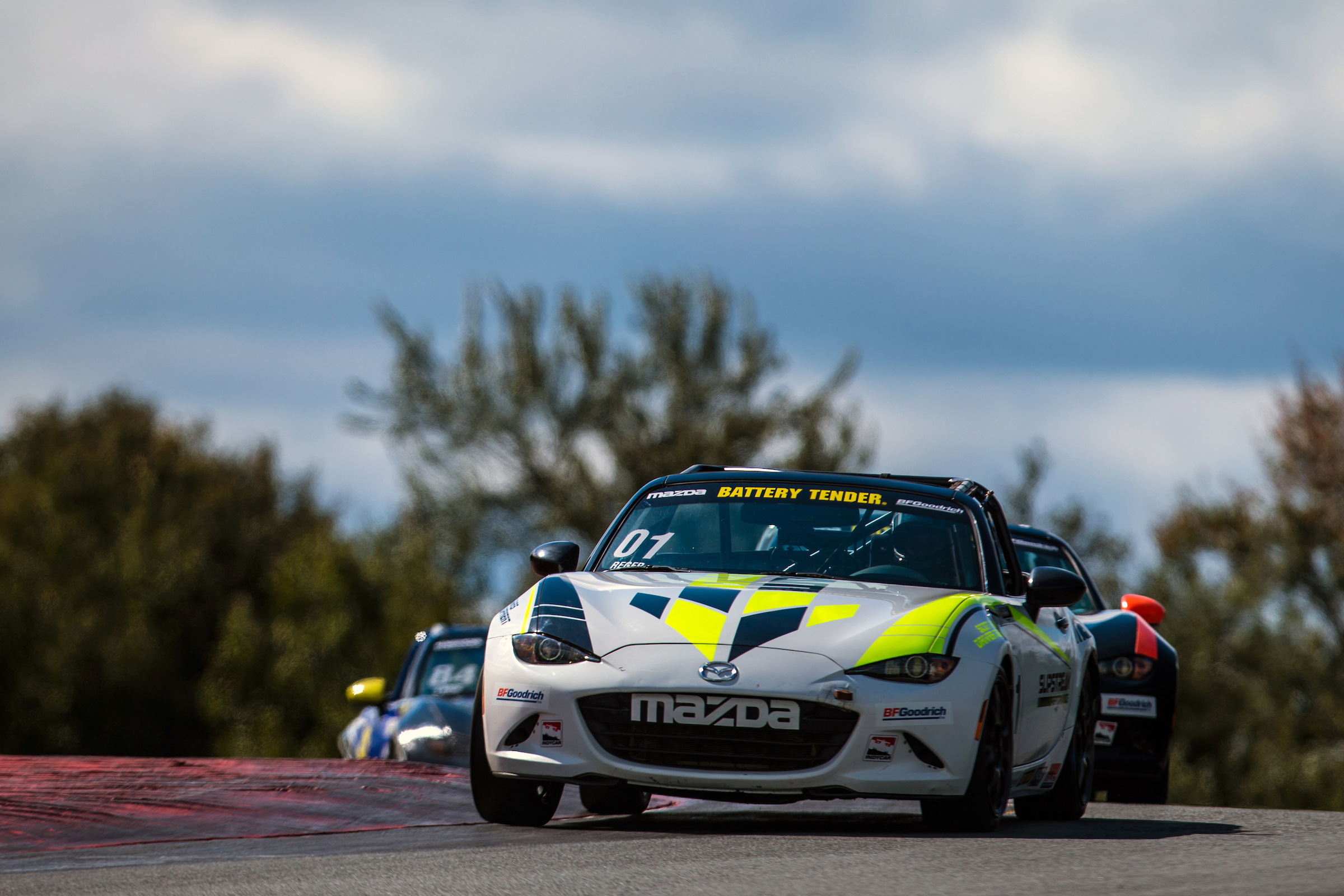 Monticello N.Y. (29 September 2018) –Nikko Reger won the opening Battery Tender Global MX-5 Cup race of the day and then backed that victory up with a run to fourth place at Monticello Motor Club to seal the 2018 championship and the $200,000 in racing support from Mazda that comes with it.

The double race-day championship showdown Saturday marked the debut of the series at the natural terrain New York circuit, and featured two highly competitive events. After the dust settled and the checkered flag on the season flew, some 2,467 passes for position had been made in Global Mazda MX-5 Cup competition this season.

Bryan Ortiz won the second race of the day to move himself to second in the overall championship results after Selin Rollan saw his push for the title compromised on the first lap of the second race when he was caught up in an incident.

Having broken clear of the pack with a double-win weekend at Barber Motorsports Park, Reger had seen his championship advantage narrow to just one point ahead of the race weekend, but made a demonstrative move to claim the title with his race one victory.

After fighting at the front of race two, he was shuffled back to claim fourth as he was grateful to know the title was his at the checkered flag.

“I think that I started on the right leg” said Reger of the Race 1 win. “We have an amazing car and the Slipstream Performance guys worked all night and it paid dividends today. It wasn’t easy, we had a few side by side battles. I’m so content with how the races went and what we did and what Slipstream accomplished. I’m so happy that we got this far. I was concerned about that last restart (in race 2). The guys behind me were getting racy, and I got bumped going into one turn and fell from second to fourth. At that point I noticed I had a little gap to the next car, and the points situation was good, so I thought ‘ok, I’m going to just stay out of this and just get to the checkered.’ It was amazing. I was just screaming in the car.”

Knowing he had to do everything he could if he was going to emerge as champion, Ortiz claimed his first-ever pole position for race one and fought to finish on top of the final race of the year, claiming his third victory of the season in the Copeland Motorsports entry.

“It was a better race than the first one, we made the right changes to the car for the afternoon,” said Ortiz. “We had a lot of patience with our passing and that helped in the end so I’m very happy to win! We started the year with a win and now we close out the year with a win. We didn’t get the championship but it was a very good year. ‘Yo no me quito (“never give up”) was the big thing this year and I want to thank Mazda USA for the great opportunity to race in this great series and to all my sponsors. Copeland Motorsports did an awesome job, and lets see what we will do next year!”

Todd Lamb finished second in both races in his Atlanta Speedwerks entry, allowing him to also lock in the Masters class championship.

“This was a repeat of the first race,” said Lamb of his return to the overall podium. “I’m still pretty happy with finishing in second. We led a bunch of laps and the car was fast. I’m happy with second and we had a good showing here and we showed that maybe we’re back to contend for it next year.”

The race event at Monticello Motorsports Club was the home event for Alex Wolenski, who is the Chief Operating Officer of the motorsports resort campus. Having a large points advantage in the Challenger class championship ahead of the weekend wasn’t enough for Wolenski as he put his stamp on the championship with two Challenger Class wins on the weekend.

“I came into this second race saying ‘I’m at my home track, so I’m going to just have fun,’” said Wolenski. “And it was a lot of fun. I recommend racing in the Global Mazda MX-5 Cup to anybody. This is the most fun I’ve ever had in my life, and it’s about the rollercoaster of emotions. There’s good days, there’s bad days, there’s celebration and you have to fight every lap of every race. This has to be the most fun form of racing I’ve ever experienced.”

Michael Dinan doubled down for McCumbee McAleer Racing to claim both Battery Tender “Hard Charger” awards for making up the most positions in each race.

Closing out the honors on the weekend was Slipstream Performance, which claimed the VP Racing Fuels “Clean Image Award” for the team’s presentation and paddock presence.

The Monticello event marked the final race of the 2018 Global Mazda MX-5 Cup season, but it is not the end of the competition as the series will stage a two-race Global Invitational at Sebring International Raceway on November 7-9, with $50,000 up for grabs for the event winner.