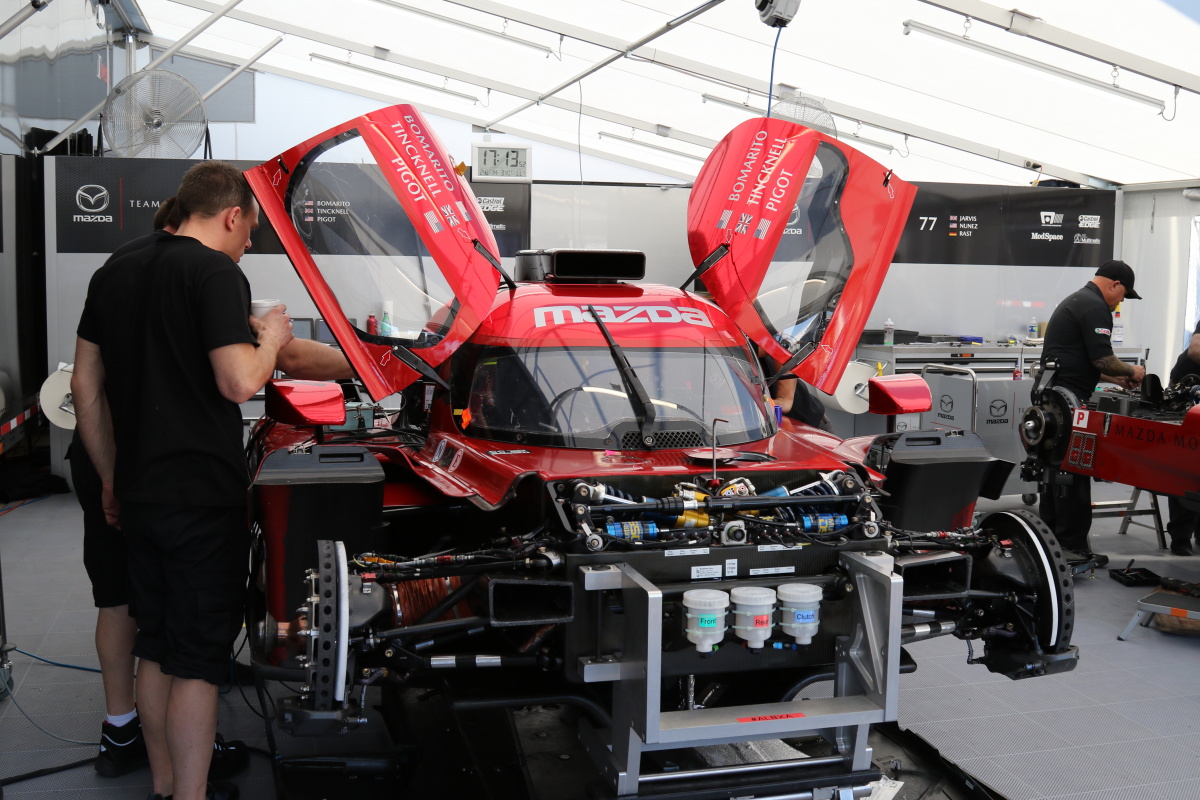 IRVINE, Calif. (March 13, 2018) – In the six weeks that have followed the Rolex 24 at Daytona, Mazda Team Joest has maintained the flat-out pace that the Mazda RT24-P’s showed in the season opener of the IMSA WeatherTech SportsCar Championship.

With their bid for victory at Daytona slowed by mechanical issues, the team set forth on an ambitious testing and development program ahead of the 12 Hours of Sebring. Much like at Daytona, where the Mazda RT24-P qualified 3.3-seconds faster this year than it did in 2017, the team has seen a similar improvement in testing on the 3.74-mile Sebring circuit made up of the former runways of Hendricks Army Airfield.

The circuit, known for its bumpy surface and combination of high-speed and technical, low-speed corners creates the most demanding race for both car and driver on the IMSA calendar.

The heavily-revised Mazda RT24-P is the latest in a long line of Mazda racers to take on the challenging 12 Hours of Sebring, as thirteen Mazda-powered cars have claimed victory at the 12 Hours of Sebring. Thirty years ago, Al Bacon, Amos Johnson and Dennis Shaw capped an eight-year winning streak for the Mazda RX-7 by winning at Sebring in IMSA’s GTU class. Mazdas have also taken victory in IMSA GTP Lights and ALMS P1.

The driver lineups from Daytona remain unchanged, with the No. 55 Mazda RT24-P to be driven by Jonathan Bomarito, Harry Tincknell and Spencer Pigot while the No. 77 Castrol/ModSpace Mazda RT24-P will be driven by Olly Jarvis, Tristan Nunez and Rene Rast.

Quotes
John Doonan, Director, Mazda Motorsports
“While our results at Daytona were far from what we hoped, the transformation of the entire Mazda RT24-P package from 2017 to now was a huge positive to take away. As any top program would, we took all the issues we faced at Daytona, understood the root causes, and put together solutions with the support of all of our technical partners. The good news is we validated all of our solutions at the recent Sebring test and we head into race week confident that we have those items addressed. Our goals have not changed. We are going to the race track to win for the Mazda brand and our fans. We want nothing more than to hoist the Mazda name and Japanese flag up on the front straight wall at Sebring.”

No. 55 Mazda RT24-P
Jonathan Bomarito
“The most challenging part of the 12 Hours of Sebring is how physical the track is. It wears you out physically more than any other track, and it can also be very hot and humid. But I think we will have a good pace for the race as we have tested at Sebring quite a bit over the off-season. 12 hours is a long race but I am confident we will be fighting up front in the Mazda RT24-P.”

Spencer Pigot
“I have a lot of good memories at Sebring, so it’s always fun to go back. My car racing career kicked off there when I won the Mazda Karting Shootout and a scholarship to race in the Skip Barber National Championship in 2010. This will be my third 12 Hours of Sebring and in my opinion, it’s the most challenging endurance race of the year. The track is very hard on the car and driver because of the bumps, and the darkness at night adds another challenge. It requires 100% concentration every lap and there isn’t much time to rest. I expect us to be challenging at the front throughout the race in the Mazda RT24-P. The team has made a lot of improvements since we raced here last year and I’m confident they will pay off.”

Harry Tincknell
“Sebring is a very bumpy circuit, and we’ll have to set up the Mazda RT24-P accordingly but our technical partners Multimatic know a thing or two about dampers and suspension. I had a very good feel for the car from the test. This will be my first time racing at Sebring and I can tell it will be a tough race as there are some tight and twisty sections where you have to take some risks to avoid losing time. But, I am confident we can be competitive. We were on the pace at the test, and I think we’ll be right on the pace during the race. Mazda Team Joest have done a great job so far and I’m hoping for a big step forward from Daytona.”

No. 77 Castrol/ModSpace Mazda RT24-P
Oliver Jarvis
“I have great memories at Sebring having won the race in 2013 in my only participation, so it’s an incredible feeling to be going back and once again having the opportunity to fight for the outright win in what is undoubtedly one of the toughest sports car races in the world. It is one of the most physical demanding tracks in the world – not to mention one of the toughest on the car itself. With the bumpy nature of the track and having very few long straights it places huge stresses on the driver, and it is also an extremely difficult track to navigate through the traffic. We know we have some extremely strong competition, but the aim as always is to fight for a podium. With the strength of the field and the demanding nature of the track we have to be on top of our game to achieve this.”

Tristan Nunez
“Sebring was the first track where I got on the podium in a professional race, back in 2013. It’s a very challenging track, especially with the bumps. The bumps make it extremely physically demanding when you are going around, lap after lap, especially if you are doing multiple stints during the race. You also need to have a very high commitment level – turn one and turn 17 are, in my opinion, the biggest commitment corners of any track on the schedule. It’s an extremely difficult track and race, and it’s very unpredictable so it can be anyone’s race if you make it to the end. I’m hopeful for our chances and for the speed of the Mazda RT24-P.”

Rene Rast
“I haven’t been on the podium at Sebring yet, but it’s one of my favorite tracks. It is still one of those tracks where the driver can make a difference as the track itself is very difficult and technical, especially turn 1 and turn 17 – those are my favorites. The combination of the bumps and the traffic make Sebring very unique. When the darkness comes into play it is even more challenging, but the track itself is already a big challenge alone due to its layout and surface. The Mazda RT24-P suited the track very well in testing and our pace was very promising, and I’m convinced we have the right team for us to come back strong for the 12 Hours.”